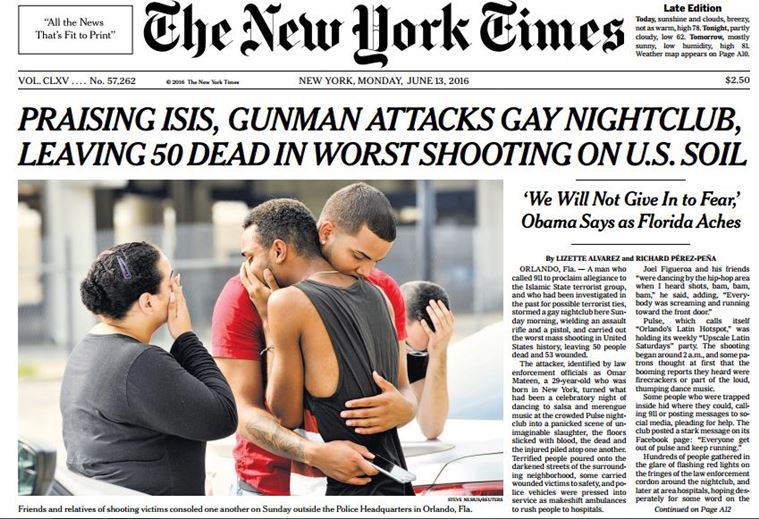 What took them so darn long? We’re rapidly approaching the two year anniversary of the Pulse nightclub shooting in Orlando, yet we’re just now discovering some facts about the case that are kind of important. Facts that actually set the record straight.

For almost two years, Omar Mateen, the Pulse Nightclub shooter, was thought to be a reticent homosexual. A few of the patrons even swore they had seen him at the club, trolling for homosexual hook-ups, or whatever they’re called.

It was said he specifically picked this nightclub because of his repressed homosexual feelings. Even his ex-wife from several years ago, Sitora Yusufiy, said that she had noticed behavior that made her wonder if Omar was straight. Of course she didn’t say this, and probably never noticed it until the media began running with the narrative that Mateen was a closet homosexual. Once suggested to Yusufiy, her mind picked up, and ran with it. It’s like the old: “You know – now that you mention it – he was acting a little strange,” or something like that. It’s also why the practice of attorney’s “leading” witnesses is frowned upon. The power of suggestion can be very powerful indeed.

I mean - after all – it was a gay nightclub. What other motivation could there have been?

The Palm Beach Post ran an article that, knowing what we know now, was completely without foundation or fact. But the narrative that Mateen was gay had been well, but falsely established, and had already taken hold and sort of 'grew legs.'

“The FBI is investigating reports that Orlando nightclub shooter Omar Mateen used gay dating apps and regularly visited Pulse before he shot more than 100 people inside, killing 49. At least five people have come forward saying they saw Mateen at gay clubs, painting a complicated portrait of the American-born Muslim whom the FBI believes was radicalized by terrorist groups.”

To be clear – I’m not defending Mateen in way. He was a scumbag terrorist and I couldn’t care less whether he was homosexual. My point is that once the narrative, or speculation, is offered up as more than just that, group-think begins to infect the incident. Then the old “now that you mention it” scenarios develop lives of their own. This may actually hamper rather than assist in an investigation.

How much time did the FBI waste attempting to follow leads because several people came forward to say that Mateen had homosexual encounters with them and others?

On June 23, 2016, the L.A. Times wrote that, “In seeking to verify the reports, federal agents have culled Mateen's electronic devices, including a laptop computer and cellphone, as well as electronic communications of those who made the claims, law enforcement officials said. So far, they have found no photographs, no text messages, no smartphone apps, no gay pornography and no cell-tower location data to suggest that Mateen — who was twice married to women and had a young son — conducted a secret gay life,” the officials said.

As we now know, Mateen evidently did not know the Pulse nightclub even existed before that evening. Yet for almost two years we’ve been led to believe that this was an anti-homosexual hate crime, which fit the left’s narrative of garnering additional sympathy and support for the LGBT community.

Of this, Glenn Beck says that, “Instead of having a discussion on the dangers of radical Islamic terrorism and ISIS, we were having discussions on gay rights, how Republicans were turning gay men into killers with their repression, and hate crimes on the gay community.”

We now know that Disney was his intended target, but he was scared away from that location because of the presence of “armed” security. Imagine that. Yet people still ask me why I open carry.

Mateen then got back in his car and searched for “downtown Orlando nightclubs.” As it was well after 10 PM, this would have been the logical choice. One way or another, he was going to carry out an attack that night.

Two clubs came up, The Pulse and Eve nightclubs. Apparently he was heading to the Eve, when he changed course and instead went to the Pulse. Gay, straight – it did matter to him. He wanted to murder Americans. That’s it.

This act was the act of a radical Islamist. It had nothing at all to with anything but killing Americans. Yet as we’ve seen on many occasions, the narrative appears too often to overshadow the truth. This was a case study of it.