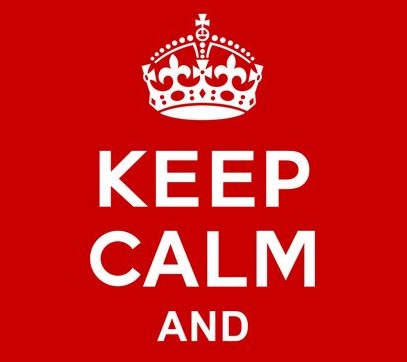 Last week, while visiting a high school friend at his company’s warehouse, I noticed one of his employees wearing a shirt which had the words The Power of Calm, printed on it. I started thinking about this concept - The Power of Calm. So here are some thoughts on when calm thinking and living could direct us to the best action. Which would you like to embrace? The calmness as a plan of attack, or the chaos of a panic attack.
There is power in remaining calm, especially when the situation requires it. The ability to find ‘calm in the chaos’ upgrades your life. In chaotic times, we don’t need to control our impulsive thoughts, we need to stop letting impulsive thoughts control us. Here’s an example of The Power of Calm.
There were two men shipwrecked on an island. One started screaming and yelling. “We’re going to die! We’re going to die! There’s no food. There’s no water! We’re going to die!” The second man was propped up against a palm tree, so calm it drove the first man crazy. “Don’t you understand? We’re shipwrecked on an island. No food. No water. We’re going to die!” The second man replied, “You don’t understand. I make one hundred thousand dollars a week.”
The first man looked at him quite dumbfounded and asked, “What difference does that make? We’re on an island with no food and no water. We’re going to die!” The second man answered, “You just don’t get it. I make one hundred thousand dollars a week and I tithe on that one hundred thousand dollars a week. My pastor will find me!” Aha!
There is a cost in losing your calm and cool. Moses couldn’t cross into the Promised Land because of losing his calm when the people of Israel were being, dare I say, the people of Israel. Awkward! Look at Peter and Jesus on the night Jesus was betrayed. Peter had a panic attack and cut off the soldier’s ear. Jesus had a plan of attack and calmly healed the soldiers ear, good as new, amid the chaos of a betrayal.
The story of the prodigal son shows us the contrast between the power of impulse and the power of calm. The prodigal son wanted his inheritance before he died. He was an instant person, wanting instant things, instantly. Soon the son was living in squalor and chaos. His money gone, his identity shattered, his friends abandoned him, and he was living on a diet of leftover pig fodder. Where was his father? Sitting on the porch of his house waiting for him. He found calm in the chaos.
His father missed him but hoped the son would come back. The prodigal's father had more faith in his son than the son had in his father. He knew the Power of Calm. That’s not to say the Father wasn’t concerned. But the father was not going to let his thoughts control him like his son did. Perhaps the father was like that saying by Michael Caine: “Be like a duck, calm of the surface but peddling like the dickens underneath.” Jesus calmed storms on the outside of people, and He calms storms inside of people too. It takes real God-power to calm both.
Here’s a Power of Calm lesson.  Karen Salmansohn states, “When you can’t control what’s happening, challenge yourself to control the way you respond to what’s happening. That’s where true power is.” David Allen says, “Patience is the calm acceptance things can happen in a different order than the one you have in mind.” One more quote on calm by Mason Cooley for you. “Romance is tempestuous. Love is calm.” Someone needs that.
Calm down the non-stop chatter in your head. God has a plan of attack while we generally have a panic attack. Train your mind to intellectually act, not emotionally react. Remember, God’s not in the strong wind, earthquake, or fire. God most often is in the sound of a gentle wind. 1 Kings 19:9-13. God whispers because God is close...and calm.
Ed Delph   CCC      April 9, 2018
Copyright ©2018
Read more by Ed Delph
Tweet