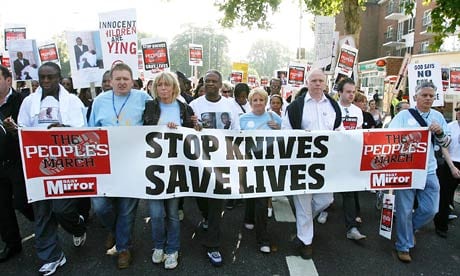 Whats next - Forks, spoons, scissors, nail files, pointy sticks? Welcome to the brave new world of snowflake sanctuary cities.
Well, folks, it’s finally happened. After having inadvertently proven that banning guns does not keep people safe, the radical liberal mayor of London announced that he now had the answer to his city becoming the new murder capital of the world.

According to the Washington Times; "London’s Sadiq Khan, the first Muslim to assume a mayor’s role for a major Western city, thinks he’s found the cause of the uptick in stabbings his community’s seen in recent times — wayward knives. And as such, he’s banned the carrying of knives in the city.”
Well, I feel better now.
However, why stop there. Once the new knife bans prove useless for preventing murderous thugs from preying upon their defenseless neighbors, maybe he can also ban cars, blunt objects, and sharp sticks. And when that doesn’t work he could always mandate that all citizens must wear mittens when out in public to keep them from strangling one another.
While this liberal nonsense deserves the head-shaking scorn that all sensible people feel, never forget that we have our own ‘home-grown’ brand of liberal Democrat mayors right here in the US who are just one pen stroke away from foisting similar absurdities on the perpetually hysterical snowflakes that make up their cities.
Think they couldn’t get away with it?

They’ve already banned guns, which is not working, and what are they going to do next to appease the marching teenagers when they run out of river rocks to throw at the next nutcase attacking a school, or the next drive-by gang banger who mows down bystanders on the streets?

They’ve already put up all those “gun free zone” signs which also don’t seem to be working. Darn! Can’t those murderers read? They must find something else new to blame, to excuse their inability to do the only thing that would make a difference…arrest the bad guys.
They must find something to deflect attention from their lethal political correctness, so after banning guns, knives, and common sense, why not blame something else? Perhaps they could blame the victims of violence for not being more accommodating to their potential predators, and have them carry signs saying, “Undefended! Easy Target! Come and get Me!”
I know, I probably shouldn’t give liberals any ideas.
You have to wonder though - by what sad and strange twist of logic they come to the conclusion that complete and abject surrender to all forms of physical aggression will somehow make them safer? This flies in the face of not just all human behavior, but the very existence every living thing on the planet!
Evolution has no patience with good intentions or pacifism. Nature is quite adamant on that subject. If you don’t fight to preserve yourself, you and your species go extinct. Period. And as pleasant a thought that the liberal lemmings' goal of unilaterally disarming themselves might be, hustling them off the cliff to nonexistence, the equally unpleasant thought that their power at the polls could take the rest of us down with them, cannot be ignored.
What is most disturbing though, is the question of why more people, especially the young, are coming to think that not only do they not have the right to defend themselves, but they should prevent you from having it too.
Where did this self-image of seeing oneself as helpless victim originate?
That one is easier to answer.
It is the trickle-down insecurity and self-loathing that the liberal elites have insidiously, but brilliantly, insinuated into our schools, parenting, and PTA.
It began with the rise of the status of “victimhood” becoming a coveted role in progressive circles. Then, since those not lucky enough to be born into some favored status of the oppressed, were designated to occupy the bottom rung of the social pecking order, there was no choice but to create a category of victimhood that everyone could claim. For that, they trotted out, ‘bullying.' After all, who hasn’t been bullied?
In the old days your only option was to fight, and from that, you learned that despite a few black eyes and bloody noses, bullies didn’t like getting hit back and would usually leave you alone and seek out easier targets. The same principle applies to thugs and criminals. They don’t much fancy mugging, robbing, or raping someone who fights back - especially if that person is in possession of that little item of blued steel that Sam Colt called, 'The Equalizer.’
Liberals don’t feel that way. They have been brought up to believe that your natural state is to be a victim and that your only recourse is to have someone in ‘authority’ fight your battles for you. It begins in grade school when liberal kids are taught to “tell their mommy” or the teacher, and continues through college where they demand ’safe spaces’ and the silencing of any speech that might unsettle them. Thus, what can you expect when they become adults and voters and elect politicians who promise to ‘mother’ them and make all the bad people behave?
That, of course, brings about the sad and all too often final act in this pathetic show of abrogation of all responsibility for self-defense. They believe their own myths of calling on the adult version of the teacher or their mommy - the police or government - to protect them from the bad people. Great - problem solved - except for completely forgetting the unfortunate reality that all too often, “when seconds matter, police are only minutes away.”
Perhaps another sage and great patriot summed it up best, Ben Franklin, when he said, "Those who would give up essential Liberty, to purchase a little temporary Safety, deserve neither Liberty nor Safety.”
Sadly this is exactly what the doctrine of Liberalism leads to. Let’s work to make sure that it doesn’t infect the rest of us.
Copyright ©2018
Read more by Ric Wasley
Tweet