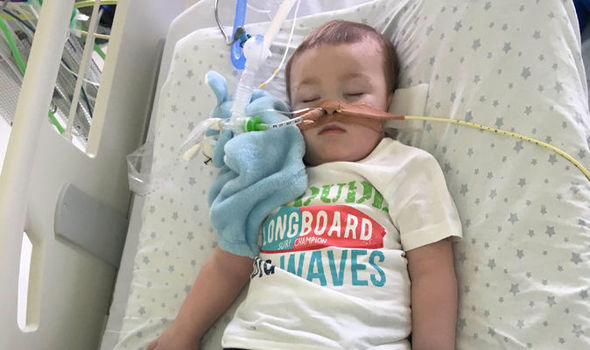 The case of little Alfie Evans is a tragic one. At 23 months old, this healthy boy developed a rare neurodegenerative disorder that left him in a semi-vegetative state. That’s strike one against the poor little tike.

Strike two is that he and his parents reside in England, the poster nation for socialized medicine. And strike three is that, given enough time, every nation with socialized medicine will eventually be forced into the development of death panels.

In England the defacto “death panels” is the British court system. The courts decide who will live and who will die. The courts have decided the latter of the two fates for Alfie. They have condemned him to death with no stay of execution, no pardon and possibility of parole.

This is funny (not 'ha, ha' funny), considering Great Britain has long ago rejected the death penalty for the worst criminals and terrorists among them, but seem to have little problem sending a two year old to death row.

But you may ask, what more can the English health system to do? Spend money hand over fist on what the doctors know is a lost cause? Someone has to make the hard choice and say enough is enough.

This may be true, if Alfie’s parents were insisting that England continue to pay for what the doctors insist is pointless.

But this is not what the parents are asking of the medical and judicial oligarchy.

Thanks to Pope Francis and the Italian government, Alfie has been granted Italian citizenship. By doing so, he would be able to be transferred to the Vatican hospital for treatment.

This is where the statists show their hand for what it really is. Despite alleviating all financial responsibility from the British health service with the move to Italy, England’s High Court still ruled that Alfie cannot leave the country. Instead, his parents must accept their fate and allow Alfie to die like a good British serf.

British doctors treating Alfie know, without a shadow of doubt, that there is no hope for him. This they know, despite history being replete with cases of medical miracles.

So the question we must ask then, is why? Why do the British courts care if his parents want to take him out of the country? Even if the doctors are right, what does it matter? Why not just let the parents take the kid?

This answer is of course one of State control. It can only matter if those in charge really do believe that they know better than us all. Thus only they have the capability of deciding what is best for us and our children - for they aren’t really just our children, but all are wards of the State.

What we are witnessing is the progressive statist’s red-line in the sand, and Alfie just happened to end up on the wrong side of the line, so he must and will now be made an example of.

However, things have not gone the State’s way. Alfie was supposed to have died by now. He wasn’t supposed to last more than few hours off the ventilator, which should tell us all something. These doctors, these experts, don’t know everything. They evidently know nothing of the fighting human spirit and the power of faith and prayer. And even if you believe none of that, you must agree that there are many things doctors still do not understand.

But now that the State has taken such a hard line, it finds itself stuck between a rock a hard place. Because they’re stuck they’ve opted to take the hard line in an effort to stall for time. Time they know, or at least hope, that little Alfie does not have.

Alfie must die in England. If he is allowed to travel to Vatican hospital, and by some miracle, they are able to successfully treat the boy, it will be Katy bar the door, and riots in the streets of Great Britain. The courts and the doctors would be forced to explain themselves. This would be intolerable and antithetical to State control.

That’s what this is really all about.