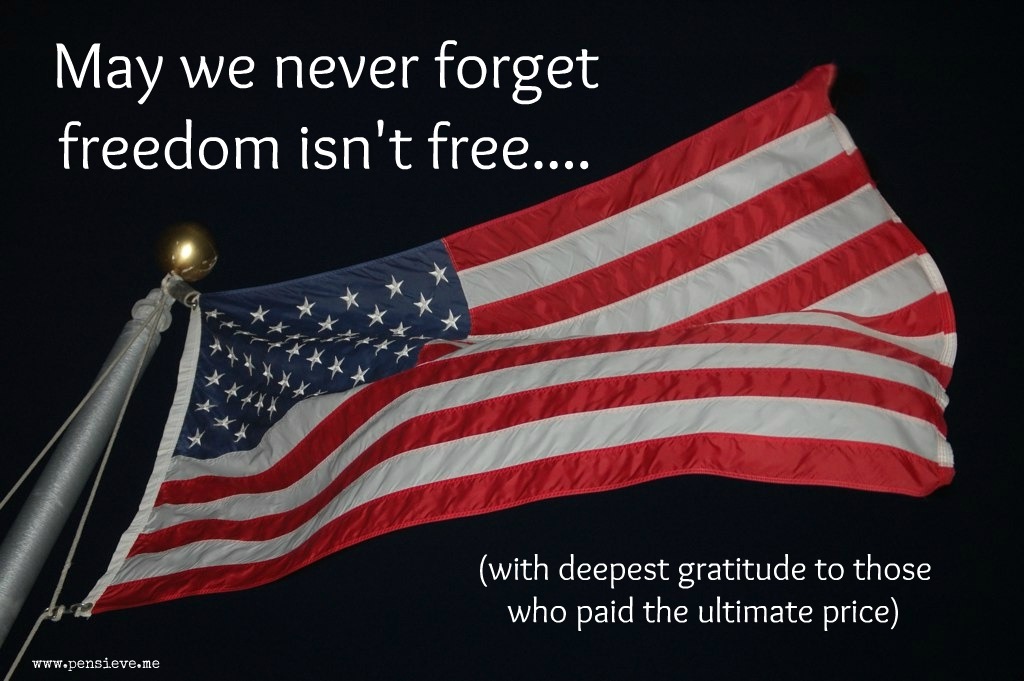 On Memorial Day we rightly honor all those who have shed their blood to defend America and keep the dream of freedom alive.

In addition to those heroes, we should also honor all of the ordinary Americans who care enough about what our country stands for, to do everything - no matter how small - to prevent those, both here and abroad, who fear the freedom we represent, from dismantling our principals of liberty.
Since the founding of America, there have been those around the world and even within our own borders, who have not only resented but despised our country’s commitment to freedom, liberty and the rights of the citizen over the state or rulers.

Never forget that fully one-third of the population of the original 13 colonies opposed us gaining our independence from Britain and many of them left, fearing a government "of the people," rather than continue to live in the new United States of America.
Over the next two hundred years, monarchs, dictators, and totalitarian regimes have hated and feared the beacon that our freedom cast and worried that it would attract their own downtrodden peasants and serfs to flee their oppressors for a chance at opportunity and liberty.

They were right to fear freedom because those people did flee to the US and wound up making us the strongest and freest country in the history of the world.
However, success breeds jealousy and hatred, so when the dictators and tyrants were unsuccessful in destroying America militarily, they set about to undermine the principals of freedom and equality upon which we were founded. That continues to this very day.
That’s why we see hoards of people from the countries that daily chant, “Death to America!” - clambering to get into our country by any means possible, and sadly most often illegally.
Even the countries that we have rescued from tyranny and continue to protect to this very day, maintain a not-so-subtle contempt for America, even while expecting us to continue to provide protection as well as funding for a world body, the United Nations, that treats us with contempt while holding out its hand for largess.
Those who despise America and everything it was founded upon - fought and bled for - are not just limited however to beyond our shores. There is still that group of about one-third of the population, who from our first founding, believed that a king or powerful group of oligarchs were needed to curb the rights of the ordinary individual and force the population to behave in ways dictated by themselves. Today they go by many names. In this country, they call themselves 'Liberals,' 'Progressives,' or 'Democrats' - often all three.
In other parts of the world, they go by titles like Ayatollahs, Marxists, Premiers, El Presidente, and Dictator-for-Life. They see America as the only impediment to bringing the entire world under their totalitarian regimes.
For years the various groups and governments that chaffed with the knowledge that there was a single place that stood in the way of their desire to force people to think and behave as they demanded, fumed in their disparate groups.
Now, however, they have found they have a common enemy that unites them in their hatred of all things American - Donald Trump.
For the first time since the administration of Ronal Reagan, America has a president who is not afraid to put America first and the Anti-Americans, both here and abroad, had thought they’d seen the end of that.
For the past 30 years, the left both here and abroad had seen steady gains under a series of feckless, weak - and with the election of Obama - downright anti-American presidents. They watched with glee as America retreated from the world stage and became a shambling, apologetic parody of the country that had saved the world from terror, oppression, and totalitarianism.
Obama reinforced that when he began his reign with a world-wide apology tour and ended it by going to ball games with communist dictators and shipping 150 billion dollars to the county that has never stopped chanting, “Death to America.” What a bargain.
At home, America had also receded into shame and self-loathing. Led again by Obama wagging his finger in the face of America and telling us we were racist, sexist, homophobic, ignorant redneck boobs who deserved neither the rights to make our own decisions or to even defend ourselves. It seemed as though we had hit rock bottom and hadn’t a snowballs chance of ever returning to the country which had once saved the world.
Then a funny thing happened. That group of Americans who had historically worked and fought for America decided that they’d had enough and rejected the Left’s shrill, strident Obama clone and elected Trump.
The worldwide Leftists and anti-Americans went crazy. They took to the streets, destroyed and burned property. They chanted, “Not my President!” and wore ridiculous hats. "How could this happen?” they screamed. Who were these ignorant red-necks from flyover country who drank beer at backyard barbecues and flew America flags in front of their homes?
Well, you can actually see "those people" - the ones Libs rail against - all across America. They’re easy to spot.
For example, this coming Memorial Day or 4th of July take a walk down any street and look at the homes and businesses that proudly fly American flags. Chances are the ones that do, voted for Trump.

Now take a look at the ones that don’t - chances are they did not.
So this Memorial Day as we remember and honor all those who have fought, sacrificed, and died to keep the American dream alive and the world's best refuge for freedom still free, let's think of them and forget the America haters.
As long as those of us who love American can keep electing leaders who want to keep America free and America great - it will be!
Happy Memorial Day!
Copyright ©2018
Read more by Ric Wasley
Tweet