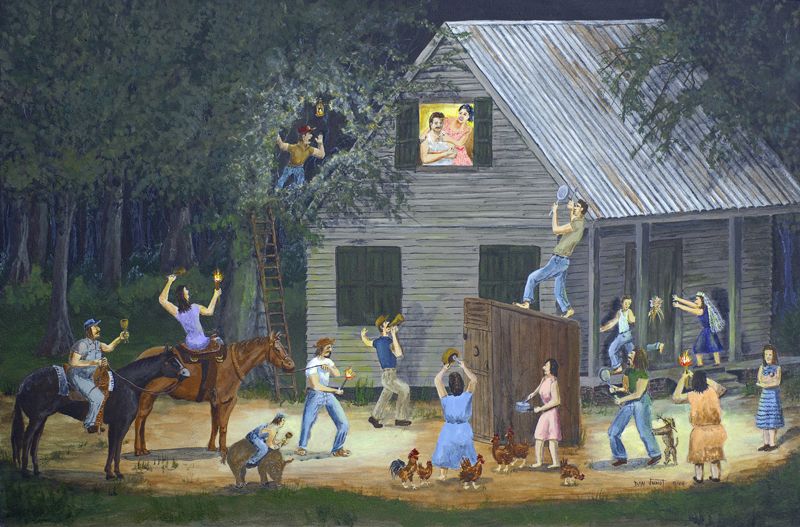 The royal wedding will be long remembered by everyone, but I don’t think the couple will be chivareed (shivareed). Few of my readers have any idea what that means but it is a fascinating practice that goes back at least 700 years in Europe and England and from America’s beginning!

The world is about to witness the royal wedding of Harry and Meghan at Windsor Castle officiated by the Archbishop of Canterbury, Justin Welby. The Rt. Rev. David Conner, Dean of Windsor, will conduct the service at St. George's Chapel. The Most Reverend Michael Curry will give the sermon. Curry is an American and the presiding bishop of the Episcopal Church, a U.S. branch of the Church of England.

Now that I have caused heartburn in many Americans and many others on the other side of the pond, I can focus on the issue at hand: weddings.

After the royal ceremony ends, the wedding party will leave Windsor Castle in a carriage pulled by Windsor Grey horses. The guests will attend a reception hosted by Queen Elizabeth II at St. George’s Hall ending the public’s part. The bride and groom will attend a smaller reception for about 200 friends and family at Frogmore House.

In earlier days, a chivaree would occur when the royal couple finally retire to their apartment for the evening.

I was about five years old living in a log cabin on a creek bank in West Virginia when I saw my one and only chivaree, called belling in West Virginia, Ohio, and other areas. I remember a large group of people, loud noises, yelling, boisterous singing, horn blowing, and pan pounding. It was my introduction to the honoring of a married couple by their family and friends following their wedding ceremony. Such was common in Appalachia and other parts of the south but it almost died out by the mid-1950s. Chivaree was a combination of trick-or-treating, fraternity hazing, and Christmas caroling.

When I was married in the 50s, my brother and good friends disabled my car, wrote all over it, tied cans to the bumper, and followed us through Huntington until I outran them to our honeymoon destination at the Log Cabin Motel in Gatlinburg, Kentucky a few miles away. That was a very mild version of a chivaree.

The chivaree usually was organized by a family member of the bride or groom who gathered a crowd soon after the wedding outside the couples’ home. Sometimes this took place a few days after the wedding. In America, it was always considered an honor and was common knowledge by everyone but was not discussed with the couple. The couple always had drinks and other treats available. During frontier days, booze was often expected. If the wedding took place on a wagon train, the men would rock the honeymoon wagon until it almost tipped over. Of course, the wedding couple had just settled down after their wedding.

One Kansas newspaper provides the following description of a chivaree: "They performed such tricks as shooting bullets through the windows, breaking down the door, dragging the couple out of bed and tumbling them about on the floor, and indulging in other equally innocent tricks." The editor added, "It requires backbone to get married out this way.” Few people still live in Kansas.

A chivaree in New Orleans was described: “The house is mobbed by thousands of the people of the town, vociferating and shouting with loud acclaim...Many are in disguises and masks; and all have some kind of discordant and noisy music, such as old kettles, and shovels, and tongs....All civil authority and rule seem laid aside.”

In Tampa, Florida in 1885, a huge chivaree was held in honor of local official, James T. Magbee’s wedding. It was “the wildest and noisiest of all the chivaree parties in Tampa's history,” and was attended by “several hundred” men and lasted “until near daylight.” The music produced during the chivaree was reportedly “hideous and unearthly beyond description.”

Usually, after newlyweds turned off the light, the crowd started beating on pans, yelling as loud as possible, setting off firecrackers, waving lanterns and flaming torches, shooting guns, playing screeching musical instruments, and chanting or singing until the sheepish couple appeared at the door. That was followed by the couple distributing drinks, candy, and cookies to the crowd. Depending on the couple and their celebrants, the couple was thrown into the river or into a horse watering tank to the shouting of “chivaree, chivaree!”

In some parts of the U.S., the bride was wheeled about in a wheelbarrow and the groom was tied to a greased pole and carried around town. Often cowbells were tied under their wedding bed. This unique wedding celebration was very mild when compared with its counterparts in Europe.

Chivaree (shivaree in some parts of America and Canada) is French for “rough music” and probably originated in France and as in America, it was to celebrate a newly married couple. However, the custom evolved into a kind of social coercion to force an unmarried couple to “tie the knot” and elevate the moral standards of the town. It was also used to show community disapproval of wife beaters, unmarried mothers, and of remarriage of older widows or widowers.

The custom spread to other parts of Europe.

The moral police in various European cities used the chivaree to send a clear message to an offending married couple. Many of the songs revealed the community’s disgust for adulterers. If a couple had remarried “too soon” after a death of a spouse, the noises represented the scream of the late husband or wife and his or her disapproval of the new marriage. Of course, the do-gooders never tried to prove the basis of their outrage.

If a marriage was not consummated (not sure how that was discovered) chivaree was used to punish the couple. In the 1500s, Martin Guerre in the village of Artigat, France married at the age of 14 and his wife did not get pregnant for eight years, so villagers ridiculed him, being sure that he could not meet the challenge of being a husband.

In 1683, a Quebec widow remarried only three weeks after the death of her husband and the people of the city “conducted a loud and strident” demonstration against the newlyweds at their home. Even though the couple was already married, the town was expressing their moral outrage.

The community do-gooders used humiliation to enforce their standards. If a couple refused to be contrite, they were ostracized and they often moved to another area. Sometimes a chivaree ended in murder or suicide. Shots were often fired and fighting was common.

In 1860, an English wife-beater was given a chivaree with the crowd chanting: “Has beat his wife! Has beat his wife! It is a very great shame and disgrace; To all who live in this place.” I’m not sure how he responded.

It is probable that the blowing of car horns and tying of cans to car bumpers along with disabling the couples’ car, and chasing the wedding couple through the city streets while pounding on their car doors and blowing horns are residuals of chivaree.

I’m all for moral standards, godly living, and strong marriages; however, it is not a mob’s responsibility to police and enforce their standards on others. Chivaree, as a good-natured way to honor newly married friends is one thing, but pushy busy-bodies acting as community police is another.

This practice might be considered a secular, twisted version of church discipline!

I’m glad chivaree is in the past. I don’t miss the “good old days.” I don’t think Harry and Meghan will miss them either.