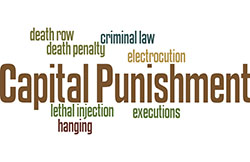 Enough is enough! It’s time for states to send a message to kids: if you kill, you will be executed by the state after a fair, fast, if not final trial! After the trial, permit him a state-financed appeal then on to the execution chamber. No killer should be alive more than a year after the crime.

It seems many “lost” teenage males are getting their fifteen minutes of fame by, for the most part, using legal weapons to kill fellow students. The shooters are usually losers, leftists, or loonies—usually saturated with potent mind-altering and personality-altering drugs. A study by the liberal Mother Jones magazine verified that about two-thirds of mass killings since 1980 were committed by the “mentally unstable.” If they are truly mentally ill then they belong in a secure medical facility.

My critics will point out that the Santa Fe shooter was not a leftist since he had a Nazi medal on his coat and that exactly supports my position. The Nazis were on the political left - Socialists - the National Socialist Workers’ Party as personified in Adolph Hitler.

Those young killers who don’t save the state a huge pile of money by using their weapon one more time should be led down the last mile to “old sparky” or to hanging or to some other death chamber!

Those with a soft head will be appalled at the suggestion; however, when America’s youth see one or two teens put to death, it will save numerous lives. Deterrence works.

Many leftists shriek that it is inhumane to execute teens, even vicious teen killers - and it would be state-approved killing! Those same people are adamant that a woman has a right to kill her innocent unborn baby, yet the state should not execute a killer after his defense has been heard in court! Moreover, if my critics argue that teens are too young to be killed, it negates their abortion argument. After all, the states kill millions of innocent unborn babies every year. I only want to execute a few much older teens for heinous killings.

Such executions would produce at least two results: the executed killer would never kill again, and his execution would send a signal to other teens.

Moreover, it is no valid argument that youth should be exempt from execution following a premeditated killing. Who decided that rule? Upon what basis is it founded?

We are told that we should forgive the killer, especially the young killer; but I remind them that no killer has asked for my forgiveness. Besides, he didn't take the life of one of my relatives so I don't have the right to forgive him.

During a talk show, forgiveness and mercy were mentioned as related to a mother who drowned her two little boys. I had just demanded a death sentence for her (after my friend Jerry Falwell asked for leniency), but the judge I was debating asked, "But what about mercy, Dr. Boys?" I replied, "Mercy you get from God; from the courts you expect justice." He should have known that.

The judge said, "But all the clergymen in her small town have asked for mercy in her behalf." I said, "Her two dead children would liked to have seen some mercy from her, but instead they were held under the water until the bubbles disappeared. Besides, preachers asking for mercy is not much of an argument, since most preachers pull on panty hose each morning and wear lace on their shorts." The host said, "What did you say?" I repeated it, and he said, "I thought that's what you said.”

The judge was silent.

Members of society should demand of our legislators that crime must not pay. That message must resonate to every city and country town that killers will not be pampered and made heroes in the media. Killers will be executed and after all, that can facilitate the best kind of rehabilitation. If a person knows he is going to die in 30 days, while the ACLU, PAW, NAACP and other radical groups whine, weep, and light candles for him, then maybe he will experience the ultimate in rehabilitation and turn to Christ for genuine salvation.

Sure, the death penalty is state-approved killing; and killing the killer, even a teen, will show compassion and responsibility by the state since it will eliminate further killings and deter others from doing so. It's called "tough love."

Passing laws has little effect on those determined to break those laws. If each state passed a law making all guns illegal, only good guys would obey. After all, it is obvious that the bad guys are not going to obey any law that would frustrate their plans. It seems superfluous to remind my readers that it is illegal in every state to use any kind of gun to murder someone.

People who love others will want a society where wrong is punished and right is promoted - in the Indiana House of Representatives, I even voted to bring back old Sparky!

When a few young people are executed, the “glory” of their killings will dissipate; and the medicated, angry, and bullied kid will go back to his video games for his satisfaction, not shoot his way to glory.

Carry out the death penalty on a few teens for the safety of thousands of others.