July 2, 2018
Tweet
This journal weighs an account of personal prejudice vs. actual racism, and the dogma radical leftists claim as intolerable along with their own seething cishet-white bigotry.

At 36-years-old, I came of age during a time when political incorrectness was the norm. Unapologetic white faces such as Archie Bunker, Al Bundy, and Tony Soprano dominated the entertainment scene. Each of these characters expressed mild to domineering epithets against people of color and homosexuals, views which steered integral facets of their everyday life, though these opinions generally met a countering “open-minded” rebuke to push a culturally-enlightening narrative.

And that was fine because the moral interplay was logical, realistic, and represented various ideologies.

Today, the very notion of non-white cishet prejudice is tantamount to cross burning and erstwhile lynchings for many pushing a “social justice” agenda. Except, it isn’t. No hate crime arose from pure prejudice, although racism is a different animal altogether.

However, all human beings, even if they fervently deny it, carry predisposed notions concerning racial, gender, and situational stereotypes.

As ugly as it may be, a prejudice is an inherently protective cognitive device. Our ancient predecessors’ survival and proliferation hinged upon their abilities to subconsciously prejudge and avoid dangerous scenarios.

Discrimination, as opposed to racism and sexism, in all its forms, for better or worse, IS human nature. 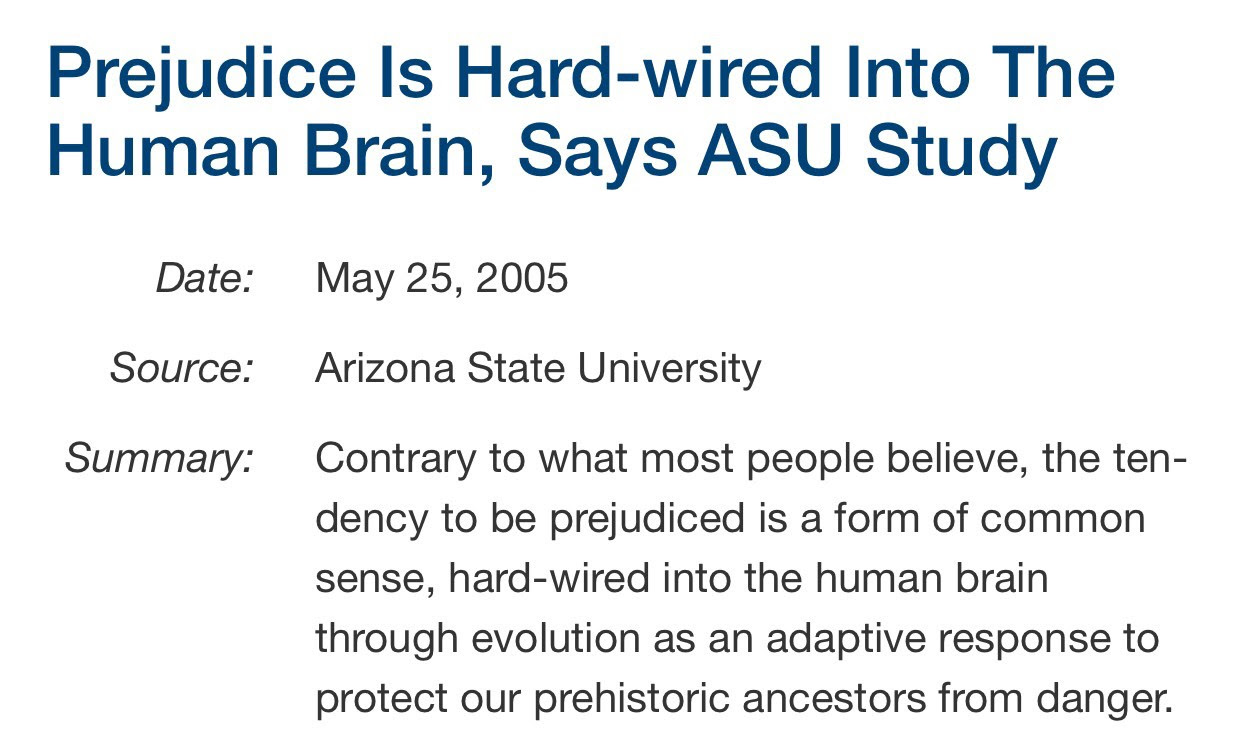 This is why I’m infinitely more comfortable strolling through an affluent neighborhood than one of low socioeconomic status. This is why my mind sends no warning signals to my body when passing a well-dressed, groomed individual as opposed to one wearing baggy, disheveled clothing, and unkempt hair.

I didn’t choose the aforementioned implicit psychology; it simply is. And I’m not ashamed of it because it keeps me and my loved ones safe.

Notice I didn’t use skin tone in my descriptives above because I’m less threatened, implicitly, by a well-dressed, even-keeled black, Latino, or Asian man than his disheveled white counterpart, and vice versa.

Unfortunately, though, this common sense explanation isn’t good enough for the PC police, who are hell-bent upon labeling all Caucasians as pigmentally “privileged” and thus the source of society's evils.

Does anyone else see the irony and danger in such misguided assertions?

Daily I learn of how another fiery pc lynchmob, usually virtual, has stamped a ransom note at society's feet demanding eradication of the patriarchy, heterosexual mores, Christianity, and all which do not fit their envisioned ideal societal mold.

Is this, by definition, not racism? How can those who cloak themselves in the garb of modern social justice denigrate and denounce one skin tone while striving to end systemic racism? Utter hypocrisy.

How can the media, which we all know is heavily left-slanted, claim true moral high ground while forcefully airing its biased social-utopia visions upon its airwaves? Anyone remember the hit show Last Man Standing, which mysteriously vanished? Yet, on television we are inundated by couples, faces, argot, and gender-incompetency which are highly unrepresentative of the nation’s overall demographic.

What the former entities have done, above all, and perhaps most destructively, is shove once left-centrists onto the right side of the political spectrum: thus ensuring Donald Trump’s improbable election and ripping a nation, which bonded so beautifully following 9/11, in half.

In this post-Obama toxic fallout, sanity and decency is lost. And no one is immune to its pernicious effects. "One Nation Under God" is something which sadly will never again be.

And while I cringe at images of racial violence, feel empathy for decent undocumented illegals, pray another Matthew Shepherd incident never occurs, and live quietly, nonetheless, my voice is slandered because it emanates through a white face?

That is unacceptable. This nation must find common-sense ideological footing before it implodes with fury from the fringes.