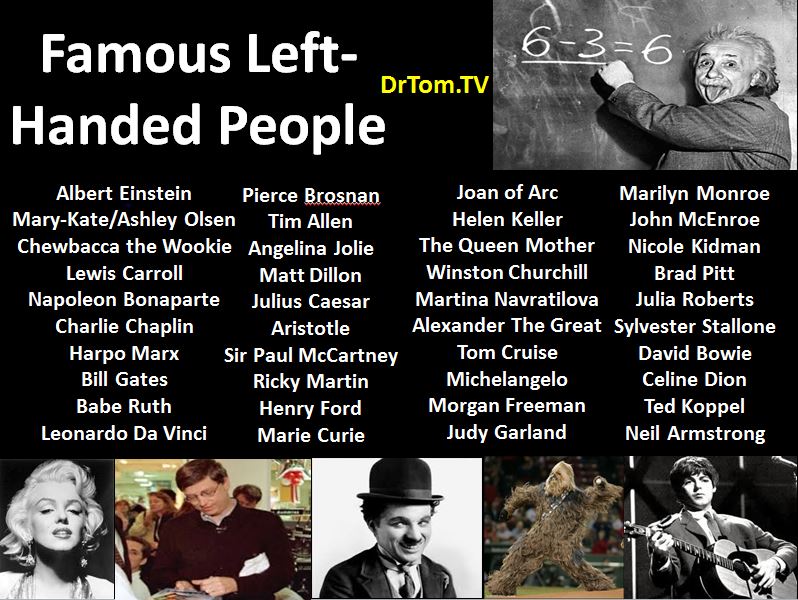 Today our great nation marks the annual observation of National Left-Hander's Day. Had you not heard? This is an epochal celebration and affirmation of all people who share dominance in their left limbs, marked each year on August 13! It is a day to coalesce around the gifts that this group of people gives to the world. Have you wished your favorite left-handed person a happy day?

As a demographic, left-handed people are often subject to discrimination and exclusion but they are proud to include among their ranks such high-minded and gifted cultural luminaries like Justin Bieber, whose contributions to history are simply without peer. Even President Obama shared the trait of being left-handed. This day is set aside to honor those who often go unheralded.

But I intend to put an end to this madness!  I find the celebratory designation of left-hand dominance discriminatory and exclusionary. I find it a micro-aggression. As a right-handed person, afflicted as such from birth, it seems, Left-Hander's Day shames me. Although born right-handed, I have identified as being left-handed for a long time. August 13 is a date that lives in infamy for me as it excludes me from something I have every right to enjoy.

Whoever declared that right-handed people are not left-handed? This discrimination cuts to the quick our American identity and infringes on the dignity we all share as human beings. The fact that right-handers like myself are not included as left-handers underscores a vast cultural phobia and deep-seeded dominance-ism.  I hope others will join me in this cause for equality. I know we will be on the 'right side of history' when conventional wisdom evolves to the point that people who are left-handed or right-handed will no longer have to be perceived as either.

The shackles of this stigma have chaffed innocent skin for far too long.  Kindly no longer refer to me as right-handed, or right-side dominant. As my movement commences, people like me must,  legislation forthcoming, be referred to as 'cis-dominant,' or 'dominance-fluid,' or even just plain 'trans-dominant.' Further, I will refuse any proposed accommodations for me, but rather only find complete inclusion and satisfaction when my right-handedness is recognized as left.

Obviously, this is insane. But increasingly in our day, and with shocking aggression, human reason is adulterated, confused, and distorted.  We manufacture suspect classes which are merely products of our ego. This navel-gazing has detached from reality the highest levels of our representative government. Obviously, a right-handed person is not a left-handed person, just as a person cannot simply use any restroom they choose. But reason, when indulgent and turned in on itself, causes not only heartache but, as evidenced historically, destruction and death. In this great cultural divide, it is a good reminder to make an appeal to wisdom, that sole virtue sought by Solomon. As the attacks and suspicions upon natural law and reason escalate, wisdom can guide us to calmer harbors of truth.

How can we do this? Well, for starters, Proverbs exhorts us to 'forsake foolishness that you may live.'  But an appeal to good, old-fashioned empiricism can also be helpful. I had a beloved professor who said, 'equality is not identity.' As one who always chose to be free over being equal, I have never forgotten her quip. Finally, my trusty, dog-eared tract of philosopher Josef Pieper is also illustrative. In his Abuse of Language - Abuse of Power, I think Pieper sums up our times best: 'For the general public is being reduced to a state where people not only are unable to find out about the truth but also become unable even to search for the truth because they are satisfied with the deception and trickery that have determined their convictions, satisfied with a fictitious reality created by design through the abuse of language' (Pieper, Abuse of Language - Abuse of Power p. 34-35. Ignatius Press San Francisco 1992).

Indeed, the attack on reason and reality has distorted and abused our very language. This abuse of language is ultimately an abuse of power in the most brutal of forms. From the meaning of marriage, sexuality, and even gender, a remedial reflection on the wisdom of reason must be employed. I find myself often invoking Galileo in our increasingly banal cultural debates. Legend has it that his empirical common sense made him utter, 'But still, it moves.' I say that often, perhaps a little more quietly now, because it gets laborious pointing out such reason to detractors who shout others down (often in the form of name-calling). In the end, the lack of quality and class in public discourse makes me sad. But the impact on our 'almost chosen nation,' is a national travesty.