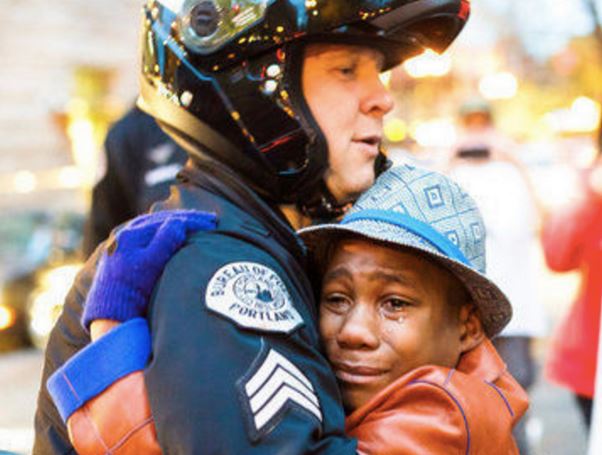 It is a strange anomaly that the people who most need the goodwill as well as the protection of the police are stridently, strangely, and stupidly doing their best to hinder, hurt, and harass those same people! And many black leaders have bought into the lie that the enemy of blacks is the cops who are looking for opportunities to shoot them down in the streets.  It is shocking to me that any honest person would support such dishonest demagoguery. It is dishonest, dangerous, and deleterious to support a preconceived opinion by trashing the truth.

Of course, too many people of all races are killed every day, but then too many people have rebelled against the laws that most sane people want to be enforced. The vast majority of the shootings of Blacks and Whites are justified because of those rebellious people coming in contact with those we pay to enforce our laws.

A New York Times editorial asked, “When will the killing stop?” - and the answer is when Black youth start obeying police officers. But then so many weren’t taught respect for authority in the home, mainly because of the absence of a male authority figure.

That’s not blaming the victim; it’s recognizing an unpleasant and unassailable truth.

It should be understood that it is not always necessary to shoot a suspect and when other means are available, lethal force should not be used. No doubt, many police departments need to do more training and be aware that they may have rogue cops among them. Also, it is a fact that police officers tend to be in areas known for criminal activity! So, if they are patrolling a black neighborhood because of so many robberies, then the cops will arrest more Blacks and have more potential clashes resulting in a tragic death of the cop or criminal.

Would the race-baiters such as Jesse Jackson and Al Sharpton want the cops not to patrol predominately black parts of town? Decent and concerned Blacks often say, “They are selling drugs on my street corner,” or “I can always smell marijuana in my building.” And everyone knows many streets in black and many white neighborhoods are not safe after dark. Now, since cops go where they are needed, is it any surprise that there are more confrontations in those areas?

Michelle Higgins is an Evangelical leader who has joined the race-baiting crowd. She is known as Marxist Michelle, a fanatical follower of and defender of the Black Lives Matter movement. Speaking at an InterVarsity Christian Fellowship sponsored meeting of 16,000 students, Higgins said, “If VonDerrit Myers (a black man shot and killed by a St. Louis police officer in October) was wearing an ankle bracelet at the time that he was killed, then he deserved to die.” She made the statement as if repeating what vicious, unconcerned Whites say about the incident as if that’s all the pertinent facts.

It is a fact that Myers shot first, and the officer at whom he fired returned fire and killed the teen. Lab results found Myers had gunpowder deposits on his hand at the time of his death. He was also awaiting trial on earlier gun charges and wearing an ankle bracelet as a condition of his bond in that case.

Continuing her racist diatribe, Higgins said, “The blood of Michael Brown cries out from the ground.” No, there is a cry for honesty, common sense, and courage coming from citizens of all races who want protection from thugs. Also, a plea for parents, especially black parents, to teach their sons to respect those people who daily defend their right to live and work. Youth must be taught to obey those in authority, whether parents, police, or principal.

She opined that because of her activism, she and her father were once “pursued and targeted for eight months by white supremacists who had been ‘dead set'” on killing them. It is interesting that no reporter asked her to elucidate. How were they “pursued” and “targeted?" If they were dead set on killing them, why did they not make any attempts? Yes, it is possible her statement is true, but it smells like a very dead fish.

Higgins charged that white Evangelicals are convinced that “African worship is weird.” Well, it is not only weird but pagan. I wonder if she has been to Africa and seen the paganism, shamanism, devil worship, etc. But I’m not supposed to write that, especially since I’m as white as a ping-pong ball.

She added, “God wants to relieve you of the burden of being in control." Well, I didn’t know Evangelical Christians were in control. But if whites are to be relieved of control, who is to take charge? After all, someone has to be in control.

She took a swipe at President Trump charging: "If you don't know your history, you're going to end up repeating it with a crazy-'a' president who don't know what he doing." I think a “Christian” spokesperson should have the grace and good sense not to call a national leader “crazy” without substantial medical support for the diagnosis. (Moreover, a college and seminary graduate should know about subject-verb agreement.)

She spent much time promoting BLM: “Black lives matter is not a mission of hate.” Well, that’s news to me. Their activities, slogans, signs, and chants indicate otherwise. She asserted that Blacks are “incarcerated and executed because of their skin color.” That is outrageous bilge and it is incredible that at least one informed, courageous student did not oppose her lies. But most students are non-thinking wimps.

Barbara Reynolds is a black author and pastor and former editor and columnist for USA Today. Fact is, Barbara and I wrote for that paper at the same time. I seldom agreed with her but we are on the same page today. Barbara wrote, “But at protests today, it is difficult to distinguish legitimate activists from the mob actors who burn and loot. The demonstrations are peppered with hate speech, profanity, and guys with sagging pants that show their underwear. The movement loses sympathy when it shouts down those who dare to utter ‘all lives matter.’”

Reynolds was right on target and she is to be respected for her candor.

During her speech at the InterVarsity gig, Higgins didn’t say anything about the Gospel but she did speak favorably of Communist Angela Davis! You remember Angie, don’t you? She was a professor who climbed into bed with the radical Black Panthers in the 1960s. She ran for U.S. vice president on the Communist Party ticket more than 30 years ago. And she once said, “The only path of liberation for black people is that which leads toward complete and radical overthrow of the capitalist class.” That sounds like insurrection and if so, it is illegal to advocate the overthrow of our government! She should be in prison but she escaped prison in the 1970s when an all-white guilt-ridden (in my opinion) jury left her free to do her work.

The sordid even took place on August 7, 1970, when teenager Jonathan Peter Jackson tried to gain the freedom for his brother George and another prisoner by kidnapping a Superior Court judge from the Civic Center in San Rafael, California. The botched attempt ended with a shootout that left four men dead, including both the younger Jackson and Judge Haley! Two others were wounded. The nation’s attention was captivated for months during the manhunt and trial. Davis had been a professor at UCLA and had been dumped, but got involved in this caper with the Jackson brothers and the Black Panthers. Davis was set free even though she owned the weapons used in the incident!

And such a radical Communist was praised by Higgins at a Christian event!

InterVarsity, feeling the heat if not seeing the light, issued a damage control statement saying, “InterVarsity does not endorse everything attributed to #BlackLivesMatter. For instance, we reject any call to attack or dehumanize police. But – using the language of Francis Schaeffer and Chuck Colson – we are co-belligerents with a movement with which we sometimes disagree because we believe it is important to affirm that God created our Black brothers and sisters.”

What a copout! No one questions that God created Blacks. God is not responsible for the disruption of black families, countless illegitimate children, and lack of respect for authority, especially by young, black males. InterVarsity has gone the way of hundreds of other parachurch groups—compromise, collusion, and corruption.

InterVarsity desperately tried to wrap themselves in the mantles of two popular Evangelical leaders, Francis Schaefer and Charles Colson. The religious group then reiterated their support for Black Lives Matter by calling them co-belligerents in the battle for doing God’s work. Can anyone imagine the Apostle Paul seeking to identify with the Gnostics in order to carry out God’s work on earth! After all, he could find something with which he agreed, if he looked long enough. We are not to give any support to unbiblical, unpatriotic, or unlawful groups. BLM qualifies on all three counts.

Leftist religious groups and individuals, consisting of the usual suspects, were surprised and delighted that InterVarsity had invited Higgins to speak. Biblically oriented people are horrified and many have struck InterVarsity from their list of those they financial support.

For sure, Jesus Christ was not preached, promoted, or presented, and some people still wonder why thinking Conservatives don’t support Black Lives Matter!

Higgins and other spewers of hate and misinformation need to understand that there is no government agency more dedicated to the proposition that black lives matter than the police!