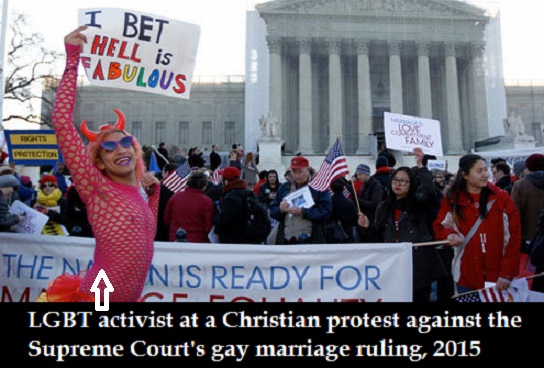 Slightly less than one hundred years after Jesus ascended to his Father, he gave a message to the seven churches which was recorded in the book of Revelation. Only one of the seven churches drew a commendation from Jesus. He was neutral on one church and scathing on the remaining five.
We can only wonder what Christ may say to today’s apostate churches, or to the once shining example of Christianity known as the United States of America.
In his rebuke to the church of Thyatira, Christ said they had charity, faith, and a record of service, (Rev 2: 19), but the one thing he would not tolerate was the false prophetess named Jezebel. She not only fornicated with members of the church, but she instructed or taught the church that it was perfectly okay to do so. Christ said she was cruising toward a very severe punishment which could cost her and her children - their lives.

He called her sinful practice, “the depths of Satan” (Rev 2: 24), and warned that those who had sunk to these depths were also in grave danger.
The Sins of Yesterday Would Blush
The kind of sin allowed today in the American churches would cause the sinners of Thyatira to blush. They are particularly heinous for two very distinct reasons.
First, is that America has had so much committed to her and so many blessings from God that there is not another nation in the world that can compare. It is this difference that illumines the seriousness of the following warning.
“But he that knew not, and did commit things worthy of stripes, shall be beaten with few stripes. For unto whomsoever much is given, of him shall be much required: and to whom men have committed much, of him they will ask the more.” (Lk 12: 48)
The second reason that our sins have far exceeded those of Thyatira is the purely perverted nature of both the doctrine and practice of today’s fallen churches. We have gone far beyond Jezebel’s fornication. We have churches that support gay marriage, sodomy, lesbianism, transgenderism, and child pederasty, and child porn.
Secular education boots the gospel - apostate churches and liberals say good riddance.
Success is still the hardest thing for both a church and an individual to endure. Often the successful author, pastor, or musician allow their own influence to determine what is true for others.
One example is the author of The Shack, William P. Young. While The Shack was never true to Biblical doctrine, it titillated millions who were satisfied to have their senses treated to a plastic modern theology of feelings, religious allusions, and a dab of new age. But it sold millions of copies and brought many to the theatres.
Now, author William Young is proclaiming that you can get salvation even after death. We wonder if, like Paul, he met with Jesus in the desert, or is it just the personal fame that made him an authority on what he knows not!
In the vast new realm of contemporary Christian music, one of its top icons has now decided unilaterally that we should finally ditch the Bible's creation account.
Faithwire.com reports that Hillsong United lead man, Joel Houston, has capitulated to the evolutionists.
Author Tré Goins-Phillips says, “Hillsong Church has, over the years, hardly avoided the limelight, often finding itself at the center of hotly-contested debates. Now, one of its biggest leaders is running headlong into the creation debate.
Joel Houston, eldest son of the Sydney-based church founders, lead musician in the worship band Hillsong United, and co-pastor of Hillsong Church in New York City, tweeted Monday that “evolution is undeniable.”
His success in worship music seems to have made him an authority on the matter of origins. In fact, he may be too involved with music to make time to visit the myriad of resources now available that bring down the evolutionary model like an old tree falling in the woods.
Sadly, because musical icons like Houston influence so many young people it is only those young lives who are being felled by the ax of compromise and apostasy.
The Perverted Generation
Sexual perversion alone is not what is plaguing the nation, but there is an endemic national plunge into everything off center; it is a new mindset that allows the unthinkable to become the new normal.
Examples fill the news daily:
Netflix now accused of streaming very disturbing children's content porn.
Demon-induced transgenderism just got cleared as not a mental disease (never was).
Drag queens not satisfied with TV, now looking for ‘drag tots.’
Liberals crying over children at the border, but not a single tear shed for 60 Million abortions.
Congresswoman charged with assault - making laws is not enough to keep her occupied.
Pope warns climate change can destroy the world, at the height of the greatest moral decline in history.
This is but a small cross-section of absurdities and perversions du jour, but they are so much a part of America’s landscape that normal seems to have been lost or remains flattened at the bottom of the heap.
The cowardly in the nation and the church, seem to have missed Christ’s admonition to count the cost of being a disciple. We talk of revivals, but we continue to decline and the church remains silent or jumps on the slide down into the pits.
This is the “depths of Satan” and it leads to God’s judgment; be it economic, military, or catastrophic, it is a nearing storm and cannot be averted without a serious change.
Related:
Perversion and Immorality vs. Trump’s MAGA – Who’s in the Lead?
Homosexuality, Transgenderism and Same-Sex Marriage: Are these Civil Rights?
Love, Not Hate, is the Reason We Resist LGBT Tyranny
Why are America and the Entire World Beckoning the Beast?
Michael Bresciani is the editor of American Prophet.org since 2005. The website features the articles and reports of Bresciani along with some of America’s best writers and journalists. Millions have read his timely reports and articles in online journals and print publications across the nation and the globe. Visit us at https://socialcross.org/amprophet also on Twitter and Facebook
Copyright ©2018
Read more by Rev. Michael Bresciani
Tweet