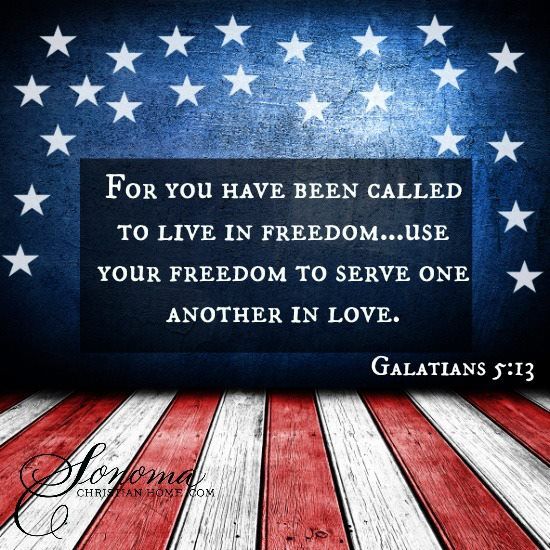 "Let us re-adopt the Declaration of Independence, and with it, the practices, and policy, which harmonize with it. Let north and south - let all Americans - let all lovers of liberty everywhere - join in the great and good work. If we do this, we shall not only have saved the Union; but we shall have so saved it, as to make, and to keep it, forever worthy of the saving. We shall have so saved it, that the succeeding millions of free happy people, the world over, shall rise up, and call us blessed, to the latest generations."  Abraham Lincoln, October 16, 1854 - Speech at Peoria.

I could not agree more with Lincoln's statement quoted above. At the same time, is there not a tendency for liberty to become license, and for those enjoying liberty to be like the Israelites under the Judges - each one going his own way?

So, in order to avoid the pitfall of mistaking license for liberty, this writer will try to remember to consistently link liberty with God’s grace. We're told in Scripture, he whom the Lord sets free is free indeed. Jesus quotes Isaiah saying that he, Messiah, has come to set the captives free.

Yet, clearly, there is a difference in meaning between the "liberty" that flowed out of the godless, anti-clerical French Revolution, and the liberty that was engendered and established by the U.S. Constitution. A counterfeit idea and ideal of freedom were introduced by the French. Their strong delusion was that freedom consists in what the philosopher Jean-Jacques Rousseau called “the General Will.”

In this mystical vision, the collective will of the people becomes the expression of freedom. Freedom is not seen as an ultimate, God-given ability of the individual will to choose between right and wrong, good and evil, God and a life of sin. Rather, according to Rousseau and his modern updated followers, one only experiences his freedom when his choices are ratified by and in accord with the General Will. It was a short step from the dogma of a new collective freedom – the General Will as perceived by Rousseau  -- to the dogmas of Georg Wilhelm, Friedrich Hegel, Karl Marx, John Dewey, and today’s morbid demagogues who are leaders of the Democrat Party.

Internationally, in our own time, the Islamist collective longing for a return to a caliphate (a unified Islam under a single leader, the caliph) was dubbed “Arab Spring” by those who carried a false, Rousseauian idea of freedom, an idea linking democracy (liberty) with surging, mystical collective desires for a new potentate to rule all of Islam.  “Free” to the fanatic Arab in the street meant “free to get a potentate.” Thus, their liberation, despite being portrayed as an exercise in freedom, is as far from true freedom as the West is from the East.

Look at another example from the Arab world. A few years ago, the people of Egypt were "free" to vote into office the hideous Muslim Brotherhood led by Mohamed Morsi - a coalition of genocidal murderers, Sharia fanatics, and militant jihadists, as well as the parent organization of Hamas. Also, a few years before the Egyptian travesty, the leaders of Hamas were freely elected by the people of Gaza (again, under a false concept of liberty which reduces liberty to voting). Despite electing these monsters, the Gazans are regularly portrayed by the liberal media as family oriented, normal, peace-loving people deserving of justice from the Israelis, especially for their shocking and destructive behavior of building apartment buildings for Israelis against the wishes of the Palestinian Authority and Hamas. Yet, Hamas is a terrorist organization with leaders who are murderous fiends. So, exercise of liberty can be destructive if not linked to morality and faith. Alexis de Tocqueville noted this when, in 1835, he wrote, “It is natural that they [partisans of liberty] should hasten to invoke the assistance of religion, for they must know that liberty cannot be established without morality, nor morality without faith.”

The political and social freedoms engendered by the U.S. revolution and enshrined in our Constitution together comprise a cultural freedom that is closer to God than the dubious freedoms claimed by many other countries.  Our freedom lines up more consistently with the realities, ideas, ideals, rules, and wisdom contained in the Holy Bible. These realities, ideas, and ideals are often referred to in a shorthand way as Judeo-Christian values. These values or “freedoms” (responsible freedom within a context of rights lawfully determined) represent the liberties Lincoln believed lovers of liberty sought to preserve.

In short, Lincoln was speaking to a population that largely was operating within a grace-filled, God-fearing context. Now, so-called lovers of liberty construe their “love of freedom” to be legitimizing bad language on prime-time TV, celebrating every form of immorality and vulgarity in film and on sitcoms, and tolerating the morally and spiritually intolerable as simply being “a choice.” Do threats and calls to harm the President of the U.S. line up with freedom? Is daily carping and denigration of the duly-elected Executive of the country really freedom of speech, or is it based on a complete misunderstanding of freedom? Are foul smears and malicious slurs compatible with freedom rightly understood?

Yes, we are still enjoying a certain type of freedom along with certain protections that enhance those freedoms; yet, it has been said "the price of freedom is eternal vigilance." Again, we should emphasize a vigilance that is Coram Deo, before the face of God. We need to be on our knees praying against the attacks on true Godly liberty. We need to put on the whole armor of God to struggle against the liberty destroyers.

Think about it: liberty destroyers alienated from the Word of God, yet acting in the name of liberty. Jesus Christ said that the “truth will set you free.”  Yet, liberty has morphed from being based in truth to being an end in itself. It is as if many of our citizens were thinking in a circular fashion: we are free to be free because we are…free. Faith in God and in His Providence is bound closely to a true understanding of freedom. We need to be on our knees in prayer day and night so we will go to sleep with the name of the Lord Jesus on our lips, and a heart overflowing with gratitude and hope. We need to ask ourselves and others: Is our freedom based upon truth, or upon malice, licentiousness, vile epithets, and contempt for your fellow man?