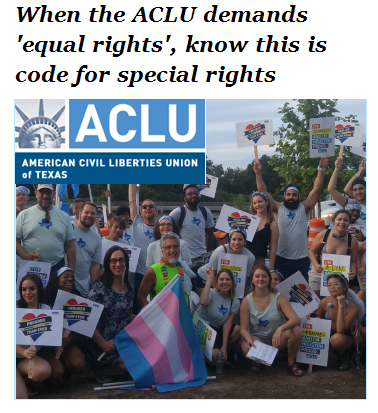 What has been the clarion cry of the left? Of course, it’s been one of disenfranchisement. They are the oppressed – the bullied – the back-of-the-bus riders.

For years we on the right have heard that various left-leaning groups just want to be treated as equals - but that Jim Crow conservatives (that’s all conservatives, by the way) are holding these factions down.

But that has never been good enough for the left, particularly today, as they become increasingly radicalized. The left doesn’t want equal rights. They do in fact demand special rights for every new subset of the left.

Women and “people of color” did receive the equal rights they deserved. Yet it didn’t stop there. It never does with the left. Women now receive guilt-ridden special rights by virtue of Title IX carve-outs. People of color received affirmative action carve-outs. Both are special rights, afforded to no other groups. Hardly the equal rights that their forefathers and mothers so reasonably demanded.

But this is what happens when the radical left highjacks an issue. In the name of “women’s rights,” came the pro-abortion movement, or legalized murder on demand. From the civil rights movement came the decidedly uncivil Black Lives Matter, who berate, almost to the point of violence, anyone who has the nerve to just claim that 'All Lives Matter.'

Next up - the homosexual rights movement. As each new group popped up, they became more radical, demanding more of society, and claiming that this is the new “civil rights” movement. We were to celebrate homosexuality as equal, regardless of our antiquated religious beliefs. Their rights, it was implied, trumped ours. Still do in most cases.

Now there is yet a new civil rights movement – that of the guys who think they are girls (and vice versa), or the transgender movement. And once again, we are being forced to celebrate the odd among us. Yeah, I said it!

As the movement becomes more radicalized, they make more and more demands. No longer is it enough for society to tolerate these movements. We are no longer allowed to live and let live. We must take part in the celebration, or suffer the consequences. And as long as we continue to acquiesce to demands, they’ll keep pushing the envelope.

Speaking of pushing the envelope - in Great Britain, not taking part in the nonsense of transgenderism is now a fireable offense. A Christian doctor, who worked for the U.K. National Health Service for 26 years, was recently fired for his refusal to use “proper” or preferred gender pronouns. That’s it!

The Blaze reported that British government overseers said, “that noncompliance with the policy toward transgender persons ‘could be considered to be harassment as defined by the 2010 Equality Act.’” Wow! Fired for not calling a dude in a dress ma’am, or something like that. And the left are the oh-so-tolerant ones.

Here in the States, Major League Baseball has become the target of the radical transgender brigade – or one team in particular.

It seems the New York Yankees, the Bronx Bombers, are the only MLB team left who has yet to celebrate the new “special” civil right of LGBTQ – EIEIO.

Every other team in the league has held an LGBTQ “Pride Night.” Funny – I don’t recall teams having a “people of color” or Hispanic Pride Night. I guess they’re no longer “special” enough. No – that’s not it. They’re just not odd enough to warrant a response from us evil conservatives.

New York City Council Speaker Corey Johnson said that, “Pride Nights are really important to show the LGBTQ community that they are just as welcome as anyone else,” CBS News reported. And why wouldn’t they be, assuming they don’t show up in outlandishly inappropriate costumes and publically display the debauchery often seen at their dopey “Pride” parades. Otherwise, few would give a hoot.

Which is why these groups act so outrageously – to purposely elicit a negative response. They can then cry foul, and accuse the repulsed of whatever phobia applies to their outrageous behavior.

But it seems common sense and reason has been flipped on its head. There is no live-and-let-live, and supposed oppressors have now become the oppressed.

So in the future, can conservative hetero whitey white males expect MLB to hold a “Pride Night” for us? Or will we just end up on display at the Museum of Science, alongside the other extinct species.