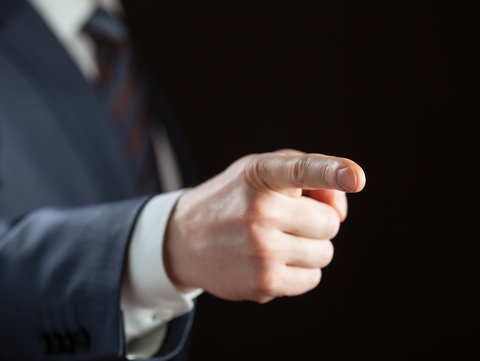 In a recent article in a local tabloid, a female columnist vented her frustration and disappointment at Judge Jeanine Pirro, whom she knows and likes, for her behavior on the View, and her confrontation with regular cast member Whoopie Goldberg. The writer’s contention was that the Judge committed an ultimate sin - she pointed her finger at Goldberg, and women do not point fingers at one another. Who knew? Is it okay to point fingers at men?

But what caused me some concern and trepidation was how this social construct that came as a big surprise to me has repercussions going back years, and there are certain things that you do not forget; some can leave an indelible imprint on one’s life. I can distinctly recall Mom with that digit extended, and saying something like, "you had better be careful Bobby, I’m still bigger and stronger than you and if necessary I’ll use all five digits to dispense punishment." Sometimes she did. And if that didn’t work, it was dad’s turn.

Then there was my third-grade teacher, Ms. Scanlon, in parochial school. "Robert," she would say (her finger was always well manicured with deep red nail polish), "if you don’t stop your nonsense and constant yapping, I will call your mother, that is after you feel the sting of the radiator brush." The brush was about 30 inches long, a quarter-inch thick, and it did sting. I was on the end of its purpose many times.

And then God and religion entered the picture. One day as I walked past the rectory of the parish church, Father Agostino descended the steps and stood and barred my way. He placed his one hand on my shoulder and with other, yes, he pointed the fickle finger of ‘faith’ in my face and berated me for an incident that had occurred during school with other students who insisted that I started it. Father said, something along the lines, "If you continue down this path, my son, when you arrived at the pearly gates St. Peter will greet you and will point the same finger, and then redirect it downward." Not good.

Then there were older brothers and sister who after the finger, put me in a headlock and gave me the deadly knuckle-head rub, but I digress. Had I known then what I now know, how that finger had much greater meaning than I would have ever conceived, I would have cried out in opposition, vented my anger and frustration, and spoke the words that the writer of the article employed, finger pointing was “disrespectful, demeaning, and flash-point enraging.” Yes, you read that right. But had I in fact mouthed off in this manner to my detractors, I would have been grounded, sent to the principal’s office, and faced eternal damnation.

Apparently, the vulgarity that Whoopie Goldberg spewed towards the Judge, shouting her off the set and confronting her backstage, and yelling get the F*** out of this building (while according to the judge she was sprayed by Goldberg’s spittle) - all this was merely two people, who disagreed. But that finger was the last straw, it was the ultimate offense and must be repudiated, censored, and the perpetrator dehumanized.

Friends, is this where we as a culture find ourselves? When insignificant gestures, interactions like pointing a finger are considered a gross offense, a cause for condemnation, and far more insulting and disrespectful than crass vulgarity, hate, and what in this case could be considered a personal attack - have we become nothing more than an insecure and weak people incapable of handling adversity with a cool, calm, and collected demeanor?

It has been some time since anyone has pointed a finger at me. There have been harsh words spoken on occasion, and there will always be disagreements among people. However, if somebody ever did use the digit, I would like to think that I would take it in stride and just brush it off as nothing more than someone who is upset and cranky. The thing is, though, I would be remiss if I failed to mention that the human hand does have five fingers; although I have rarely as of late been the victim of the subject of this article, I have on a number of occasions been the target of the one next to it, you know the big one that points up.