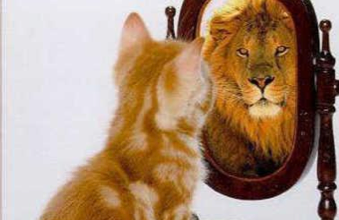 You might be asking yourself, what does Ed mean by IP address? It means Identity and Purpose. My friend Bernard Sanders from Bath, England told me that. Identity is who you are. Purpose is what you do. Confidence or lack of confidence determines how well you implement who you are and what you do.
Let’s talk about how we see ourselves and what the Bible says about self-image. Let’s start with a story.
Rod was meeting a friend at a singles bar, and as he went in, he noticed two pretty girls looking at him. “Nine,” he heard one whisper as he passed. Feeling pleased with himself, he swaggered over to his waiting buddy and told him a girl had just rated him a nine. “I don’t want to burst your bubble,” his friend replied, “but when you came in, they were speaking German.” Ouch! (I believe that would be a "No.") There’s an image check.
There is a story in the Bible telling us about the time the Israelites were on the edge of entering God’s Promised Land. Their C.E.O. Moses sent twelve spies into this land of promise to check out the situation. The spies walked around the land for forty days, then came back to give their feasibility study.
Ten of the spies reported to Moses what I call a, ‘Yes…but!’ It’s called approach-avoidance. “Yes, the land is fruitful, the harvest huge, it’s overflowing with cattle and bee farming opportunity...BUT, the land is filled with strong people, fortified cities, and even giants.” That sounds like lions and tigers and bears, oh my! Lesson: We don’t see things the way they are. We see things the way we are.
They summarized their predicament this way, “We became like grasshoppers in our own sight, and we were also in their sight.” Lesson: When you’re a grasshopper, everything is big. The problem is others will see us the way we see ourselves too. If we see ourselves as losers or victims, others will see us that way also. We will become a self-fulfilling prophecy to ourselves and others. Grasshopper vision has limited many people’s purpose, call, vision or destiny.
In these challenging times, we must see ourselves accurately and positively, or we will fall for those grasshopper reports. We need to know our IP address. What’s your IP address? It’s your Identity/Purpose address. We need to know our IP address or others will assign us theirs. Don’t be a victim of the ‘ups and downs and all-around’ of others' opinions. What others think of you is none of your business! The ten spys' assessment was, “we became like grasshoppers in our sight and theirs.” But don’t let fake news from either your insecurity or others' insecurity impede God’s best for you.
See yourself the way God sees you. God promised them their land. God obviously didn’t think of them as grasshoppers. God wanted to pull His people out of their past, then pull them up into their future. There are only three opinions that matter in your life. What God thinks of you. What you think of God after knowing what God thinks of you. And what you think of you after knowing what God thinks of you. If you can get the first question sorted out from reading the Bible, it will sort out the second question. If you can get the first two questions sorted out, it will sort out the last question.
You had a purpose before others had an opinion. Whoever or whatever is trying to bring you down destructively is already below you. When you find out how much you are worth, you will stop giving discounts. Know your worth, then add tax.
Ten of the spies never sorted out their IP address. All they could do was broadcast a bad report. Why? Fake news originates from fake views. But two of the spies, despite the obstacles, went on to their purpose because they knew their identity. Why didn’t they have grasshopper vision? They knew who they were because they knew Whose they were. Having the first two questions sorted out, allowed them to embrace what works, becoming big in God’s eyes and their eyes.
My how those grasshoppers grew.
Ed Delph   August 13, 2018    CCC
Copyright ©2018
Read more by Ed Delph
Tweet