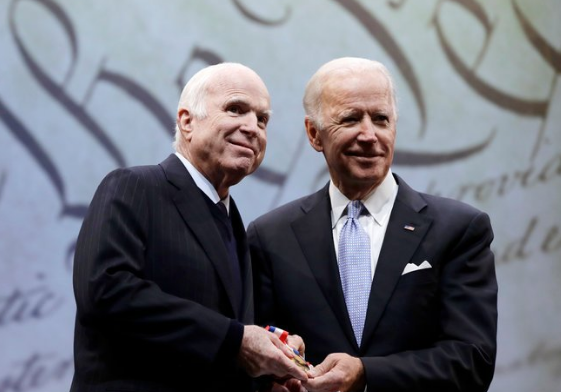 Fake news media's sudden overwhelming fondness for Republican Senator John McCain is insidiously evil and disgusting. Cold and calculatingly, the American Left exploits and spins every death and incident to further its mission to undermine Trump, the Constitution, and traditional American principles and values.

The same Democrat hacks and leftist media operatives who are highly praising the late John McCain called McCain a racist basically for being white, Republican, and running against Obama. As the GOP presidential nominee, McCain's absurd strategy was to get into the presidential boxing ring with Obama and not lay a glove on him. McCain even instructed his team not to use Obama's middle name, “Hussein.” Fake news media still mercilessly attacked McCain, even accusing him of “race-baiting.” (1)

These same leftist hypocrites are arrogantly attempting to dictate to Kelli Ward and President Trump how they should respond to Sen McCain's death.

I attended the final rally of Dr. Kelli Ward's bus tour in Yuma, Arizona. Dr. Ward offered a moment of silence and a prayer for John McCain and his family. I guarantee Dr. Ward's classy gesture will not be reported by fake news media.

As I stated, the American Left shamefully only sees John McCain's death as its latest bludgeon to beat up on conservatives, Republicans, and Trump.

I feel like I have been shouting this truth from the rooftops for years to no avail. The American Left, which includes fake news media, does not give a rat's derriere about anyone or anything other than furthering their anti-American and anti-Christian agendas. The life of every American – including yours and mine – is deemed acceptable collateral damage in their mission to transform America away from the divinely inspired vision of our founders.

This is why leftists did not care when Obamacare caused cancer patients to lose their life-saving doctors. All leftists cared about was government using Obamacare to take over one-sixth of our economy – controlling every aspect of our lives, dictating our behavior and deciding who lives or dies.

Folks, I cannot state this truth enough. The American Left are soulless vipers who deceptively portray themselves as championing victims. The reality is that leftists always view people as pawns – coldly using their pain, suffering, and lives to further their godless and anti-American agendas.

For example, the American Left used 17-year-old David Hogg as a human shield to hide its ultimate mission to disarm every law-abiding American. It is idiotic for leftists to believe disarming good guys will protect our kids from bad guys. After every school shooting, leftists reject common sense solutions like arming teachers and providing security officers to protect our kids. Clearly, leftists' true agenda is not about protecting our children. Leftists view tragic incidents of school shootings as ammo to demonize law-abiding gun owners and demand the repeal of our 2nd Amendment right to bear arms.

News flash – criminals do not obey laws and will always have guns. Still, leftists are obsessed with passing more gun laws, which are really baby steps towards disarming law-abiding gun owners. School shootings are used as weapons to bludgeon gun owners into submission – surrendering their guns. Leftists believe if they scream their irrational logic long and loud enough, they will one day successfully repeal our 2nd Amendment right to bear arms.

The American Left's over-the-top loving on John McCain is sheer hypocrisy, considering the way they treated him whenever he leaned towards Republicanism.

We have seen this movie played out numerous times, particularly since the election of President Trump. The American Left expresses outrage over something insignificant – in this case, Trump's response to the death of Sen McCain.

Fake news media go into 24/7 attack, lie, and smear mode, launching 24/7 panel discussions expressing outrage and how this incident is the magic bullet to take down Trump. The American Left's oh-how-we-love-John-McCain hoax will fail. Leftists will move on, eagerly awaiting the next death or tragic incident to exploit and scam We the People for their purposes. Despicable.