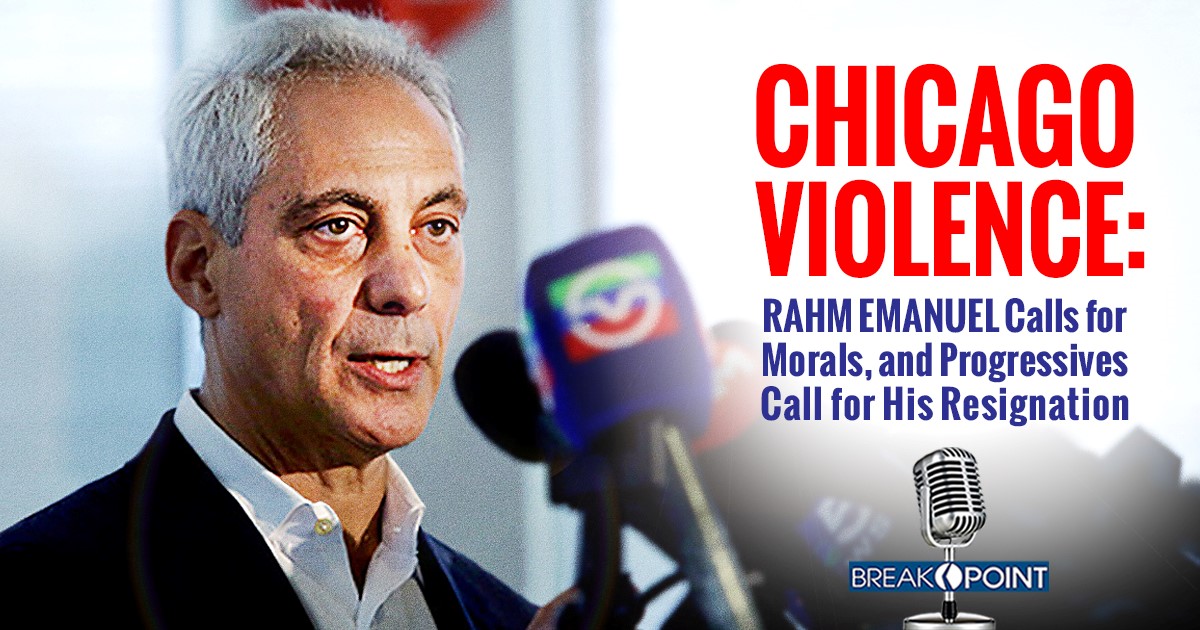 “This may not be politically correct, but I know the power of what faith and family can do...Our kids need that structure...I am asking...that we also don't shy away from a full discussion about the importance of family and faith helping to develop and nurture character, self-respect, a value system, and a moral compass that allows kids to know good from bad and right from wrong.

"If we're going to solve this...we've got to have a real discussion. Parts of the conversation cannot be off-limits because it's not politically comfortable...We are going to discuss issues that have been taboo in years past because they are part of the solution...We also have a responsibility to help nurture character…It plays a role. Our kids need that moral structure in their lives. And we cannot be scared to have this conversation.”


If not such a recent quote, we could play game of “Who Said It?” For those who follow the news, the answer is obvious: Chicago mayor Rahm Emanuel. By “this” he wants to solve the crime problem: the rampant, heinous thuggery – frequently gang violence – that dominates the streets in certain sections of Chicago which has come to typify everything that is wrong with modern liberalism.

For his efforts, Emanuel received criticism on multiple fronts – not just liberals who ushered in post-morality America. Emanuel was accused of “blaming the victims"; being “tone deaf"; and deflecting attention from his own administration’s policies. The real problem, we are told, in no certain order, is: the Illinois budget; the closing of mental hospitals; the closing of schools; racism; lack of “investment” in communities. Surely President Donald Trump was blamed by somebody, somewhere.

The mayor did not sign up for this. He raced out of the Obama White House to be the hero that Chicago deserved – not the hero it needed. He never intended to be anything but a place-holder for the city while the job of mayor served as a springboard for Emanuel’s next office. But something went askew on the journey to greatness. Perhaps he should have chosen Kankakee, just a few miles down the Interstate from Chicago. The city of less than 30,000 has had 47 murders – between 2002 and 2016. Okay, so most mayors of Kankakee don’t go on to become US Senators or Presidents or Caesars or whatever it is Emanuel wants to be, but he’s not getting there by way of Chicago, either.

The sad but amusing aspect of this story is that the mayor is correct: the root of the Chicago problem is morality. Unfortunately, that is so 1992 to say such a thing. Once a nation collapses morally, it’s too late to pull out the Morality Card and point out that the family has fallen apart, many parents fell prey to liberalism and failed to raise their children properly, and/or the kid went all wonky because of peer pressure, but a strong dose of faith and morality would indeed help. Can’t say that. Not today. Not anymore.

Hearing Mayor Emanuel preach faith and family is akin to the promiscuous Augustus Caesar demanding from his Roman citizens that they knock off the adultery. Maybe Emanuel is a fantastic father and loyal husband, but his previous boss and current political party have pushed policies that have had the opposite effect on our society. Marriage is now all but meaningless the way it is defined today. Once upon a time, our Welfare system was largely dismantled after the Republican Congress shamed President Bill Clinton into signing out of existence most of the programs; however, subsequent Republican and Democrat Congresses and presidents managed to slowly put it back together like a governmental Humpty Dumpty program. Now Welfare once again demands the dissolution of the family unit.

Abortion sets the example that Life carries little meaning. In our criminal justice system, intentionally take a life and you serve, oh, maybe 20 years, depending on the state, the judge, and the prosecutors. That’ll teach ya.

Yet, Emanuel is right. Dead right. Four-hundred to nine-hundred dead bodies a year right, depending on the year and death toll in the Windy City. Faith in God and a commitment to following Judeo-Christian principles, the adhesion of the family, and teaching right from wrong are the bedrock on which individuals, families, communities, and Western nations were built. Take away that bedrock and society is built on but quicksand. To refer back to the Romans, in the years leading up to the rise of Julius Caesar, the Republic teetered on collapse because of the breakdown of the Rule of Law. Positive, nurturing values were replaced by personal expediency. Fidelity became a thing of the past; political corruption became the norm, accepted; and soon enough, a reason for morality and ethics was forgotten. Hello, dictators.

Are we there yet? Not quite, but how can anyone doubt we are closing in on such troubling times when even a liberal who helped usher in the moral collapse, which already occurred – don’t fool yourself – cries out for the ways of the recent past and is ridiculed for it? Maybe Emanuel’s last resort of appeals to morality is all politics, or maybe he has seen the Light – in a political or spiritual sense. Either way, whether he truly meant his words or not, our sad society is in shambles – morally speaking – when a simple truth is spurned as an attack.

Will the mayor make it clear that, despite the criticism, he meant what he said? Or will we, in five years, have another entry in the game of “Who Said It”? Stay tuned. A cynic will tell you to bet on the latter.