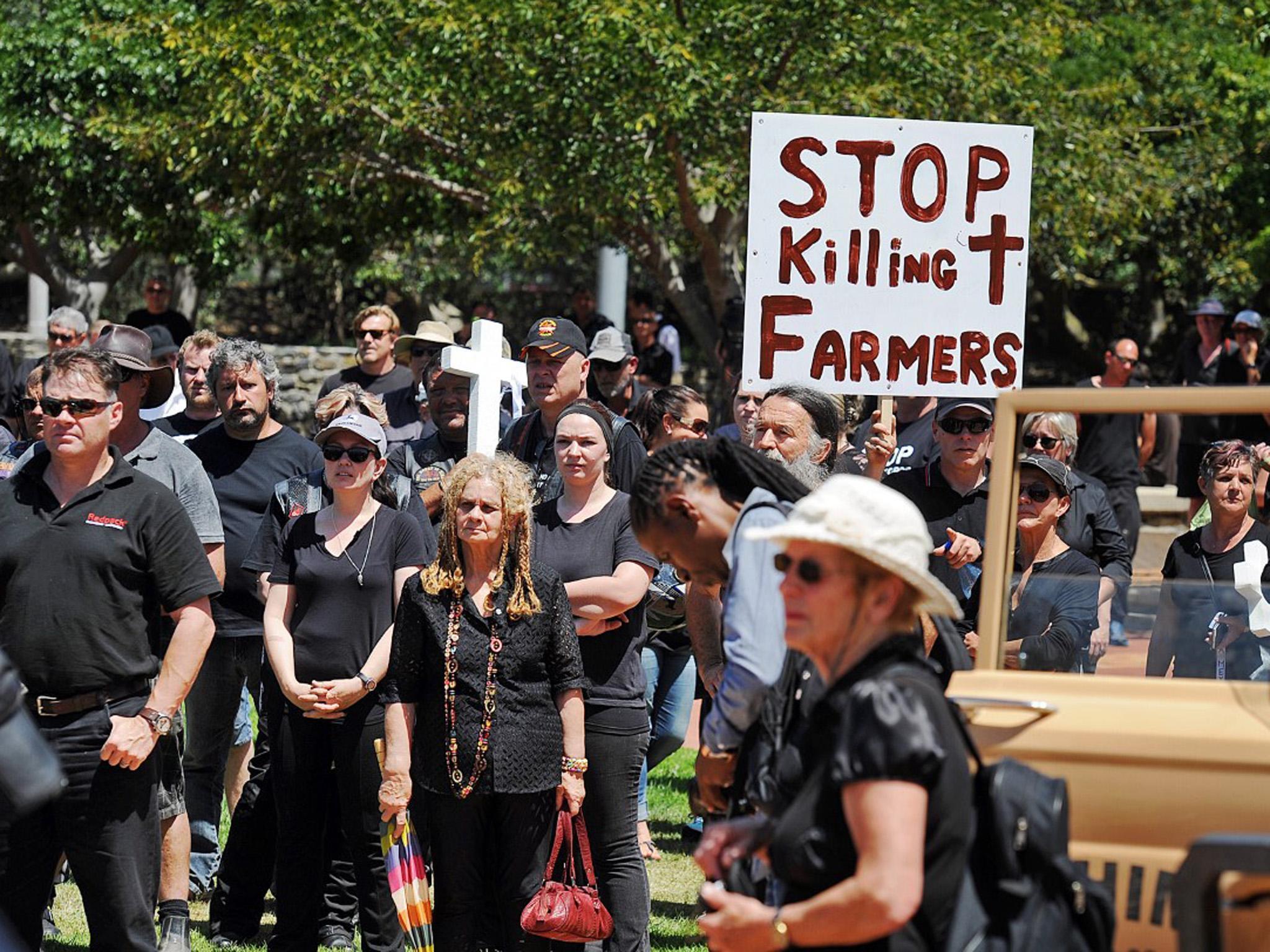 President Trump was not wrong about the South African land grab according to the South African Institute of Race Relations (SAIRR), a liberal think tank. These liberals said that the U.S. President had exposed the “damage” the policy was doing!

However, he did not expose the extent of the damage. Nor the intent.

The current President of South Africa wrote an article for London’s Financial Times defending the taking of land from white farmers without compensation: “This is no land grab; nor is it an assault on the private ownership of property. The ANC has been clear that its land reform programme should not undermine future investment in the economy or damage agricultural production and food security.”

It seems in this era of words not having any valid meaning that bad is good, war is peace, weakness is strength, and up is down. But thievery is still thievery even if done by the government.

The AgriSA agricultural union in Pretoria, South Africa released new figures that reveal black criminal gangs have killed one white South African farmer every five days so far this year! Is this “only” random crime taking place in a troubled land or a plan to drive all farmers off their land by intimidation? South African officials suggest that these killings are only “burglaries gone wrong” but informed and honest people (black and white) know the truth. The government stopped accounting for such deaths since it is too embarrassing. The “burglaries gone wrong” headlines result in less negative press than “another white farm family wiped out by roaming blacks.”

The head of Genocide Watch, Dr. Gregory Stanton in 2012 conducted a study in South Africa and came to an incredible conclusion: “There is a coordinated campaign of genocide being conducted against white farmers.” Many of the Whites surrendered their guns when the African National Congress (ANC) government passed gun laws to confiscate the farmers’ weapons. Genocide Watch said, “Disarmament of a targeted group is one of the surest early warning signs of future genocidal killings.”

The South African government currently estimates there are 31 murders per 100,000 people per year, which comes out to about 50 per day. Outside groups suggest that it is double that. No one knows for sure because the ANC banned crime statistics from being accumulated, analyzed, and admitted - because they scare off foreign investment and drive people out of the country. Does anyone blame people for their concern and fear?

The London Daily Mail, April 28, 2017, reported, “Unemployment is 90 percent in some townships, and riots –described as ‘service delivery protests’ by the ANC – are so widespread and frequent they barely get reported.” So, the numbers are as suspect as Bill Clinton’s vow of fidelity.

However, political leaders are determined to take the farms from white farmers and intimidate others into acquiescence to make up for perceived and real discrimination under white administrations.

The nation’s leading politicians are involved in this genocide of Whites as their words and actions clearly prove.

Julius Malema, far-left leader of the Economic Freedom Fighters (EFF) charged that all whites are criminals and the ANC Youth League was going to take all the white farmers’ land without compensation. The big problem here apart from the organized thievery: the Rural Development and Land Reform Minister told Parliament that more than half of the farms that were purchased for black farmers by the government had either failed or were failing!

When Zimbabwe did the same thing in 1999–2000, it was followed by massive famine and astronomical inflation where hamburgers at the capital city of Harare sold for fifteen million Zimbabwe dollars.

Free housing, free college tuition, single-payer healthcare, doubling the welfare state and the minimum wage is the dream and plan of the leftists in the EFF. The EFF is the third largest political party in South Africa led by Julius Malema who said at a rally, “Go After A White Man...We Are Cutting The Throat Of Whiteness!”

Malema declared, “Through land expropriation, we are forcing white people to share the land which was gained through a crime against the humanity of black and African people.” They are not sharing the land; it is being taken from them by force. The land was not acquired via a “crime.”

Malema said the time for “reconciliation is over.” News24 quoted him saying, “Now is the time for justice.” He told the Parliament, “We must ensure that we restore the dignity of our people without compensating the criminals who stole our land.” One cannot restore what never was, so restoring dignity will not happen. Watch the daily activities of their Parliament to know what I mean.

And of course, the white farmers did not steal anyone’s land. Much of it has been in the same families for generations and others are paying high interest while working literally from daylight to dark in order to make their payments.

Malema promised, “Only death will stop us, not Trump, not sanction, not all of them. We know the consequences that are coming.”

So do I. I’ve seen this movie before starring Robert Mugabe with a supporting cast of grasping, ghastly, gloomy Communists filmed on location in Zimbabwe just next door to South Africa.

Few informed people doubt that South Africa, like many African nations, is headed into total chaos; but are the murders a part of the strategy to totally eliminate the white farmers?

In an interview with TRT World News, Julius Malema said, “We have not called for the killing of white people. At least for now. I can’t guarantee the future.” When the reporter mentioned that some people might view these remarks as a call to genocide, Malema responded, “Crybabies. Crybabies,” but later warned white South Africans that “the masses are on board” for “an un-led revolution and anarchy.”

That dude should not be in Parliament but in prison.

A widely reprinted letter that originally appeared in the Business Day newspaper also highlighted the feelings of despair. “South Africa is in a serious moral crisis. We are a violent society disintegrating by the day. Ghastly murders are committed daily,” wrote Farouk Araie from Johannesburg. “We have become delusional. Forgetting that life is absolutely intrinsic and inviolable, our country is awash with demonic monsters in human garb, savages fit only for the wild, and satanic beasts ill-equipped for civil society."

“One child raped every three minutes, three children murdered each day,” Araie added. “We are sliding towards the edge of the abyss and our people are crying out for sanity to prevail.”

Approximately half a million rapes occur on an annual basis, of which only one in nine is reported. This amounts to 132.4 rapes per 100,000 people per year, far and away the highest total in the world. And for every 25 men brought to trial for rape, only one is convicted!

A study conducted by the Medical Research Council, for example, found that more than one in four South African men — 27.5 percent — admitted to having raped at least one woman or girl. Almost half of those said they had raped multiple victims. Another survey by the same organization later found that 37.4 percent of men admitted to perpetrating a rape with more than one in four women saying they had been raped.

The South African ANC government gave whooping cheers for Zimbabwe when they stole white farms and the world watched as Zimbabwe spiraled into anarchy, murder, and rape, destroying their economy. The dangerous policies in South Africa have resulted in Whites fleeing the country, chaos in the streets, debased currency, and job losses while manufacturing output has stumbled, the rand is in a freefall, and people have slowed their spending either because of unemployment or fear of the future.

When the South African economy grinds to a halt under the leadership of black Reds; when the treasury has been looted and funds safely stored in secret Swiss bank accounts; when crops rot in the fields and inoperable tractors stand rusted and idle; when the phones, johns, elevators, and trains refuse to work; when the banks, insurance companies, and mines have been nationalized; when whites have fled the nation or have been butchered in Mau-Mau type uprisings; and when the dream of black rule has turned into a nightmare; then will the busy-body globalists in Britain, Canada, and the U.S. be satisfied?

I think not – because their attention will be focused on some other “noble” cause. Globalists have almost choked on many an African bone, but they usually cough it up, spit it out, and grab another one.

Sanctimonious Liberals never learn and they have a compulsion to feel noble. Honest people have a compulsion for truth even though it stings at times and it’s a truth, a stinging truth, that the legally chosen government in South Africa is stealing white farms and has plans to decimate white families.

Their own words testify to that tragic truth. And truth does set one free.