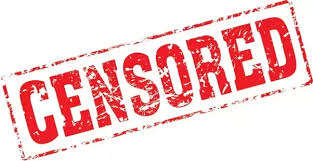 Voltaire said, “I disapprove of what you say, but I will defend to the death your right to say it.”

President Trump urged social media companies to “Let everybody participate, the good and the not so good.”

Mark Zuckerberg was asked in Congressional hearings if “Facebook subjectively manipulates algorithms to push their own agenda and censor conservatives.”  He replied “It’s not just to connect people…We have a responsibility not to just build tools, but to make sure those tools are used for good.”

Geeks at social media companies create algorithms deciding what is good. On political issues, we do not agree on what is good; we vote.

Facebook promises political neutrality and has guidelines of the unacceptable, such as violence, criminal behavior, etc., and objectionable content.

More than 80 PragerU videos have been restricted by Google/YouTube. Prager believes it was because of political viewpoint. Restricted videos included Harvard Law Professor Alan Dershowitz on the founding of Israel. Others include: “Why America Must Lead,” “The Ten Commandments: Do Not Murder,” “Why Did America Fight the Korean War.”

Prager filed a lawsuit to stop Google/YouTube from censoring PragerU videos. Google/YouTube claimed that censorship of certain PragerU videos was because they were inappropriate for younger audiences. The 9th DistrictCourt Judge Lucy Koh dismissed the case.  Prager then filed legal action against YouTube/Google for restricting several of its videos as age-inappropriate, despite containing no adult language or graphic material.
Diamond and Silk are a pro-Trump dynamic duo. They appear on Fox TV, do a ‘chit-chat tour’, and appeared before Congress about alleged censoring of conservative viewpoints.

A movie to be released in October follows the duo through Maxine Waters’ Los Angeles district to Washington D.C.; and more. Trying to put the movie teaser on Facebook, Diamond and Silk were censored and deemed “unsafe to the community.”

Robert Spencer is the director of Jihad Watch, a Shillman Fellow at the David Horowitz Freedom Center, and a Christian first-generation American. He is the author of eighteen books, including many New York Times bestsellers.

Under orders of then-Homeland Security Director John Brennan, Robert Spencer was dropped from federal training programs.  During Brennan’s time as Station Chief in Saudi Arabia, there are unconfirmed reports that John converted to Islam. He was sworn into office on the Constitution, not a Bible.

The Southern Poverty Law Center (SPLC) is no longer about helping southern poor. SPLC campaigns to silence those with whom they disagree. Facebook, Google, You Tube, and Twitter all accept SPLC’s verdict determining which organizations are hate groups.  They proclaim that Robert Spencer is a hate-group leader. He is not.  Facebook and Twitter have blocked thousands from reading many of Robert’s posts.

Facebook’s spokesman said they are open to regulation. Congress regulating what is censorship, or what is objectionable content, would increase government’s size and is not the best solution. Instead there should be an evaluation of gargantuan, too-big-to-compete-with, social media companies under anti-trust legislation.
Some state attorney generals are coordinating legal strategy with reference to anti-trust violations of Facebook and Alphabet/Google and complaints about conservative speech restrictions. Attorney General Jeff Sessions is starting to look into alleged abuses of large social media companies.

Enforcing anti-trust laws on social media giants would accord free market competition, without an overwhelming market share adversary. This could provide results that even Voltaire would love.