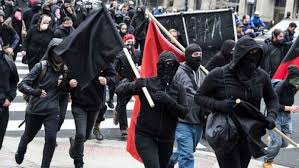 For decades we have allowed the American left (public education, Hollywood, Democrat party and fake news media) to indoctrinate our children; teaching them that America is evil and is the greatest source of pain and suffering for people both here and abroad. We're still allowing leftists to mold and shape our kids into their anti-Christian radical progressive image as early as preschool.

Consequently, we have young adults in positions of power and influence who literally hate their country. Like sleeper-cells, leftists' young enemies-within operatives are seeking to bring down America as founded by any means necessary; openly advocating violence and treason.

Mega-millionaire pro-football player, Colin Kaepernick is an operative of Leftists' young enemies-within movement. Nike executives who gifted Kaepernick hero-status for hating his country are also members of the young enemies-within movement. Facebook and Twitter are active members of the movement, boldly censoring conservative, patriotic and Christian speech, claiming such talk is hateful.

Upon suggesting that a millennial family member visit Mt Rushmore while visiting South Dakota, that person's venomous response was, “I wouldn't go across the street to visit those guys.” Clearly, public school taught my young white relative that the men carved in Mt Rushmore were evil racist white slave owners.

Watching the “Jeopardy” TV show, I learned that the new African American museum in Washington DC features a display of bricks with the names of slaves owned by Thomas Jefferson. The exhibit makes the point that Jefferson was a hypocrite for owning slaves and saying, “All men are created equal”. To ignore Jefferson's great achievements by dedicating an entire exhibit to the fact that he owned slaves (which was legal) is purposed to demonize this Founding Father and America in the minds of our youth.

Young corporate executives believe and pander to leftists' negative view of America. This is why we see corporate advertising supporting lies such as that America is destroying the planet and cops routinely murder blacks.

Leftists have instilled in our youths the lie that people around the world have too little because evil, greedy and selfish Americans have too much. This is why many youths believe it is only fair that we open our borders to whoever wishes to enter. And how dare we expect immigrants to assimilate, speak English, and embrace capitalism? Youths believe defending our borders against the invasion of illegals is racist and hateful. Our kids have also been taught the lie that Christians, Conservatives, and Republicans are haters obsessed with suppressing women and minorities.

Corporate executive operatives of the young enemies-within movement believe that a majority of Americans share the leftists' disdain for their country. This is why the NFL originally rallied behind Kaepernick leading the charge of pro-football players taking a knee in protest of our National Anthem.

The NFL protest is really highly paid privileged celebrities giving our military (active and veterans), our brave men and women in blue and America their middle fingers. It is stunning that NFL executives originally thought supporting such disrespect was a good idea.

The American left's demonizing of America in the minds of our youths has worked so well that openly socialist and even communist candidates are winning elections.  “Yutes” love former socialist presidential candidate Bernie Sanders.

Everywhere you turn, we are witnessing young enemies-within operatives' vitriolic no-holds-barred unprecedented attacks on our president, our nation's best interest, our traditional principles and values, our Constitutional rights, and national security.

It is mind-boggling that without any evidence, leftists have successfully falsely branded Trump the same as Hilter in the minds of many of my fellow blacks. In reality, Trump is the best president for blacks in decades. Black unemployment is at historic lows.

I am encouraged that some young blacks are on the national stage informing blacks about the American left's deceptions and betrayals.
https://bit.ly/2vqkWXlj

More Christians are finally becoming salt, pushing back against leftists' war on our culture. Christians blocked a California bill which would have made it illegal to counsel people unhappy with their same-sex attraction. The passing of the bill would have led to jailing pastors for their biblical sermons. Twenty years ago, the Religious Freedom Restoration Act received bipartisan support, signed into law by Bill Clinton. Today, Democrats are vehemently warring against our religious liberty, ruining peoples' lives and throwing them into jail for their faith.

Young enemies-within operatives are demanding the repeal of our 2nd Amendment right to bear arms.

One evening, I was at the Dancing Water Fountain at the Bellagio in Las Vegas. Around a thousand people were gathered watching the spectacular dancing waters accompanied by Whitney Houston's amazing rendition of our National Anthem. I was confident the crowd would erupt in enthusiastic applause and national pride at the end. Shockingly, the crowd remained relatively quiet, not particularly moved. I thought, dear Lord, what have they done to America in the minds of these young people? Public education teaches students that patriotism is racist, and that the concept of American-Exceptionalism is rude, arrogant and insensitive to the rest of the world.

Far too many young people believe opposing leftists' transformation of America in any way is hateful, racist and mean. No one wants to be thought of as hateful. As a result, many older Americans have surrendered to the leftists' attacks on our nation. They passively allow leftists to indoctrinate our kids to become young adult leftist sleeper-cell operatives.

Tragically, many youths now embrace leftists' version of utopia, in which government dictates behavior and controls every aspect of our lives - including who lives or dies. In the leftists' utopia, counter-culture behavior is celebrated, while traditional principles and values are frowned upon and deemed extreme. Disturbingly, many of our youth are infected with entitlement mindsets.

I am pleased to report that conservatives and Christians are fighting back, producing movies, TV series and other entertainment to break leftists' stronghold on the hearts and minds of our youths.  If the GOP loses the house in November, our progress will come to a screeching halt.
https://www.alienanthro.com
https://www.rwpvideo.org/

Let's keep the GOP in control of Congress to continue Trump's liberation of America.