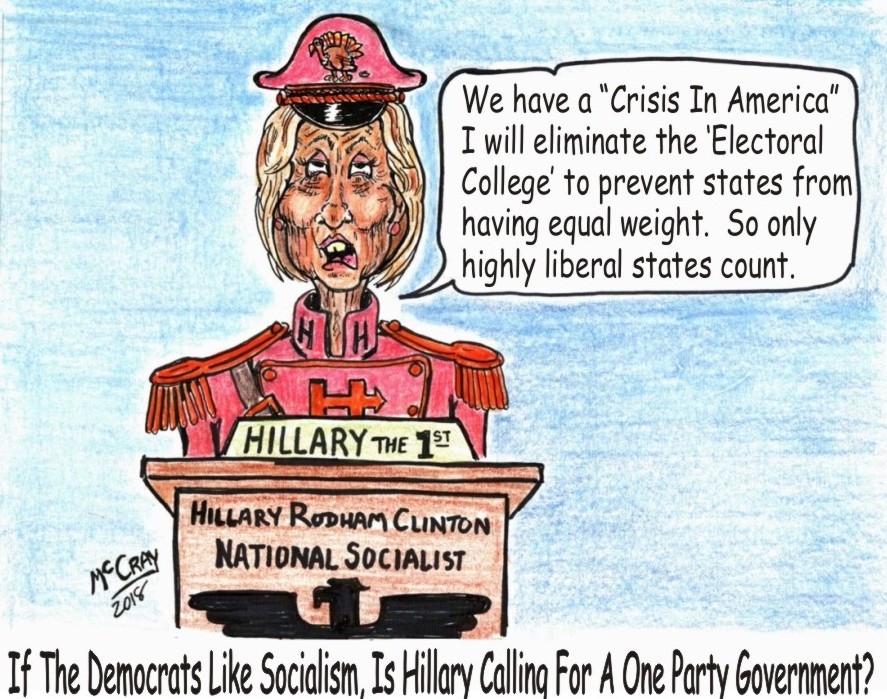 If hateful grudge-holding was an Olympic Event, Hillary Clinton would win all of the medals - it is highly unlikely she will ever get over her Presidential Election loss in 2016 to Donald Trump. She has blamed everyone on this planet, from Russian meddling to Trump and his Deplorable Voters.

Hillary has now changed her message, saying “America is in Crisis” since she won the popular vote, but lost in the Electoral College and she wants it removed from America’s system of government. The entire purpose for the existence of the Electoral College is to provide each state with equal weight in the National Elections for President. Eliminating the Electoral College will give all the voting power to a few of the most highly populated liberal states. Those in the northeast and California with large city populations, thus keeping states with smaller populations from having any effect on the national elections. This will require the Constitution to be re-written in order for Hillary to get her wish for power. To make those changes official, it will require 38 states to ratify the changes as an amendment to the Constitution, forever altering our treasured history of elections.

Is Hillary Clinton calling for a single party control of the government? If so, that moves from today’s Democrats that function more like a Democratic Socialist Party, which still competes for votes against other political parties, to that of a National Socialist Party, a single-party system which usually features harsh police tactics with a loss of your Constitutional Rights, which is the hallmark of a Fascist Police State. If this sick fantasy of Hillary Clinton comes true, then what are we suppose to call her, "The Dear Leader, Her Omnipotence, Her Ruthlessness, Her Caesarness, or Der Fuhrer."