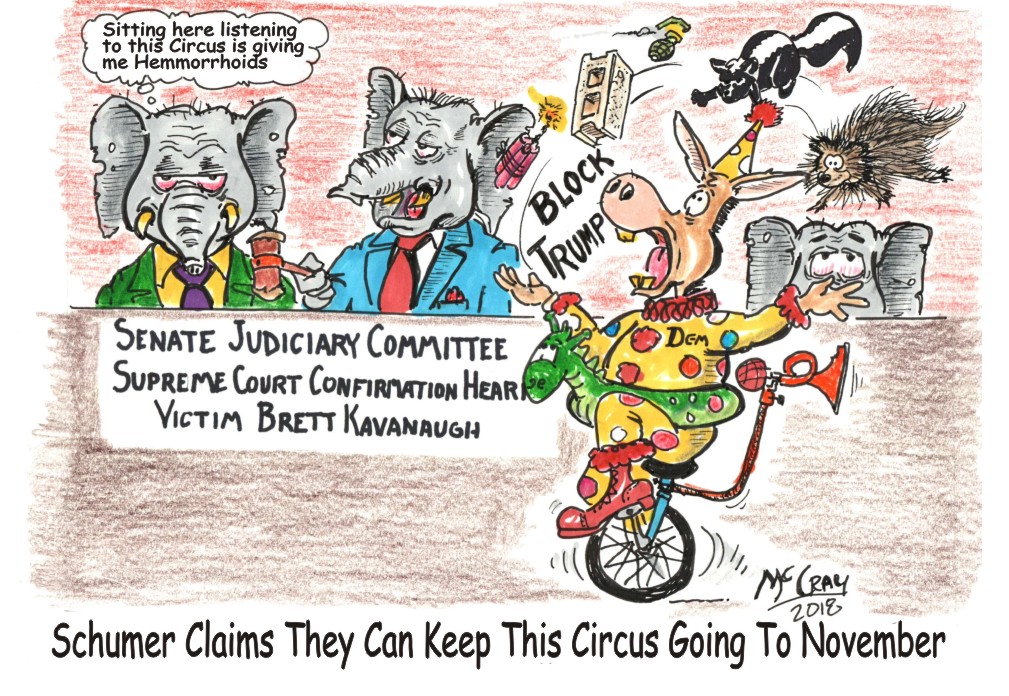 The United States and the World have been subjected to a level of unbelievable childish behavior during the Senate Confirmation Hearings of Brett Kavanaugh, the President’s choice for the Supreme Court.  Mature adults who are well-schooled in Law and Parliamentarian Rules of committee meetings, have presented one ugly, immature display after another by members of the committee and audience.  It has been bad behavior, poor sportsmanship, babies swinging dirty diapers above their heads, clowns to the left, clowns to the right, and control freaks losing their grip on power.  Now we have the Democrats parading accusers claiming Kavanaugh touched them in some way, some admitting they were drunk but they think it was him.

For decades the Democrats in the Congress have had things their way either by simple majority or by scaring spineless Republicans to cave in and vote for their Bills.  Now faced with a Republican party that has finally found its voice and maybe it’s spine, the Democrats are literally panicking at the thought of losing relevance and control they have enjoyed in Washington, D.C.

Faced with the prospect of a conservative Supreme Court with possibly two more conservative judges taking the places of Ginsberg and Beyer, have the left coming unglued.  The Democrats realize a conservative Supreme Court eliminates their legislating from the bench, bringing their Left-Wing Social Justice to a screeching halt.  The Democrats are frantic to protect the decades of Socialization of the country, and all of the little regulations and oddball laws that have been pushed through Social Justice Courts are now in jeopardy.

This explains the ferocity and hatred against President Trump, they have found that he can’t be bought or threatened, the Democrats have seen Trump undo miles of red tape and Mickey Mouse regulations designed grind the country into a Socialist State controlled by the Elitists of the Democrat Party.  You can expect more extreme and totally absurd stories to come from propagandists who claim to be journalists and violence in the streets as the left tries to force the White House and Republicans to cave in to their threats.