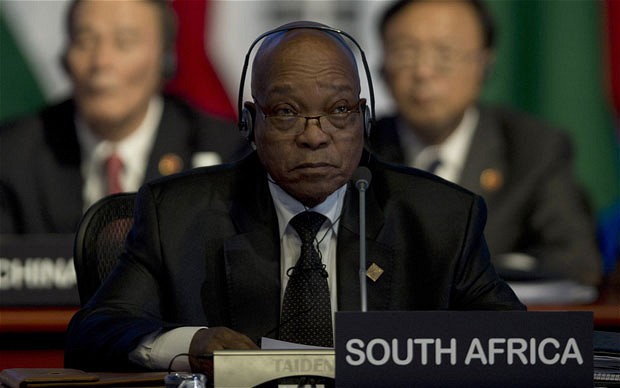 Dark, ominous clouds have hovered over South Africa for many years; those clouds have developed into a raging storm that may become a destructive cyclone.

The South African financial slowdown has now accelerated into a plunge into an official recession this month as second-quarter gross domestic product (GDP) figures showed a shrinkage of 0.7%, the second straight quarter of decline. This, after a decade of economic stagnation.

Such a slide into a financial nightmare will only accelerate into political rebellion and anarchy.

The main culprit causing the recession, according to South Africa’s Business Day, was a sharp contraction in the agricultural sector which has been under political assault this year as the ruling African National Congress (ANC) pledged expropriation of farmland “without compensation.” Consequently, the nation is “reeling” because of an unexpected recession following the government’s reported worse-than-expected GDP numbers.

South Africa’s long-term foreign currency credit rating is rated junk by S&P Global Ratings and their currency has been battered. Platinum prices are flagging near the lowest in a decade while diamond and gold production are now well below their peaks, although South Africa is number 5 of the world’s gold producers. It used to be ranked number one. Moreover, the most shocking number in the statistics is the “precipitous 29.2% decline in agricultural production over the second quarter.”

Could the Communist government’s taking land from white farmers and giving it to Blacks who often know nothing about farming, have something to do with the slowdown at least in agricultural production? A London Times journalist wrote, “Once-productive maize fields now grow only weeds. Citrus orchards are dying, their valuable fruit rotting on the branches. Machinery lies about rusting. Irrigation pipes have been looted and farm sheds are derelict and stripped of roofing.”

You think maybe that would have an impact on farm production rates?

Minister of Finance Nhlanhla Nene said growing the economy is “now critical” to expand the tax base. If tax collections stumble—a portent of bad times ahead—the government will have difficulty in borrowing money at reasonable interest rates. Tax collections have been down in recent years but does anyone question why? Since the government has not been receiving tax income they need in recent years, they did what most politicians do: they raised personal income taxes and increased the value-added tax (VAT)!

Over 6,000 white South African workers kicked off a go-slow protest that is now a full strike with the support of their Solidarity Union. The Whites who work for a petrochemicals firm are protesting against discrimination over a share scheme offered exclusively to Blacks. The ANC whined that the white workers are obsessed “with perpetuating racial polarization.” Sure, they demand they be treated equally since that’s what the liberation was all about under Mandela.

But there are more reasons for the poor economy than lack of tax income and strikes.

Remember South Africa has a Communist-run government. The Communist-controlled ANC has been in power starting with President Mandela’s election. He promised them, “Under a Communist Party government, South Africa will become a land of milk and honey. Political, economic, and social rights will cease to be enjoyed by whites only. They will be shared equally by whites and non-whites. There will be enough land and houses for all. There will be no unemployment, starvation, and disease. Workers will earn decent wages; transport will be cheap and education free.”

That did not happen, as everyone in South Africa knows. Poor people do get some freebies and that’s one reason for the spiraling economy. Poor people and some wealthy people receive a minimum of free water and electricity but at the end of the day, someone has to pay the bills. There has been some success in providing housing for the poor but 2.3 million poor blacks are still standing in line waiting for a free home and a set of house keys.

This, after 24 years of waiting for the Gravy Train to stop at their station, but that train is already loaded with Members of Parliament and their cronies and officials at the province level and their cronies.

Planned and unplanned blackouts are common with hundreds of people stranded on electric trains and hundreds more standing on train platforms. Such a consequence, happening often, would impact the production rates in all sectors of the economy.

Leon Louw head of the Free Market Foundation, a major South African think tank said, “This is a simple manifestation of the breakdown of the state,” he said. “Government is just appallingly bad at everything it does: education, healthcare, infrastructure, security, everything that is a government function is in shambles.”

There are quota laws mandating that all government townships, cities, utilities, transportation companies, schools, civil service, police, and businesses hire non-whites first and keep white percentage to 10%. It’s called Black Economic Empowerment (BEE) that mandates businesses to adhere to quotas on black ownership, employment, and acquisition. The motive was to increase job opportunities for blacks at middle and managerial levels within the public and private sector of the economy. Small businesses are not mandated since many would be run by families.

ANC parliamentarian Mario Rantho declared it “imperative to get rid of merit as the overriding principle in the appointment of public servants.” That was to “get rid of merit!” As a result, municipal budgets in the billions are now often under the control of largely uneducated blacks. The black editor of the Sunday Times has admitted, “My African colleagues who manage large companies or government departments tell me that to get a job done, you usually have to employ a white.”

Sounds racist to me, but that can’t be since he’s a rather famous black newspaperman.

But there are other ramifications of the BEE because many white-owned companies go to corrupt black ANC officials who do a lucrative business renting themselves out as front men to white companies seeking government contracts. The law applies to formerly all-white companies that must have blacks in their top management even though the black manager may not even know what the business does! About 91 percent of publically traded companies are still owned by whites and this requires a large number of black front men.

Private companies must apply the codes if they want to do business with any government entity.

According to international banking and affairs analyst Dennis Santiago “reverse apartheid” is a “strategic mistake for the country…This is a ticking time bomb.”

The government has a land reform process in which it uses tax revenue to purchase land owned by white people to give to blacks. However, it is not happening fast enough and blacks are getting restless.

Even South Africa’s one-time world-class mining industry is declining. It was the world’s biggest gold producer but since Communists got control, it is now fifth on the list and tumbling. Does one have to be a rocket scientist to understand that international investors don’t want to develop mines in a nation where the political party Black First Land First motto is “Land or Death!”

Nor are foreign investors encouraged to write a check when Lindsay Maasdorp, the Black Land First spokesperson, yells that all white people in South Africa “are criminals by virtue of their existence.” He also repeated his party’s slogan, “land or death,” as reported in The Citizen on September 17, 2018.

International investors are smart enough to know that a blood-bath is in the future of South Africans, so they wisely invest elsewhere.

Nedbank provides a wide range of wholesale and retail banking services and asset management services in southern Africa, and according to The South African, farmers have been warned that their debts will have to be paid in full even after their property is confiscated by the government!

Of course, South Africa is headed for financial turbulence because the pendulum has swung to the opposite extreme. Deep in the human heart of all people is the desire to be treated equal. President H. W. George Bush, applying pressure for all globalists during the hated apartheid days, told President de Klerk that black South Africans should enjoy not merely “equal opportunity” but “equality of outcomes.” Marx, Lenin, and Stalin could not have said it better.

Well, the Blacks are in control and they are purposefully working to produce a system of reverse apartheid.

But, like the white apartheid, it is discrimination—even hate—with pigmentation.