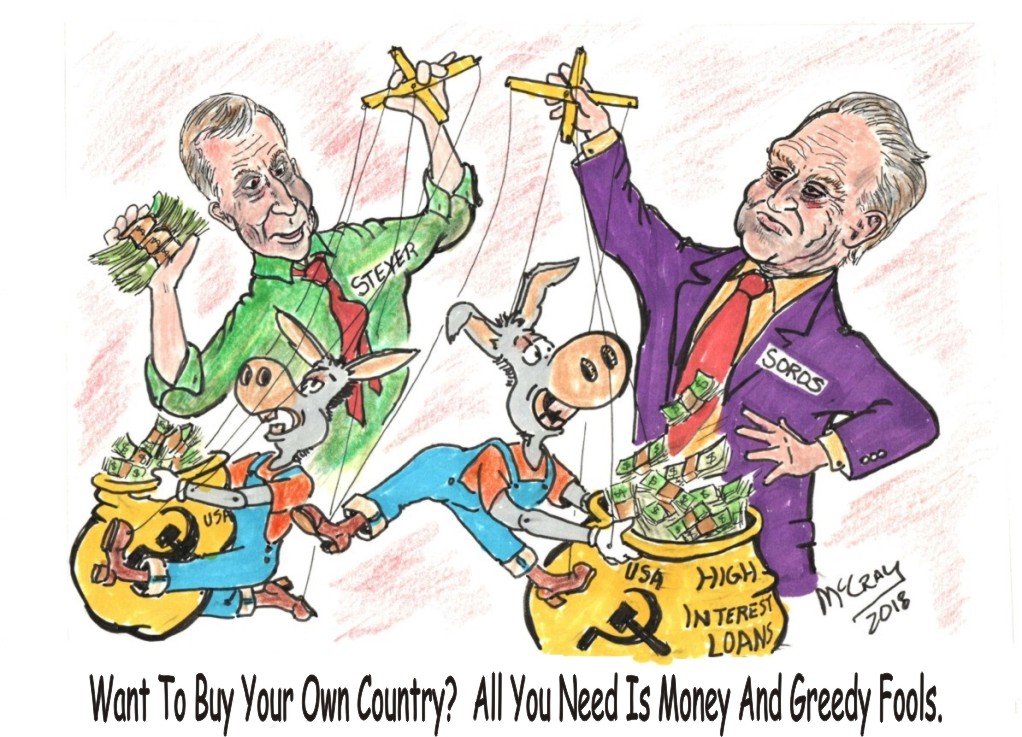 The cost for a political candidate to run for a public office is high, when you get to the national level it is completely off the rails. The cost for the combined Congressional and Presidential races of 2016 ring in at an estimated (www.cbsnews.com) $6.8 Billion, so who’s paying for these political seats. The individual donations to the campaigns is a drop in the bucket, the money really starts to roll in with the corporate donations and the Political Action Committees (PAC’s) where anything goes. Multi-national corporations have the ability to slide money in or out from any angle and you have no idea where the money is coming from; it can be rich manipulative individuals or from bad actors such as China, Iran, and Russia, as well as various Drug Cartels who want their guy in the driver's seat. The so-called donations are nothing more than high-interest loans that will have to be paid back and that can take many forms, from cash, government contracts, restrictions, and regulations lifted, or political decisions made by those in Congress and Presidency.

This kind of money politics isn’t new, but when the extremist left-wing Fat Cat Billionaires get involved, look out, it’s anything goes, and they seem to believe since they are so rich, then they can tell you how to live. These politically self-serving, self-righteous, who like to play god with a messianic opinion of themselves are the most dangerous. International financier George Soros has set his sights on the United States and other western economies for several decades. He has supported extreme left-wing groups and politicians by funneling money from over a hundred different companies that he owns in order to get around campaign laws. Soros, by his own admission, likes to wreak havoc on the financial stabilities of other countries for fun and manipulating situations to cause as much chaos as possible.

Soros admitted on a 60 Minutes 1979 Interview with Steve Croft, that during World War 2 he worked with the NAZIs in Hungary and was involved in the confiscation of Jewish Property, and he considered that time of German occupation as the “Happiest Time of His Life.”  Soros is himself of Jewish heritage, he betrayed his own people and his own country, Hungary.  This is a twisted individual who is on a power trip who gets his kicks out of ruining other people’s lives for what he considers as his entertainment and pushing his left wing ideas.

Billionaire Tom Steyer is 30 years younger than Soros but is on the same wavelength and just as dangerous, the founder of NextGen America and Need To Impeach. This San Francisco Progressive left wing extremist has spent $100 Million since 2016 and plans to put another $30 Million into the Mid-Term Left Wing political campaigns. He has put $20 Million in his group Need To Impeach Campaign to Impeach Trump for “doing awful things;” Steyer evidentially takes exception to Trump’s economic and foreign policy successes.

Soros and Steyer can’t tolerate the average American enjoying a better life, or the possibility that someone can rise to the heights of their own ability. These two totalitarian control freaks are trying to buy themselves a country where they can run it as their Socialist Kingdom. They will back any left-wing cause that creates chaos and disrupts the American way of life, anything that will cause upheaval. You can guarantee that these donations are really investments that they expect a return from, the purchase of a political party, the politicians, and anyone else that will push their agenda forward, and destroy the United States of America.