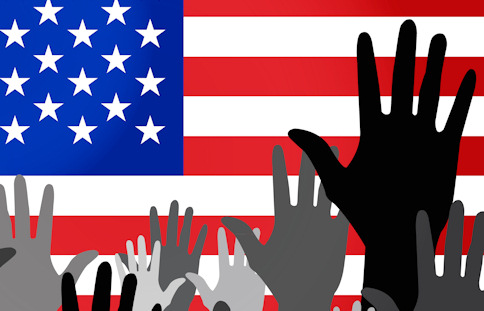 The former head of the Southern Baptist Convention and prolific gospel-preaching pastor, Adrian Rogers had a simple but profound viewpoint on the importance of the Christian to get out and vote.
“Let every soul be subject unto the higher powers. For there is no power but of God: the powers that be are ordained of God.” (Ro 13: 1)
Rogers said that Christians are the first to declare that in accordance with scripture all government is ordained of God. Yet, Rogers said they are also the first to abandon their heritage and privilege to take part in government by ignoring their right to vote.
Christian often take a fatalistic approach to politics with an almost Calvinistic idea that if evil prevails it was all supposed to happen anyway. The battle against evil for many Christians stops short at the voting booth, but there is not one iota of scriptural support for this kind of negligence.
Some estimates say that over eighty percent of evangelical voters helped to put Donald Trump into office. But now, in addition to the Christian non-voters, another problem arises for the mid-term election. For many voters getting Trump elected is a summary victory for all time and the mid-term races are not so important. Nothing could be further from the truth.
The deep polarization that has occurred in the last few years has created a dangerous dichotomy in the political class of Americans. Clearly, all that tends toward evil, homosexuality, transgenderism, killing the unborn, and a general licentiousness is found and promoted in the Democratic camp, while most things considered right, traditional, or moral and Godly are with some exceptions found in the Republican camp.
If all it takes is a simple vote to put down evil why are we not taking it more seriously?
How much effort does it take to rise up and get down to a voting center and cast a ballot against evil? How can Christians answer for neglecting this privilege after seeing the following New Testament passage?
“For consider him that endured such contradiction of sinners against himself, lest ye be wearied and faint in your minds. Ye have not yet resisted unto blood, striving against sin.” (Heb 12: 3-4)
No one ever came out of the voting booth bleeding and dying of wounds, but we will all suffer if evil men are placed in high office and allowed to endanger us all with legislation or the lack of it that furthers an evil agenda.
The 2018 mid-term elections are now far more important than in previous years because of the recent appointment of Supreme Court Justice Brett Kavanaugh. Now, the under the leadership of Nancy Pelosi and Chuck Schumer the Democrats, in their anger, may rally in response.
Even Christians who take a nonchalant attitude about voting should be warned that Christ made it clear that if we were faithful over the least things we are counted as faithful over very much. (Lk 16: 10)
Christ said we should give to Caesar (civil government) the things that are Caesar’s. (Mt 22: 21)
At the least, voting is what we should do to fulfill this admonition.
Let’s vote!
Copyright ©2018
Read more by Rev. Michael Bresciani
Tweet