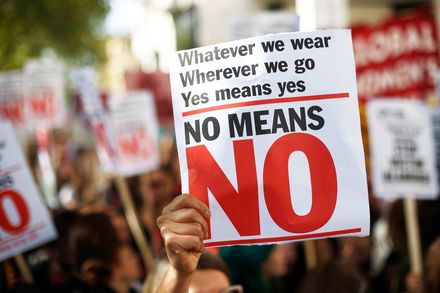 Wow, the screaming feminists came out of the woodwork, out from under rocks, and out of their ivory towers to vent their spleen about my column, “Brett Kavanaugh—“It’s Ain’t Necessarily so!” I’ve been called many vile things via email, phone calls, and on social media simply for an opinion that rape is rape only if there is resistance.

In my column, I took the position that a false accusation can destroy a man’s family, friends, finances, and future. All sexual assaults should be seriously looked at and any rapist should be executed as they were in bygone years in America and most nations of the world.

As a member of the Indiana House of Representatives, I introduced a bill that would put rapists in prison for life with no possibility of parole. I antagonized my friend the governor when I removed his authority to pardon future rapists. A reporter asked me why I introduced a bill that required life in prison for rape and I replied, “Because I know I can’t get the death penalty.” I did not win her vote as “favorite legislator of the year.”

With that background, I can hardly be accused of hating women or being soft on rape.

Most of the screamers took umbrage with my statement that rape “is having sex with a woman while she screams for help. No scream, no rape according to Deuteronomy 22:23-24. Did she bite his hand? Poke him in the eye? Women know instinctively how to protect their honor: screaming, shouting, slapping, spitting, slugging, and stabbing with a finger, pencil, or hat pin. Since she did not cry out or stab him, I will not believe her without a film of the event.”

A man called me and started screaming, “I’m a Ph.D. and have read the same books as you. The Bible passage you quoted requires death for both persons. What if she was too scared to scream? Have you ever been raped? Maybe she was unable to fight? Maybe she was a mute.” He went on and on, but he refused to consider that no one should be found guilty without corroborating evidence. No one, not even a conservative.

“Cathy” called and sounded like an old friend. “Hi, Don. This is Cathy and I want to know what you meant by your Kavanaugh column.” I asked if we were friends or knew each other and she admitted we did not. I told her that her question was silly since I made it very clear what the column was all about: you can’t find a man guilty without corroborating evidence to prove guilt. And I was horrified that anyone would even consider such a thing. She used some very vulgar words to characterize me and hung up when I challenged her to tell me seriously if all women can always be believed. She called back in a few minutes and said, “Don, don’t try to make decisions based on a 3,000-year-old book.”

Well, everyone has to have a foundation for what he or she believes and I choose to believe the Bible as being the inspired, inerrant, infallible, and indispensable standard for my life. Now, because I believe in a perfect Book does not make me or all my decisions perfect since I am a flawed individual. But I do have a standard that helps me make minor and major decisions in my life.

So, the Bible and thousands of years of history support the fact that a rape victim must resist or there is no rape. My critics have presented all kinds of scenarios to prove the Bible wrong: what if she is incapacitated, she is deaf and dumb, she is too scared, etc. However, that’s covered in God’s command for the Jews to do justice for all under all conditions.

The Jews did not have police or prison system until the time of the Kings. Egypt did have prisons as per Joseph in prison after being falsely accused of rape. However, the Jews did have a justice system that included Cities of Refuge. Furthermore, Deut. 16:18 commanded Israel to appoint highly qualified judges to administer justice to the aggrieved and to enforce weights and measurements in each town. When they found anything wrong, they brought the offender before the magistrate at the city gate (where business was transacted and cases decided in the East), and the offender was punished by the officer on the spot.

The following verse warns judges, “Thou shalt not wrest judgment; thou shalt not respect persons, neither take a gift.” The judges were to do right to all and wrong to none. The judge’s personal opinion didn’t matter. The poverty or prosperity or position of the accused and accuser were to be totally irrelevant.

Screaming feminists obviously do not believe in that high view of justice for all. Well, that’s not exactly true because if they were the accused, they would be quoting the Bible, the Koran, the Book of Mormon, and the Talmud. They would parrot even the U.S. Constitution in their own defense! Maybe even the babblings of ancient Druids to gain any support.

When rape occurred, the two principals were brought before the city fathers who compiled the facts, listened to the charges, heard the witnesses, and made a decision. If a maid were mute then, of course, she could not cry out and she would not be complicit in any illegal sexual activity. The rapist was then judged to be executed and was then stoned, the normal and the most ancient form of execution. The victim and any witnesses cast the first stones followed by other citizens. It was not vigilantism but an organized, methodical, and judicial procedure.

During the hearings, I believed Ford was honest but mistaken about her attacker. I felt sorry and pity for her; however, it is now my opinion that she is a liar and tool of evil, unprincipled Democrats. She lied about her fear of flying; she lied about being claustrophobic; she lied about the polygraph test; she lied about her ex-boyfriend’s credit card and charged $600 on it; and she lied about when her second front door was installed. My daddy the philosopher with a sixth-grade education said, “Anyone who will lie will do anything.” Daddy was right.

Ford should be fired from her university position and get a job as a greeter at Walmart.