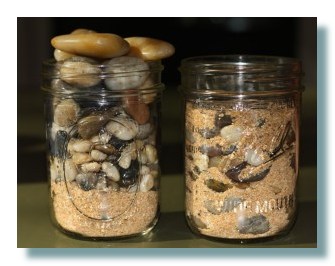 A philosophy professor stood before his class with some items on the table in front of him. When the class began, wordlessly he picked up a very large and empty mayonnaise jar and proceeded to fill it with rocks, about 2 inches in diameter. He then asked the students if the jar was full. They agreed that it was.

The professor then picked up a box of pebbles and poured them into the jar. He shook the jar lightly. The pebbles, of course, rolled into the open areas between the rocks. He then asked the students again if the jar was full. They agreed it was.

Then the professor picked up a box of sand and poured it into the jar. Of course, the sand filled up everything else. He then asked once more if the jar was full. The students responded with a unanimous “Yes.”

“Now,” said the professor, “I want you to recognize that this jar represents your life. The rocks are the important things – your family, your partner, your health, and your children – things that if everything else was lost and only they remained, your life would still be full. The pebbles are the other things that matter – like your job, your house, your car. The sand is everything else…the small stuff. If you put the sand into the jar first, there is no room for the pebbles or the rocks. The same goes for your life.

If you spend all your time and energy on the small stuff, you will never have room for the things that are important to you. Pay attention to the things that are critical to your happiness. Play with your children. Take your partner out dancing. There will always be time to go to work, clean the house, give a dinner party and fix the disposal.

Take care of the rocks first – the things that really matter. Set your priorities. The rest is just sand.”

This story may seem senseless to some. But, all it takes is one crisis, one cancer report, one significant failure, or one loss by death or failure, to really discover what matters in life. Don’t let the small stuff take up your time, energy and resources.  An unknown author said, “Refuse to fight small battles with petty people. Your life is bigger and better that.”

Melchor Kim says, “Truthfully, the most important thing in life is knowing what the most important things in life are and prioritizing them accordingly. Maturity is not when we start speaking big things. It is when we understand small things.” In other words, as Suman Rai says, “When we start to recognize that don’t have all the time in the world, we see our priorities most clearly.”

In many ways, the entire life of Jesus was about setting priorities and adhering to them. When he said, “Let the dead bury the dead’” to the excuse-filled man, He was speaking about the need not to be distracted from the real and most important goal, even in those emergency situations that claim our attention (Matthew 6:3). In other words, get your priorities straight and everything else will fall into place.

Don’t fear failure. Instead, fear succeeding at something that doesn’t matter.

Another big thing to consider is receiving Christ into your life. In fact, it’s the most imperative decision you will ever make. Christ is called The Rock of Ages. Your salvation is the biggest rock among those rocks. And, your salvation matters.