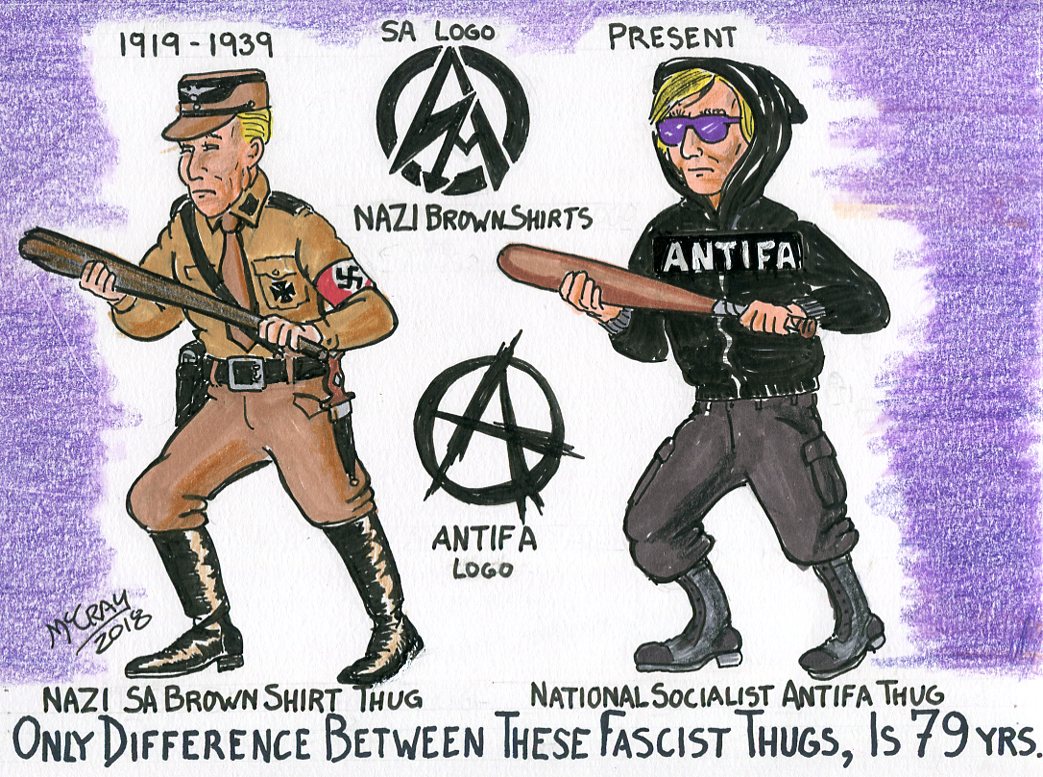 Political thugs running loose on the streets attacking political opponents and destroying property is not a new phenomenon. The 1920s through the 1930s saw the street thugs of Hitler’s National Socialist German Workers Party (NAZI Party), the SA Brown Shirts, terrorize the population, literally stomping out the opposition and convincing the German people to support Hitler. The (SA) Strum Abteilung, which means Assault Detachment, was the Nazi Party’s private army, initially made up of World War 1 veterans; it also absorbed losers, thieves, murderers, street punks and sadistic defectives. The SA also served as the springboard for the SS, Schutzstaffeln or Protection Unit that was Hitler’s bodyguard. The SS evolved into the feared military force, the fanatical Waffen SS which operated the Death Camps and were responsible for the extermination of the Jews of Europe.

Since the end of World War 2 in 1945, the cry of ‘Never Again’ has been repeated over the decades and it refers not only to the attacks on the Jewish People but the resurgence of the NAZIs or similar clones. Unfortunately, we are seeing history repeating itself with the Socialists who are now controlling the Democrat Party and using street thugs who are calling themselves Anti-Fascist or ANTIFA. All of these groups are National Socialist Fascist and are following the playbook of Hitler’s SA Brown Shirts. One of their primary financiers, George Soros was a Nazi Collaborator in his own country of Hungary during the Nazi occupation in World War 2. The ANTIFA groups are made up of Socialist extremist, anarchist, street punks, and opportunists who like to attack people and destroy property. They are a weapon, a paramilitary force, they should be labeled as terrorists and treated as such, they and their organizers and financiers should be locked up using all of the laws that are already on the books.

For a group that calls everyone that disagrees with them a NAZI, they need to look in the mirror - every aspect of the ANTIFA and the SocialistS they provide the muscle for, reeks of National Socialism. They seek a one-party government, they demonize and demean specific groups of people, bar specific people such as conservatives from teaching. They deny freedom of speech by force and would bar private ownership of firearms, stamp out religion, and they are using the press for propaganda. The youth are being indoctrinated in schools, minimizing the parents' authority over their children by emphasizing the control of the all-powerful government.

All that remains is for ANTIFA to raise the Swastika Flag and admit to the world that they are in fact NAZIs in the same mold of Hitler’s NAZIs of World War 2.