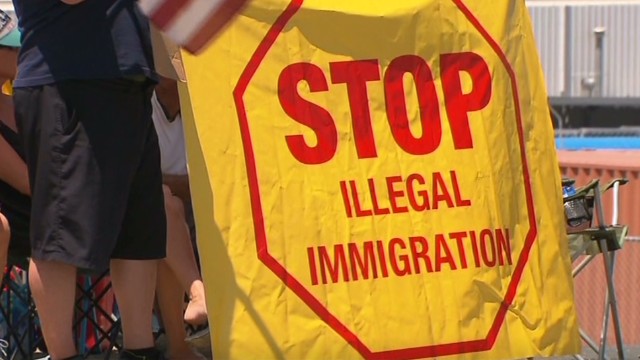 For millennia peoples of one tribe or nation have migrated to the territory of another tribe or nation.
Sometimes it was the peaceful assimilation of the intermingling of different cultures that resulted in a stronger one. More often, however, it led to the domination of the existing culture by a hostile invading culture who, once in control, disempowered or exterminated the existing culture.
Often times it was facilitated by better organized and technologically superior cultures who, while fewer in numbers, had the military skills to dominate the existing native peoples they encountered. However, not always.

Throughout history there have been magnificent civilizations who have been over-run by less sophisticated or advanced cultures due to a decline of vitality and a sort of cultural entropy that basically rendered them either incapable or uninterested in maintaining the same vitality and pride that had helped them to achieve a high standard of living and flourish as a beacon of civilization and innovations. Among these include ancient Egypt, Greece, China, and Rome - all of whom produced innovations, art, and culture that we still marvel at today, and yet all of which were swept away and plunged into dark ages by hoards of encroaching barbarians that they were too weak or disinterested to repel from crossing their borders.
That is exactly where we find ourselves today.
Just like Greece and Rome before us, we have hostile forces of other countries invading our borders. Yes - I said “hostile.” And yes - I am referring to the current ‘caravan’ of thousands of hostile invaders from other countries advancing on our southern border with the objective of forcing their way across.
What else would else would you call people from another country who marched on your border, carrying the flags of their own sovereign nations while desecrating the flag of your nation? (See the American flags desecrated with a swastika and burned in Tegucigalpa, Honduras.)
These are not the same peoples who have immigrated to America for centuries in hopes of freedom to pursue their ambitions but eager to accept American ideals and assimilate. No, as the past decade has shown us, the new wave of immigrants during the Obama years has regarded America as a hated enemy - a foreign land to be exploited, colonized, and ultimately conquered.
They no longer have any desire to assimilate. Instead, they want to impose the same culture of repression, crime, misogyny, and intolerance that they claimed they were fleeing, onto our shores and create hostile enclaves of their homelands to foster hatred of our country, while at the same time demanding we support them from cradle to grave. That is not immigration - that is occupation.
Look at what has happened in Europe. The civilization of centuries is crumbling in the space of just a few years and it will only get worse. Two opposing and hostile cultures cannot peacefully inhabit the same space
While it may be a sad commentary on the human species, it has never happened in the history of the world. One culture will be submerged by the other. Perhaps it is inevitable but what follows is more chilling. It is usually a dark age of repression, superstition, violence, and ignorance which none of us - even those who naively preach for open borders, would willingly choose to live in.
Just ask those living in dark age Europe after the fall of the Roman empire, where they squatted in ruined buildings and wondered what the bath and sanitation features had been used for.
What can we do?

We must insist that our Congress change the immigration 'sanctuary' laws of 'catch and release' as well as the welfare laws that act as a magnet for the disadvantaged of the world to storm our borders seeking not asylum from persecution, but a cradle to grave support. While that might seem kind and generous in theory, hard facts and history remind us that under those onslaughts no one prospers. Instead of all people being lifted out of poverty, crime, and misery, all people - both the uninvited immigrant and the host countries, ultimately descend into the same chaos and misery that prompted their emigration in the first place.
If we don’t want to go the way of Greece and Rome and hand that kind of future to our children and grandchildren the time to decide if our country and the American dream of E Pluribus Unum, is worth saving is now.
Copyright ©2018
Read more by Ric Wasley
Tweet