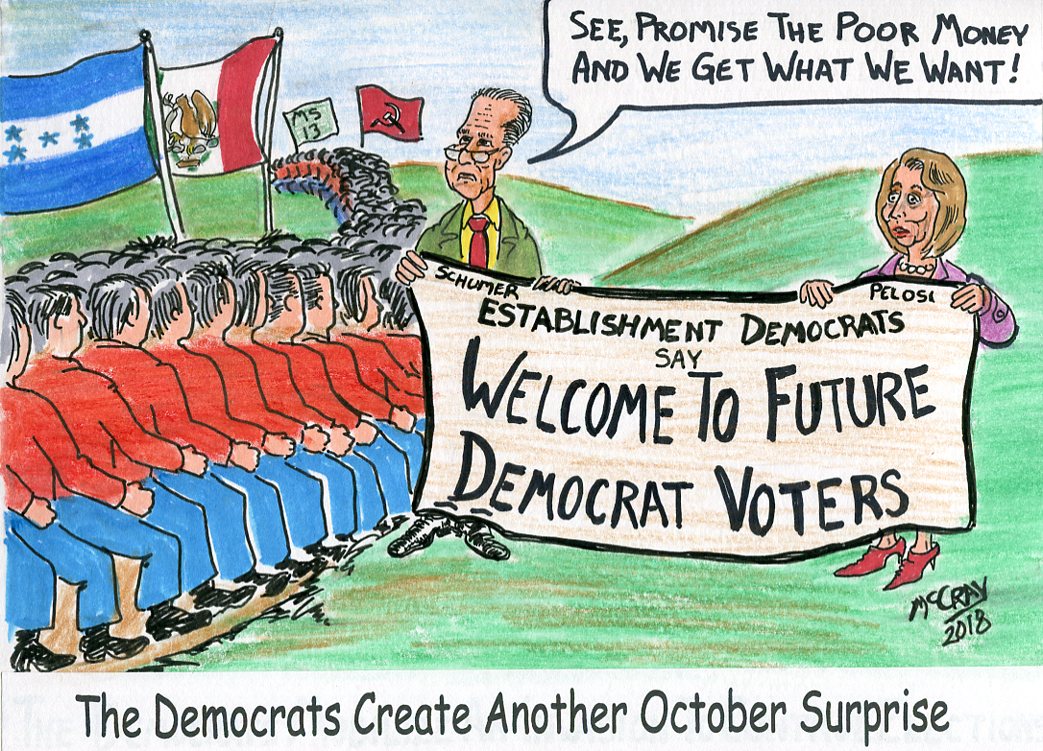 The election tradition continues, the Democrats have tossed out the customary stink bombs timed to cause as much chaos as possible for the Republican candidates.  But this one is a whopper, an estimated 7,000 people from Honduras, Guatemala, Nicaragua, and Mexico, along with a few from the middle-east and Africa are marching north to the United States. Venezuela and the usual left-wing bad actors are funding a mass migration which is now marching up through Mexico with the United Nations Refugee Relief handing out food and water. The march organizer Bartolo Fuentes, is a well know socialist activist in Honduras who is known as the Coyote to the Honduran Government for his ‘Without Borders’ radio show. Unfortunately for Mister Fuentes, he is no longer leading the march, as Guatemala Authorities grabbed him and have deported him back to Honduras.

Our highly accurate left-wing news media stated that the march consisted of mostly women and children; well surprise, surprise, 80% of the march is made up of young men, along with a contingent of MS-13 Gang members who seem to be riding herd. Also, there are reports of another 2,000 marchers assembling in Honduras - the logistics of such a march requires a lot of early planning probably going back to last year as insurance for the mid-term election. All of this is designed to make the Trump Administration look bad, either by having to put the military on the border as a heartless big meanie or as an incompetent unable to deal with an invasion of the United States.

Then out of the blue comes all of these bombs sent to all of the luminaries of the Democrat Party; the latest count is 12 bombs have been delivered and none, not even one, went ‘BOOM.’  Now, the bomb maker is either a complete idiot or the bombs were never intended to go ‘BOOM.’  Right out the gate comes the Democrats Propaganda Ministry, better known as Left-Wing Press with their hair on fire screaming it’s all Trumps fault and his deplorables are responsible.

Yet, what is unique is the impeccable timing, this bomb story hits the press and all of the news programs push everything else off the editor’s desk, covering only the bomb story 24-hours a day.  It’s like, watch what I’m doing with my right hand, but don’t look at what I’m doing with my left hand. The product of this mad bomber is most likely designed to be a stinker, to only blow up the headlines, so there is minimum reporting on the great march of Mexico till the right time. Just wait for something to happen on the Mexico-U.S. border and the bomb story will be dropped to page 10 and only to be reported on the late night news. You 'gotta’ wonder what’s next, like maybe Nancy Pelosi scaring the hell out of the secret service by streaking the White House on Halloween night?