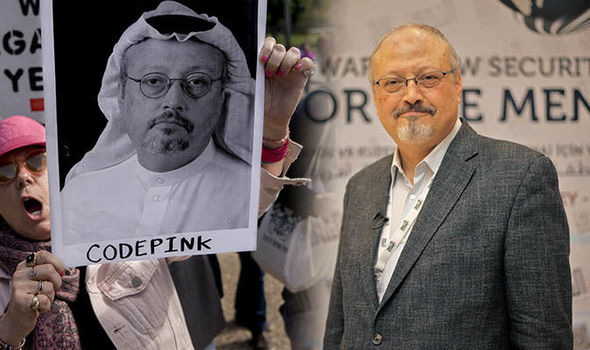 Is it conceivable that the Muslim Brotherhood propagandist working for the Washington Post, living in America, was targeted for murder by the Crown Prince of Saudi Arabia?

Jamal Khashoggi, former editor-in-chief of Al-Arab News Channel, was an unabashed apologist for Islamic terrorism, friends with Osama Bin Laden and President Recep Erdogan (Turkey), cousin of Dodi Fayed, a Muslim Brotherhood activist, a hater of Israel, opposed Saudi’s intervention against Iranian backed rebels in Yemen, a critic of President Trump, and a prominent detractor of King Salman and of Crown Prince Mohammed bin Salman.
Khashoggi went into exile in 2017 and lived in Turkey before moving to the United States. He was visiting Turkey where his young Turkish fiancé, who would have become his 4th wife, lives. He was at the Embassy for legal divorce documents from his Saudi 3rd wife. Following hapless denials, Saudi acknowledged that Khashoggi died in the Turkish Saudi Embassy.

Suspension of planned military sales would wreak havoc on the American-Saudi relationship. Congress can block these sales. Some US Congress members and media pundits have deduced that Saudi Arabia assassinated Khashoggi with the knowledge and forethought of the Crown Prince, demanding extreme penalties. They did not want to know what happened in Benghazi and were indignant when President Trump used economic pressure on President Erdogan to free American hostage Pastor Andrew Brunson.

There are uncorroborated tales about torture, death, and dismemberment. One possibility is that the Saudis had a kidnap plan that went wrong and accidentally killed him. If the plan was murder, why not hire a “hit” near his Virginia home; rather than send 15 easily traceable Saudi men to Istanbul for a one-day round trip? According to the Washington Post, “US Intelligence intercepted communications of Saudi officials discussing a plan to capture Khashoggi.”

President Erdogan, an arch-rival of Saudi Arabia, masterly orchestrated a steady stream of macabre unverified leaks to the media. Mr. Erdogan is calling for “justice for journalist Khashoggi.” In the failed 2016 coup, Turkey had 50,000 political prisoners. The United Nations listed 180,000 as detained and tortured, including professors, judges, law enforcement, military, and over 300 journalists.

President Trump said in a Wall Street Journal interview “The Prince is running things…” My first question to him was “Did you know anything about it, in terms of the initial planning? Prince Mohammed replied that he didn’t.” He asked, “Where did it start?” Mohammed said, “It started at lower levels.”

The United Arab Emirates is in full solidarity with Saudi Arabia. We are waiting for things to become clear. Iran has put its propaganda machine to work in the Khashoggi affair.

Egypt stands with Saudi Arabia. Turkey and Qatar spread lies about it. We stress the importance of arriving at the truth of a transparent investigation.

Jordan rejects any attempts to harm Saudi Arabia. Saudi has taken steps in an attempt to expose the truth, to obtain full justice.

Bahrain declares unqualified support for Saudi Arabia a central element in the Arab and Muslim world.

Articles in the Saudi press call for Saudi Arabia to invest in media; because Al Jazeera and the global foreign media have been in a campaign against The Kingdom. They want a pro-Saudi perspective to the world, especially in times like this, of crisis.

Fifteen Saudis including security forces, flew to Istanbul and participated in the operation that left Khashoggi dead, then left the country. Five high ranking military officials and advisors have been fired, and 18 more have been arrested as a result of the initial investigation. Factual details surrounding the death remain undisclosed.

The Prince has advocated reforms on the authoritarian but modernized model of Kingdoms Dubai and Abu Dhabi; allowing women limited rights such as voting, driving, and attending sports events. He joined in the blockade of Qatar and has arrested Muslim Brotherhood activists in Saudi Arabia.

If this were a Middle East chess game, Saudi Arabia and UAE would be on one side of the board; Turkey and Iran on the other. Khashoggi is a propaganda nirvana for those opposing Crown Prince Salman and Saudi Arabia. Stench surrounds the propagandized death scenarios which are meant to destroy the relationship between the Saudis and the US.

We know that a terrible thing happened, that Jamal Khashoggi died at the Saudi Embassy in Istanbul at the hands of Saudi nationals. We do not know how he died or how far up the Royal Kingdom’s ladder the affair might climb. Withholding judgment on the Crown Prince until all the facts are known seems the least that America should do.