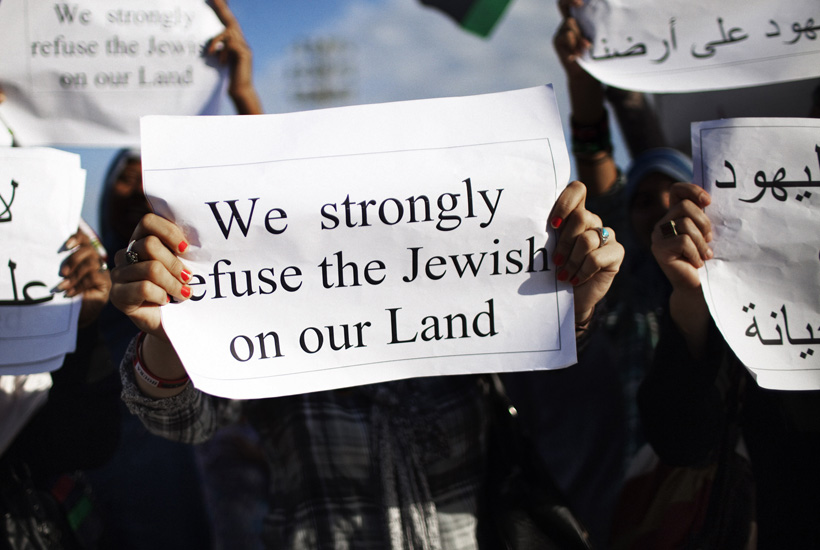 I have noticed in recent months that President Donald Trump has been blamed for disastrous weather, racism, mass shootings, a hostile citizenry, radicalizing more people than ISIS, and now anti-Semitism that resulted in the murder of innocent Jews in the presumed safety of their synagogue. However, that opinion is obviously biased partisanship on the part of political opponents and radical leftist media—but then I repeat myself.

No one wants to really discuss hatred of Jews as expressed from the local mosques to the haters in Saudi Arabia, Iran, Jordan, et al. While all reasonable people believe in free speech, even offensive speech, no sane person can defend Muslim leaders who belch out poisonous pronouncements against Jews and Christians. Why the inconsistency? Of course, those on the left are notorious for their inconsistency.

When Mohammed pointed his toes upward as he anticipated seeing his assigned 72 green-eyed virgins, his followers began fighting for leadership of the nascent religion. He died (some scholars say poisoned by his favorite wife, Aisha) while cursing Christians and Jews and his invective had poisoned his followers. He had often proved his animus toward Jews and Christians by killing those critical of him. One such critic was Kab, a Jewish poet and Mohammed had him killed. Following the murder of Kab, Mohammed ordered, “Kill any Jew who falls into your power.”

As he built his army, having been booted from his hometown Mecca but now in control in Medina, Mohammed discovered that Jewish towns were an easy and rich target. He and his holy robbers started attacking their settlements, especially those that specialized in gold and silver. Mohammed continued to raid Meccan caravans with sporadic success. Back at Mohammed's hometown of Mecca there was concern that he was "getting too big for his britches," so they attacked him. In 627, the Meccans were besieging Medina and the Battle of the Trench followed. Some Jews helped in defense of the city, but most were neutral. Mohammed questioned their loyalty, and after the battle, he had all the Jews in the crosshairs. He said that the judgment of God was, "the Jews shall be killed."

During the night, ditches were dug across the marketplace of the city. In the morning, Mohammed ordered the male captives to be brought forth in companies of five or six at a time. Each company was forced to sit in a row on the edge of the trench (mass grave) and each captive was beheaded. The bodies were cast in the trench. Some of the women were given to his troops and others sold into slavery. The butchery lasted all day and into the night with the killing of more than 800 Jewish men. After the killing spree was over, Mohammed relieved his stress by sleeping with Rihana whose husband and all male relatives had just been beheaded! War is so stressful! And civilization marches on.

Of course, the above massacre (admitted by Muslim and Western historians) was very profitable. After Mohammed squirreled away his normal 20% of the booty, the rest was divided among his followers. And he got more followers. After all, ladies, loot, and land were available for the taking, and they took.

The above massacre is denied by some uninformed or dishonest Muslims, but it is a fact of history recorded in the New Encyclopedia Britannica: "Some of the evidence against him such as his connivance at assassinations and his approval of the execution of the men of a Jewish clan, are historical matters that cannot be denied."

With the beheading of over 800 Jewish men following the Battle of the Trench, Muslims tried to make the most from a very bad experience and suggest that it was a battlefield decision. We are told the Jews were the enemy and suffered the brutal results of war but not so. The Jews were not involved in the fighting. Mohammed simply was not satisfied with their lack of enthusiasm for the battle. He hated Jews and so do his followers today.

The Koran is rife with hatred for Jews. Sura 2.88 says, “Our hearts are covered. Nay, Allah has cursed them on account of their unbelief; so little it is that they believe.” Sura 5.51 commands, “O you who believe! do not take the Jews and the Christians for friends.” Sura 5.60 reveals that Allah turned Jews into “apes and swine.”

Through the centuries, Muslims have made a conscious decision to only tolerate Jews and Christians. Often, they also humiliated them by forbidding them to ride horses (jackasses and mules permitted); their homes and houses of worship could not be as high or as elaborate as Islamic buildings, and often Jews could not hold public office. Over the course of more than ten centuries, the use of a special badge to mark Jews was to subdue and humiliate them. In the middle ages, Catholic bishops and, eventually, Nazi leaders did the same thing in occupied Europe.

Benny Morris writes that one symbol of Jewish degradation was the phenomenon of stone-throwing at Jews by Muslim children. Morris quotes a 19th-century traveler: "I have seen a little fellow of six years old, with a troop of fat toddlers of only three and four, teaching [them] to throw stones at a Jew, and one little urchin would, with the greatest coolness, waddle up to the man and literally spit upon his Jewish gaberdine [outer coat often worn by Jews]. To all this the Jew is obliged to submit; it would be more than his life was worth to offer to strike a Mahommedan." (Morris, Benny, Righteous Victims: A History of the Zionist-Arab Conflict, 1881–2001.)

Speaking at a conference on anti-Semitism in Israel recently, the UK’s Chief Rabbi Ephraim Mirvis said something that would not normally be expressed among liberal interfaith circles in Britain: “The threat to Judaism and Jews from the world of Islam is one which can only be cured from within the world of Islam. And the leaders of Islam have to take a stand.”

Thus far, the Islamic stand on Jewish persecution has been like a chicken with two broken legs.

The hadiths are even more vicious than the Koran in anathematizing the Jews as revealed by Schweitzer and Perry: “They are debased, cursed, anathematized forever by God and so can never repent and be forgiven; they are cheats and traitors; defiant and stubborn; they killed the prophets; they are liars who falsify scripture and take bribes; as infidels they are ritually unclean, a foul odor emanating from them – such is the image of the Jew in classical Islam, degraded and malevolent.” (Schweitzer, Frederick M., and Perry, Marvin, Anti-Semitism: myth and hate from antiquity to the present.)

It is no surprise that Jews are being persecuted today since that is their history. They have been the scapegoat for various plagues, natural disasters, drought, and any anomaly of nature. Muslims must share much of the blame for the vile, vicious, and vulgar treatment of Jews, but few are willing to put Muslims under the bright light of truth.

Instead of casting stones at President Trump, it is time to cast a few questions at the brutal, bloody, barbaric, and backward religion of Islam. The Democrat leadership should ask the Council on American-Islam Relations (CAIR) the following questions since they speak for all Muslims in America:

1. Does Israel have a right to exist as a free nation within secure borders?

2. Do you consider Jews to be “apes and swine”?

3. Will you repudiate all vicious statements made by anyone against Jews?

4. Will you repudiate the shelling of Jerusalem by radical Muslims in Gaza?

5. Will you challenge and renounce the statement in the Hamas Charter that declares, "Israel will exist and will continue to exist until Islam will obliterate it"?

6. Will you denounce the former President of Egypt who said in 1967, "Israel has continued too long...the battle has come in which we shall destroy Israel"?

7. Will you disavow the President of Iran in 2012 who said, “Israel has no roots in the Middle East and would be ‘eliminated’”?

8. Will you disavow, dismiss, and denounce the Ayatollah Ali Khamenei’s 2012 statement that “Israel is a cancerous tumor that should be cut and will be cut”?

If CAIR refuses to make it clear where they stand on mistreatment, malevolence, and murder of Jews all over the world, then most people of goodwill will consider them sanctimonious hypocrites and the enemy of all people of goodwill.

And I suggest that the Democrats and media moguls stop blaming President Trump for everything including sunspots, leprosy, El Niño, black holes, and dandruff.

A recent news report was that Barbra Streisand accused Trump of making her fat. I kid you not!