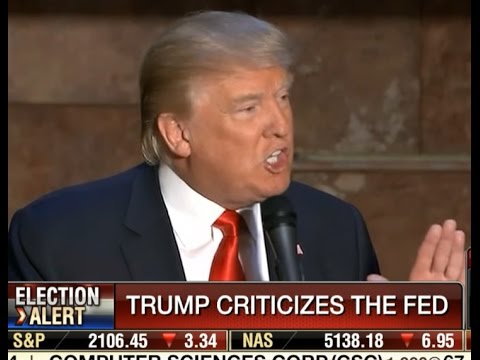 President Trump has stepped up his criticism of the Federal Reserve, saying of its aggressive interest rate hikes that it has “gone crazy.” The same charge has been leveled against Trump, but there may be a method to his madness...

October was a brutal month for the stock market. After the Fed’s eighth interest rate hike on September 26, the Dow Jones Industrial Average dropped more than 2,000 points and the NASDAQ had its worst month in nearly 10 years. After the Dow lost more than 800 points on October 10 and the S&P 500 suffered its first week-long losing streak since Trump’s election, the president said, “I think the Fed is making a mistake. They are so tight. I think the Fed has gone crazy.” In a later interview on Fox News, he called the Fed’s rate hikes “loco.” And in a Wall Street Journal interview published on October 24th, Trump said he thought the biggest risk to the economy was the Federal Reserve, because “interest rates are being raised too quickly.” He also criticized the Fed and its chairman in July and August.

Trump’s vocal criticisms are worrisome to some commentators, who fear he is attempting to manipulate the Fed and its chairman for political gain. Ever since the 1970s, the Fed has declared its independence from government, and presidents are supposed to avoid influencing its decisions. But other Fed-watchers think politicians should be allowed to criticize the market manipulations of an apparently out-of-control central bank.

Why the Frontal Attack?

Even if the president’s challenges are a needed check on the Fed, it has been questioned whether he is going about it in the right way. Challenging the central bank in public forces it to stick to its guns, because it must maintain its credibility with the markets by showing that its decisions are based on sound economic principles rather than on political influence. If the president really wants the Fed to back off on interest rates, it has been argued, he should do it with a nod and a nudge, not a frontal attack on the Fed’s sanity.

True, but perhaps the president’s goal is not to subtly affect Fed behavior so much as to make it patently obvious who is to blame when the next Great Recession hits. And recession is fairly certain to hit because higher interest rates almost always trigger recessions. The Fed’s current policy of “quantitative tightening” – tightening or contracting the money supply – is the very definition of a recession, a term Wikipedia defines as “a business cycle contraction which results in a general slowdown in economic activity.”

This “business cycle” is not something inevitable like the weather. It is triggered by the central bank. When the Fed drops interest rates, banks flood the market with “easy money,” allowing speculators to snatch up homes and other assets. When the central bank then raises interest rates, it contracts the amount of money available to spend and to pay down debt. Borrowers go into default and foreclosed homes go on the market at firesale prices, again to be snatched up by the monied class.

But it is a game of Monopoly that cannot go on forever. According to Elga Bartsch, chief European economist at Morgan Stanley, one more financial cataclysm could be all that it takes for central bank independence to end. “Having been overburdened for a long time, many central banks might just be one more economic downturn or financial crisis away from a full-on political backlash,” she wrote in a note to clients in 2017. “Such a political backlash could call into question one of the long-standing tenets of modern monetary policymaking – central bank independence.”

And that may be the president’s end-game. When higher rates trigger another recession, Trump can point an accusing finger at the central bank, absolving his own policies of liability and underscoring the need for a major overhaul of the Fed.

Trump has not overtly joined the 'End the Fed' campaign, but he has had the ear of several advocates of that approach. One is John Allison, whom the president evidently considered for both Fed Chairman and Treasury Secretary. Allison has proposed ending the Fed altogether and returning to the gold standard, and Trump suggested on the campaign trail that he approved of a gold-backed currency.

But a gold standard is the ultimate in tight money – keeping money in limited supply tied to gold – and today Trump seems to want to return to the low-interest policies of former Fed Chair Janet Yellen. Jerome Powell, Trump’s replacement pick, has been called “Yellen without Yellen,” a dovish alternative in acceptable Republican dress. That’s what the president evidently thought he was getting, but in his October 24th Wall Street Journal interview, Trump said of Powell, “he was supposed to be a low-interest-rate guy. It’s turned out that he’s not.” The president complained:

Trump acknowledged the independence of the Fed and its chairman but said, “I’m allowed to say what I think...I think he’s making a mistake.”

Presidential Impropriety or a Needed Debate?

In a November 2016 article in Politico titled “Donald Trump Isn’t Crazy to Attack the Fed,” Danny Vinik agreed with that contention. Trump, who is not a stickler for consistency, was then criticizing Fed Chair Janet Yellen for keeping interest rates too low. Vinik said that while he disagreed with Trump’s interpretation of events, he agreed that the president should be allowed to talk about Fed policy. Vinik observed:

"The Federal Reserve is, by definition, not independent. Unlike the Supreme Court, the central bank is a creation of Congress and is accountable to lawmakers on Capitol Hill. It can be changed—or abolished—by Congress as well. And to pretend it’s not—to treat the Fed as an entity totally removed from American politics—also leaves us powerless to talk about the ways it might be improved.

. . . The long tradition of deference to the Fed’s policy independence can even pose a risk: It creates an environment in which any critique of the Fed is seen as out of line, including the idea of reforming how it works."

Vinik quoted Andrew Levin, a Dartmouth economist and twenty-year veteran of the Fed, who published a set of recommended central bank reforms in conjunction with the Center for Popular Democracy’s Fed Up campaign in 2016. One goal was to make the Federal Open Market Committee, which sets Fed policy, more representative of the American public. The FOMC is composed of the president of the New York Fed, four other Federal Reserve Bank presidents, and the Federal Reserve Board, which currently has only four members (three positions are vacant). That means the FOMC is majority-controlled by heads of Federal Reserve Banks, all of whom must have “tested banker experience.” As Vinik quoted Levin:

"The Federal Reserve is a crucial public agency, so there are lots of important questions—including the selection of its leaders, the determination of their priorities, and the specific strategy that they’re following—that should all be open to public discourse."

Vinik also cited Ady Barkan, the head of the Fed Up campaign, who agreed that questioning Fed policy was appropriate, even for the president. Barkan said the Fed’s independence comes from its structure: its leaders are appointed, not elected, for long terms, which inherently insulates them from political pressure. But the Fed must still be accountable to the public, and one-way policymakers fulfill that responsibility is through public comments. Monetary policy decisions, said Barkan, are therefore appropriate topics for political debate.

According to Timothy Canova, Professor of Law and Public Finance at Nova Southeastern University, the Fed is not a neutral arbiter. It might be independent of oversight by politicians, but Fed “independence” has really come to mean a central bank that has been captured by very large banking interests. This has not always been the case. During the period coming out of the Great Depression, the Fed as a practical matter was not independent but took its marching orders from the White House and the Treasury; and that period, says Canova, was the most successful in American economic history.


The Fed’s justification for raising interest rates despite admittedly low inflation is that we are nearing “full employment,” which will drive up prices because labor costs will go up. But wages have not gone up. Why? Because in a globalized world, the availability of cheap labor abroad keeps American wages low even if most people are working (which is questionable today despite official statistics).

Higher interest rates do not serve consumers, homebuyers, businesses, or governments. They serve the banks that dominate the policy-setting FOMC. The president’s critiques of the Fed, however controversial, have opened the door to a much-needed discourse on whether the fate of the economy should be in the hands of unelected bureaucrats marching to the drums of Wall Street.

Postscript: The stock market has turned positive as of this writing (November 1), but the rebound has been led by the FANG stocks – Facebook, Amazon, Netflix, and Google. As noted in my article of September 13th, these are the stocks that central banks are now purchasing in large quantities. The FANG stocks jumped in unison on October 31, although only one (Facebook) had positive news to report, suggesting possible market manipulation for political purposes.