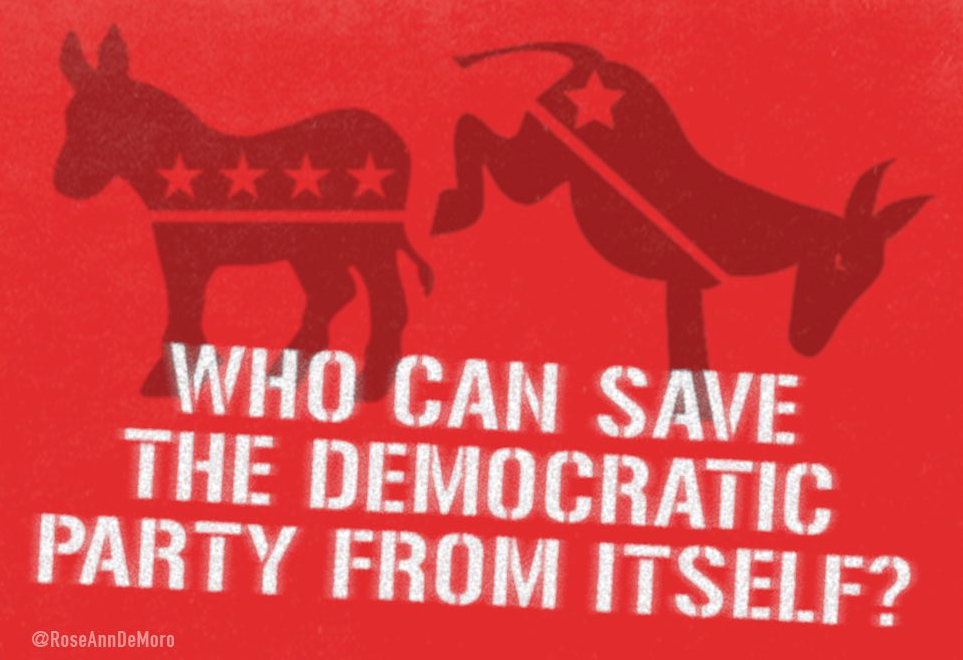 What must happen before decent, thoughtful Democrats leave the party of their fathers? But then, the Democrat Party is no longer your father’s party. It is a totally different creature that Scoop Jackson, Harry Truman, and super-conservative Larry McDonald would not recognize. Every member of my family in West Virginia was a Yellow Dog Democrat - meaning they would vote for a yellow dog before voting for a Republican. When I decided to run for the Indiana House of Representatives in 1976 as a Republican (a Reagan Republican), my conflicted father reluctantly gave his blessings and even voted for Reagan in 1980.

The Boys’ family thought that Hell had frozen over, but in those days, no one was interested in theology except me and I knew better. But it was a big deal for Dad to vote Republican.

Many years later, I left the GOP because the Grand Old Party morphed into the Grand Old Progressives, so I even wonder how principled Republicans can stay in that party. But in spades for Democrats.

Surely decent Democrats are embarrassed almost daily by their leaders making outrageous charges simply to score points with their dumb, deceived, and the delusional members. Their actions during the Supreme Court hearings, their political ads, and their nonsensical accusations during the political season make a buzzard sitting on a dead carcass look like the essence of elegance.

While people in both parties can disagree about tariffs, foreign policy, and the deficit, surely no one really tries to defend killing innocent unborn babies; same-sex “marriage”; permitting males in women’s restrooms or locker rooms because they think they are female when their genitalia screams their manhood; or the invasion of America by foreigners who may be unhealthy, uneducated, and unrepentant terrorists, or even arrogant caravanners and others who are trying to defy and upend our laws.

Can far left “progressive” positions like the above really be defended? Do Democrats even try to defend such positions or do they simply call people who are critical of the above racists, homophobes, and bigots? But then, that is much easier than defending one’s position.

Some principled Democrats began thinking about their association with a corrupt party when the shenanigans of Ted Kennedy and Gerry Studds were revealed. As it accelerated into the Clinton administration, it became an avalanche of evil and corruption. With Obama, we were slapped in the face almost daily if we did not worship facing Saudi Araba. It seemed people were given high positions in his administration if they were black and/or Muslim, preferably both. Think of the rogue’s gallery: Holder, Rice, Jarrett, Jones, Lynch, Emanuel, et al. It also seemed to help one’s résumé if one were a female.

Lynch, Rice, and Jarrett are women; however, there was an abundance of females as revealed in Essence magazine issue October 2015 that headlined, “29 Powerful Black Women Who Called The Shots In The Obama Administration!” I looked in vain for a photo of white women who “called the shots” for Obama without success. Likewise, I looked for any Fundamentalist or Evangelical Christian who “called the shots” for Obama but without success. I would have been satisfied whether he or she was black or white.

All of us now know that Obama was photographed with Louis Farrakhan in 2005 while Obama was still a U.S. Senator from Illinois. The Muslim photographer promised to keep the photo secret since it would have destroyed Obama’s budding political career. The photo was released in 2017 when no one cared about Obama or Farrakhan.

Frankly, I would leave any group that had anything to do with Farrakhan. However, he sups and dines with the political elite when he should be making license plates in prison or using a sledgehammer making little rocks out of big rocks. The fact that he has not been investigated by state and Federal officials reflects on the Democrat Party and the Justice Department that deliberately refuses to investigate his hate crimes, advocacy of terrorists, and his audacious anti-Semitism.

Obama had many Muslim Brotherhood (a terrorist group masquerading as religious rights group) operatives—all Islamist activists—in his administration having a major influence over U.S. policy. Mohammed Elibiary was Homeland Security Advisor and appeared at a conference honoring Ayatollah Khomeini! Salam al-Marayati was an Obama Advisor who founded the Muslim Public Affairs Council and is an Israel hater. Eboo Patel was on the Advisory Council on Faith-Based Neighborhood Partnerships and Rashad Hussain was Special Envoy to the Organization of the Islamic Conference. He is famous for memorization of the Koran, proving his devotion to Islam. Dalia Mogahed, an Egyptian-born hijab-clad Muslim American, was the first Muslim woman appointed to a position in the Obama administration.

Other Muslims with ties to the Muslim Brotherhood were Huma Abedin who was Deputy Chief of Staff to Secretary of State Hillary Clinton during Obama’s presidency. Mehdi K. Alhassani was Special Assistant to the Office of the Chief of Staff, National Security Council Staff, and Executive Office of the President. Rashad Hussain was Obama’s special envoy to the Organization of Islamic Cooperation. All stamped: “Approved by the Muslim Brotherhood.”

It has been reported in the national media that former Director of the CIA John Brennan converted to Islam while serving as  CIA station chief in Saudi Arabia during the 1990s. He became Obama’s Homeland Security Advisor from 2009 to 2013 and CIA Director from 2013 to 2017.

The far left Mother Jones magazine reported that eleven of Obama’s confirmed judges were “openly gay.” No, not your father’s party, for sure.

How could any Democrat sleep at night knowing he was a member of a party that promoted such people to places of public trust?

Jesse Helms was a lifelong Democrat and switched to the GOP and became a leading conservative senator. Ronald Reagan also switched and became one of the most effective presidents in U.S. History. While President Donald Trump is not much of a Republican, he did leave the Democrat Party and there is scuttlebutt about some Democrat senators jumping ship after the midterm elections.

However, my biggest concern is not the professional politicians but average working Democrats who need to do the principled thing and leave the party that left them many years ago. No thinking, honest person can defend the platform of the Democrat Party. Far left  issues that Democrat spokesmen are forcing down the throats of Americans would gag a maggot: same-sex “marriage”; transgenderism; the use of any restroom by anyone, depending on what he/she feels like; open borders; sanctuary cities; blatant Socialism that has proved itself a failure wherever it has been tried; higher taxes; statehood for Washington, DC; environmental extremism that will close coal mines and oil wells; universal preschool for every child;  universal health care; grab all guns; debt free college education for all, ad infinitum.  Most of these proposals reek of Socialism and I am surprised, shocked, and stunned that any American, not living in a padded cell, would seriously and unashamedly promote a socialist America.

If many of those hot-button issues become law, they would totally change America and frankly, America has been changed too much already in my opinion. We must understand, if we have not already, that our world has been changed forever for evil, not good. It is past time to start facing reality about radical Democrats coming out of left field. Ayn Rand reminded us that “You can ignore reality, but you cannot ignore the consequences of ignoring reality.”

If the U.S. and our “forces of freedom” are to win, then we must be dauntless, decisive, and determined. It is incredulous that anyone would argue with the plan to Keep America American or the policy of always asking, “What is in the best interest of America?” Would any sane person suggest that we do what is best for some other nation instead?

But a word of caution. We must be vigilant that we don’t become haters of good and decent people who are different from most of us. Such a result would mean that dark forces have been successful in destroying America, and it would no longer be America. We must also hold public officials’ feet to the fire and chain them to the Constitution (notice how smoothly I go from one metaphor to another?).

We must be careful not to become un-American in our desire to remain American!