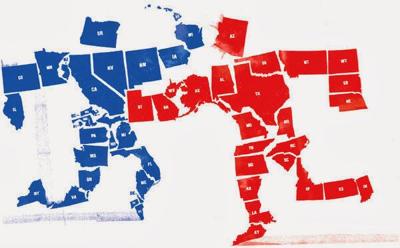 Republican National Committee Ronna McDaniel claims the forecasted Democratic Party blue wave tsunami turned into a ripple. In fact, Democrats could win 40 House seats, the most since Watergate. And another Watergate is what House Democrats have promised for President Trump. Democratic Party moneybags Tom Steyer spent more than $100 million promoting impeachment. He wants a return on investment.

The actual ripple, meaning something small or practically insignificant, best describes the Republican victories in the red states of Texas and Georgia. Republican Senator Ted Cruz barely survived, winning by three points, and Georgia Republican gubernatorial candidate Brian Kemp is claiming victory with just over 50 percent of the vote.

Nevertheless, former Fox anchor Eric Bolling, now with CRTV, claimed that “the blue wave never came” and that “It was all just fake news to try to hurt President Trump.” These deceptions must be challenged. The massive conservative defeats on November 6 are the result of “progressive” determination and conservative weakness, ignorance, and indifference. Fox News, with openly gay Shepard Smith spouting anti-conservative and anti-Trump remarks one hour a day, proved not to be the effective counter-balance to the liberal media. What’s worse, Fox became part of the problem when it banned criticism of hedge fund billionaire and Democratic Party donor George Soros.

Republican victories were few and far between. They picked up one or two seats in the Senate because unpopular Democrats were up for re-election in conservative states. But in Montana, a conservative state, Democratic Senator Jon Tester won a third Senate term, beating Republican Matt Rosendale for whom President Trump campaigned. In Florida, Governor Rick Scott had the legal authority to clean up the corrupt county election systems before he became a Senate candidate whose “victory” is now in doubt. He invited vote fraud shenanigans from the “progressive” political machines.

Trump is a Drag

It’s not fake news to recognize the fact that Trump is so unpopular that Republican candidates either can’t win or just barely squeak by in states where they should be winning by big margins. The Gallup polling organization points out that presidents with job approval ratings below 50 percent have seen their party lose 37 House seats, on average, in midterm elections. With a loss of possibly 40 seats, that’s worse than the average. In the race for governor in conservative Kansas, Trump loyalist and Breitbart columnist Kris Kobach was defeated by Democratic State Senator Laura Kelly. The margin was over 4 points.

The anti-Trump wave was so total that, in Minnesota, radical leftist Keith Ellison, the Muslim former Congressman and associate of Louis Farrakhan, won the race for Attorney General, after allegations of abuse from an ex-girlfriend. He will now spend his time suing Trump.

Bolstered by Sean Hannity of Fox News and Rush Limbaugh on the campaign trail, Trump was apparently convinced that talking about illegal immigration and the economy would save his House majority and get conservatives out to the polls. That strategy ignored the social issues which can motivate many conservative and Christian voters. Meanwhile, Democrats developed political machines and propaganda vehicles financed by George Soros, Tom Steyer, and Michael Bloomberg that exploited issues such as “climate change” and gun control. In addition, Oprah’s New Agers were mobilized on behalf of the Democratic Party. We had called this the “Permanent Revolution” in a book published earlier this year.

On the Republican side, billionaires like the Koch Brothers, Paul Singer, Cliff Asness, and Peter Thiel are pushing Trump and the Republicans further to the left on social issues.

In one of their biggest victories, self-proclaimed bisexual Democrat Kyrsten Sinema, a leftist photographed protesting the U.S. military in a pink tutu, beat a military veteran and political moderate, Martha McCally, in Arizona. As analyst Peter LaBarbera points out, McSally and the Republicans failed to challenge or expose Sinema’s oddball beliefs and bizarre lifestyle. In a nearby state, under the influence of Big Marijuana, Colorado went “dark blue” and elected a gay governor, former Democratic Rep. Jared Polis, who was praised on Fox News. In the Midwest, Michigan legalized dope.

The current trends have convinced Dr. Brian Joondeph, a conservative physician, writer and radio commentator, to conclude that Trump could very well be the last Republican president. With Texas and Florida (and possibly Georgia and Arizona) flipping from red to blue, he notes that an electoral shift has been in the works for decades. To dramatize the shift, he notes that Cruz won his Senate seat in 2012 by 57-41 percent, a 16 point margin, but on November 6 the victory was much smaller, 51-48, barely a 3 point margin. His opponent this time, Democratic Congressman Beto O’Rourke, was pro-marijuana and once involved in a drunken-driving incident, fleeing the scene of the crash.

What’s more, ex-felons are now being given the right to vote in many states, adding to the Democratic Party totals. Another Democratic constituency, potheads, are growing in numbers and strength. Former Republican House Speaker John Boehner is lobbying on their behalf for nationwide legalization.

The liberals and their allies have simply worked harder. Conservatives can ridicule “community organizing” all they want. But since the days when Rep. Nancy Pelosi’s “San Francisco Democrats” utilized the political skills of communist preacher Jim Jones and homosexual-activist Harvey Milk, the idea has been to identify and mobilize people and herd them to the polls. The remnants of the Jones-Milk apparatus facilitated California’s left-ward drift ever since more than 900 Jones followers from the Peoples Temple church people killed themselves on November 18, 1978. That sordid story is told in Daniel Flynn’s new book, Cult City, which explores how these operatives exploit the weak, poor, and vulnerable for Marxist revolutionary purposes. Milk, one of Jim Jones’s most vocal supporters, was subsequently assassinated, along with San Francisco Mayor George Moscone, by a fellow Democrat jealous of their political power on November 27, 1978, in what Flynn calls the ten days that shook San Francisco.

Brown is the New White

Taking this strategy to a national level, former President Barack Hussein Obama has pursued, with the help of Brown is the New White author Steven Phillips, the creation of a “new American majority” fusing communists, progressive whites, minorities, Islamists, dopers, homosexuals and transgenders, and immigrants. One can see the success even in red states like Texas and Georgia.

Indeed, Kim Davis, the Christian clerk who had been jailed for refusing to sign a “gay” marriage license lost her re-election race in conservative Kentucky. Establishment Republicans will undoubtedly use this defeat as an excuse to reaffirm their determination to avoid talking about “controversial” social issues. As LaBarbera notes, you can’t even talk about “gay” issues in a negative manner on Fox News anymore. Instead, Fox features gay and lesbian personalities such as Guy Benson and Tammy Bruce, and libertarians like Greg Gutfeld and Lisa Kennedy Montgomery, a former MTV VJ.

A year ago, at an America’s Survival, Inc. conference, analyst Trevor Loudon had warned of the left’s plan to take the concept of Jesse Jackson’s Rainbow Coalition and expand it exponentially. What became the Obama/Steve Phillips strategy is backed by the billionaire Sandler family, who are also behind the liberal website ProPublica.

But before conservatives come to grips with the political reality, including the anticipated impeachment of Trump, they should scrutinize the prognosticators who failed to predict the blue wave and tried to deny it even existed at all.

Former Republican House Speaker Newt Gingrich, whose wife was appointed by Trump as Ambassador to the Vatican, had predicted there would “absolutely” be a red wave. In California, Gingrich had claimed that the candidacy of moderate Republican John Cox as governor would help congressional Republicans hold their seats. Here’s what happened: 53 House seats were up, 39 of which were held by Democrats and 14 by Republicans. Now, after the elections, Democrats will hold a 42-11 edge. Cox won only 40 percent of the vote against Gavin Newsom.

“We’re probably going to gain seats in governorships,” Gingrich added. In fact, Democrats replaced Republican governors in seven states -- Michigan, Illinois, Wisconsin, Kansas, Nevada, New Mexico and Maine – and captured some 300 legislative seats in state houses all across the country. In addition, they captured a majority of state attorneys general.

Radio host Rush Limbaugh, a Reaganite who never voted for conservative President Ronald Reagan, had appeared at a Trump rally. He eagerly accepted Gingrich’s predictions, with a story headlined, “Mr. Newt Predicts a Red Wave.” He cited a Gingrich column in which Gingrich suggested Democratic Senator Bob Menendez might lose in New Jersey to Bob Hugin. Menendez won by over ten points. California Democrats, Gingrich said, were “more vulnerable than they have been in a quarter century,” another erroneous prediction.

Indeed, a story by Dom Calicchio at Fox News captured the depth of the Republican electoral disaster in California:

Democrats hold every statewide office, both chambers of the Legislature and a 3.7 million advantage in voter registrations… A surge in immigrants in recent decades transformed the state and its voting patterns. In Orange County, largely white, conservative homeowners once delivered winning margins for GOP candidates year after year. But most of the state's new voters, Hispanics and Asians, are Democrats or independents. It's also hard to discount the influence of Trump, who lost California by over 4 million votes in 2016. California is home to the so-called Trump "resistance," which has stood in opposition to his policies on the environment and immigration.

It's hard to imagine that Ronald Reagan was governor of California before he became America’s best-known and most successful conservative president.

Limbaugh, after reciting Gingrich’s predictions, said the Republicans would hold the House, “maybe even picking up a couple of seats.” He was off by about 40 seats.

Limbaugh, who claims to be right 99 percent of the time, had run a story on his website, based on one of his monologues, “Democrats Realize They’re in Trouble as Red Wave Builds.” He quoted an “expert on forecast models,” Gerard Francis Lameiro, as predicting there would be a red wave in the House with 225 -- 228 Republicans elected to office and a new Senate with 58 or even 60 Republicans elected to office. The author of a book titled, “The Dawning of the New Conservative Era,” his prediction ran under the headline, “Red Wave Coming in the House and Senate.”

If the Democrats flip the Senate seat in Arizona, and if the Democrats steal the Senate seat in Florida, suddenly the Republican Senate gain would be reduced to just one new seat. This would return the Senate to a 52-48 makeup -- which is exactly how we started when President Trump took office (until the Alabama special election reduced it to 51-49). Losing both Florida and Arizona would mean razor thin margins once again on key votes -- including judges.

Looking on the bright side, Tim Huelskamp, Ph.D., President of the Heartland Institute, says, “Senate majority leader [Mitch] McConnell should continue to fill the courts with Constitution-friendly judges and justices.” But how is that possible when liberal Republican Senators Susan Collins and Lisa Murkowski are able to influence the process? That’s how and why Trump nominated Brett Kavanaugh, who won confirmation promising Collins that he would honor the court’s pro-abortion decisions and hailed the court’s homosexual marriage ruling. Murkowski voted against him anyway.

Now, the victorious House Democrats are threatening to impeach Kavanaugh.

Trump, his enablers, and the Republican Party had no ground game or message to match Obama’s “Brown is the New White” strategy. Equally shocking, conservative media are hailing their failure as a victory! In this case, the “fake news” is coming from Trump supporters and pro-Trump websites ignoring reality.