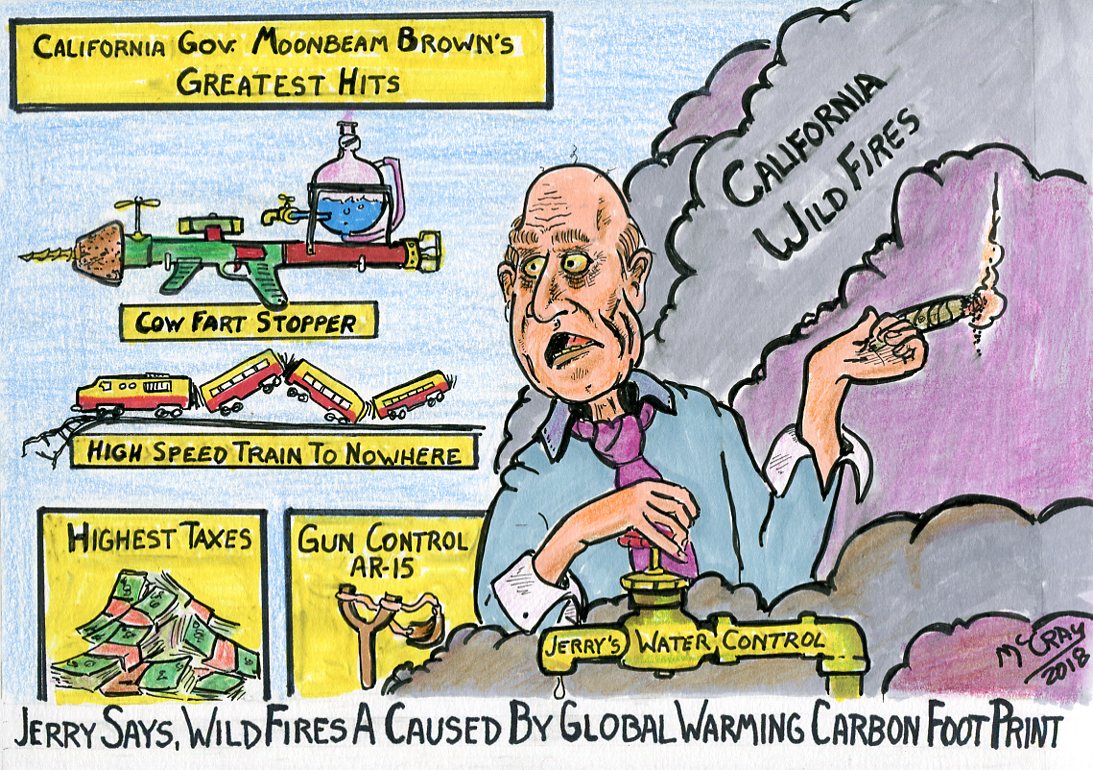 True to form Governor Jerry ‘Moonbeam’ Brown has laid another cracked egg - he is blaming the deadly wildfires in California on the carbon footprint of fossil fuel. As a high priest of the Al Gore, religious Global Warming Sect, Moonbeam Brown has preached and blamed the ills of the world on the carbon footprint for which everyone is responsible. He blew off President Trump’s comments about the over-regulation in California for the ‘leave it alone’ mismanagement of the forestry for the uncontrollable intensity of the fires.

Old Moonbeam Brown is at least consistent, he said the same thing last year regarding the Thomas Fire in California on 9 December 2017, it's all the fault of Climate Change. He was interviewed the following day by 60 Minutes and offered his opinion of President Trump’s disbelief of Climate Change. Saying that Trump’s apparent lack of fear of the “Wrath of God” explains his denial of Climate Change. Jerry Brown earned the nickname ‘Moonbeam’ decades ago for his brainless comments and oddball behavior.

For years it was the ‘SCAM’ of Global Warming and carbon footprints were the fault of everyone and everything. But the predicted disasters from excess CO2 gas, melting the North Pole, and the entire world was supposed to drown failed to materialize. The hokey science guys decided to change the name to Climate Change, it’s still the same big scam created by the control freaks in the United Nations in an attempt to control the United States. Their basic message was and is for the U.S. to surrender our national sovereignty to the United Nations to save the world.

The real scientists who didn’t have their paycheck connected to the U.N., or a left-leaning university, or the Obama Administration, have stated for decades that the Earth is in a cooling trend. The sun’s solar flare activity which is responsible for heat fluctuations has been receding for years to what is called a solar minimum which was confirmed by NASA and the U.S. Airforce in 2011. Dr. John Casey who served as White House Climate Scientist for G.W. Bush and Obama has shown that harsh cold winter peaks can be predicted in 200-year cycles. The warm cycles that usually augment the cold cycles have heat spikes due to increased solar activities that can’t be predicted.

The Earth finished the last part of a 26,000-yr axis wobble cycle on 21 December 2012, that’s the day all the tin foil wearing nuts were screaming about the Mayan Calendar and the world was going to end. The last Ice Age ended 13,000 years ago at the halfway point of the last wobble. As the temperature increased warming the planet, the ice pack began melting. At that time the water level on the earth was 400 feet lower than it is now, the water from the melting ice caused the oceans to rise. The release of water also affects the earth’s wobble, the mass of snow and ice is in the form of millions of tons of weight that is now on the move, through evaporation and runoff.  With the pressure from the weight of the ice no longer pressing down on the earth’s surface, the ground is rising as it rebounds to its pre-ice age levels. This can be seen in the Great Lakes as water levels change causing many streams that fed the Lakes are now flowing back to their source.

In a recent article on www.livescience.com by Stephanie Pappas (09/24/18), she pointed out that as the ice melts in the Permafrost of the polar region, it exposes “sulfide minerals that produce sulfuric acid which dissolves rocks releasing tons of Carbon into the atmosphere.”

As part of the wobble, “the earth’s axis has moved 34 feet since 1899,” we live on a dynamic planet where the only constant that exists with the Earth is change.