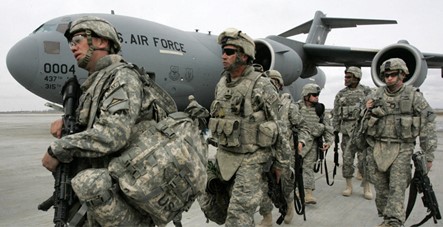 American troops are coming home from the Middle East and it’s about time. In December, President Trump promised to pull troops from Syria, and Afghanistan appears to be next. Almost half a million troops are still stationed in over 150 nations at an enormous cost to America taxpayers. A few of those troops are Marines defending our embassies in very dangerous locations. However, only a few U.S. troops meet the criterion of doing what is best for the U.S. They provide protection and revenue to nations that often resist U.S. efforts in the United Nations. Not too smart, especially if there is no actual benefit to the U.S. by having troops in foreign nations.

We have 300 troops in Norway, 250 in Ukraine, and 3,500 in Poland. A reasonable person asks, “Why are they there?” The Globalists tell us it is because of Russian aggression that everyone recognizes as a continuing and constant threat. But what can a few hundred U. S. soldiers do that Poles and Ukrainians cannot do for themselves? Obviously, their major role is to train, advise, and assist the natives, but how much training is required? Can they not train the locals who can then train others, permitting the Americans to return home?

Critics will scream, “Isolationism” but minding our own business is exactly what our Founding Fathers advised us to do. They wanted us to put America first! We should get involved with other nations only when our best interests demand it.

The Chairman of the Joint Chiefs of Staff Joseph Dunford told Pentagon reporters that the U.S. military has approximately 6,000 troops across 53 out of 54 countries in Africa. Why? How does that benefit us? Why can’t African nations handle their own affairs and if a nation needs help, there are more than 50 other nations on the continent to come to their aid. Who decided that America was the one to call? When was it decided? And upon what basis were we chosen?

About 70,000 U.S. troops are assigned to Pacific Command, with about 42,000 in Central Command, about 35,000 in European Command and about 10,000 assigned to Africa Command. These conventional forces are augmented by about 8,000 Special Operations Command troops stationed in over 80 countries on any given day according to the August 3, 2017 edition of Business Insider. In addition to those troops stationed on permanent bases, there are always thousands of sailors serving on warships deployed worldwide.

Many patriots will disagree with pulling troops out of Syria, mainly because of the possibility of the vacuum being filled by terrorist groups. There is also fear that the Kurds will be slaughtered for their support of U.S. policy and people. Our experiences in the Middle East prove that it is easier to send in troops than to bring them home—think, more than seventeen years in Afghanistan. We are spending 50 billion dollars per year in Afghanistan. That would build a very elaborate Wall along our southern border.

What is often forgotten is that President Assad was elected president of Syria in the nation’s first multi-candidate election in almost 50 years. Sure, he is a butcher but he has been tolerant of Christians and that’s better than lopping off their heads. If he is so undesirable, let the Syrians produce regime change.

A reasonable argument can be made for U.S. troops if a nation requests U.S. support but we have no right to go where we are not wanted. A small, struggling nation has as much sovereignty as the U.S., England, or France. Moreover, the U.S. is not morally or legally obligated to get involved in every beer room brawl, internationally speaking. We should only get involved in other nations if it is in our best interests to do so. Of course, in times of natural disaster, it is only humane to provide temporary support to suffering people. Nation building and regime change should not be options for our politicians. No one has built a legitimate case for the U.S. to be the policeman of the world.

Regime change happens one of three ways. The first way is when a nation simply fails as is happening in Venezuela before the world’s eyes. After years of dictatorship the violence, corruption, hyperinflation, and chronic scarcity of basic goods has driven about 15% of Venezuelans to eat food waste discarded by commercial establishments. Another nation (maybe Cuba) will step in and prop up the government until it is sufficiently able to handle its own affairs.

Another case of change happens following a revolution as in the case of America (1776), Mexico (1910), Russian (1917), Cuba (1960), etc. Or the third kind of change could be a quick, surgical coup d'état that has made African nations infamous.

To our shame, the U.S. has been deeply involved in coups and attempted coups in Cuba when Kennedy tried to kill Castro and in South Vietnam approved the coup of Ngo Dinh Diem. Nixon sicced the CIA on Allende in Chile to topple him. Carter’s CIA engineered a coup in Iran that returned the Shah to power (who soon died of cancer) resulting in bringing to power the Muslim fanatic - the Ayatollah Khomeini. Reagan secretly and illegally supplied funds to anti-communists in Nicaragua and H. W. Bush was involved in removing Noriega from power in Panama. Clinton sent 13 cruise missiles into a Sudan aspirin factory to detract attention from his grand jury testimony (three days earlier) about his “inappropriate relationship” with a White House intern. George W. Bush attacked Iraq and deposed Saddam Hussein, charging him with developing weapons of mass destruction. Obama was involved in the removal of Muammar Gaddafi in Libya.

As is obvious, Democrat and Republican Presidents have exceeded their authority to effect regime change and they got away with it because the desired changes were usually what the Globalists wanted.

However, the U.S. has no business participating in, let alone organizing, financing, and leading such an enterprise. Regime change sounds better than overthrow of a nation, but there is no difference. If a nation wants or needs changing, the local citizens should be the ones who do it. When the U.S. has been involved, our CIA usually does the dirty work. And while all decent people might like the result, the means to achieve a change is often unsavory, unlawful, and untoward. We were thrilled that Saddam Hussein was removed in Iraq but America’s involvement was tawdry. Our efforts at regime change in Iraq, Syria, and Afghanistan have not been successful and are we obligated to continue in that effort forever?

One does not have to be a political genius to realize that Middle East nations have no record of democracy. They are dictatorships, monarchies, and theocracies - all the opposite of freedom. All Muslim nations must look to the Koran for dealing with nation building. It is a fool’s journey when we expect to force freedom on people who have no concept of what it means as they look to a fanatic preacher down at the mosque for guidance in all things.

Nor has anyone built the case for the U.S. as the lender of first resort in times of national financial crises. The paramount question is what is best for America.

After all, don’t all Americans want to make America great again? Moreover, bringing half a million troops home and staying out of every foreign brawl would pay down much of our massive national debt.

When President Trump announced the withdrawal of U.S. Troops, he crawled out on a limb and handed his enemies a saw. I hope he survives and stands for his convictions because the men who have moved the world have been men that the world could not move.