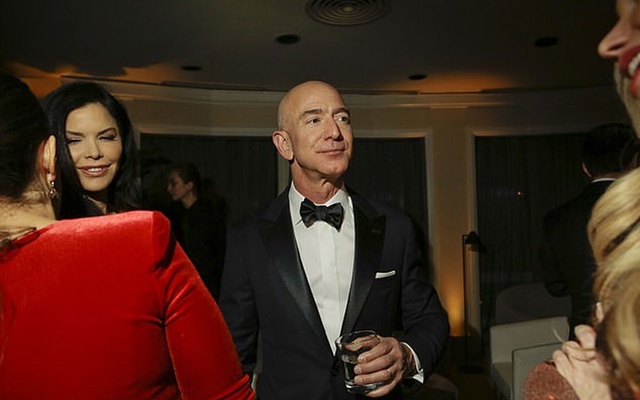 The slogan of The Washington Post is “Democracy dies in darkness.” So I did a search of recent articles on its website about its billionaire owner, Jeff Bezos, who does business with the CIA and NSA and finds himself in the middle of a sex scandal that makes even liberals cringe. I found a story about his announced “split” with his wife in which a lawyer is quoted as saying “the couple’s amicable joint statement indicates that the split probably won’t be messy or protracted.” The lawyer added, “Sounds like they are making an effort to do this the right way and not make it into a public spectacle.”


The “right way” to conduct a divorce has taken a cruel and nasty turn. “It's going to be a beauty,” Trump said of the divorce. It’s a beauty that has turned ugly. His behavior, if the revelations are true, was immoral and reckless. On a personal level, he has embarrassed himself and his family. He and his wife have four children.


We have to be skeptical about revelations from a tabloid. On the other hand, remember that it was the National Enquirer that got the goods on former Democratic Senator and presidential candidate John Edwards, his mistress and baby. The National Enquirer also revealed how Jesse Jackson used his tax-exempt nonprofit corporation to pay his mistress. She quit as director of Jackson’s Washington office and moved to California after tests proved that Jackson was the father of her baby. In the case of Bezos and his mistress, there has been a no comment about the affair.


Most of the media have tried to stay away from the revelations about the “family man” Bezos because it may say something about what he’s been doing with his Trump-hating Post. Perhaps the Post has been a big diversion away from the cozy relationship Bezos has had not only with a mistress but the U.S. intelligence community.

Reporters now speculate about how a divorce will affect his empire. The real issue is his empire’s links to the NSA, CIA, FBI, and Department of Defense. This could have made his personal life of interest to hostile foreign nations and their intelligence services. Let’s call it Bezosgate.

Indeed, one of Bezos’ projects involves what the ACLU calls “a government surveillance infrastructure that poses a grave threat to customers and communities across the country.” Bezos’ software surveillance program known as Rekognition uses facial recognition technology and artificial intelligence to “identify objects, people, text, scenes, and activities.” This is ironic since the National Enquirer conducted its own surveillance of Bezos’ secret activities of a sexual nature. But it appears the reporters used old-fashioned journalism techniques to document Bezos’ private life.

CNN has covered the scandal, but only in terms of whether the story is a case of Trump’s revenge. CNN reported “media insiders” as saying they “wondered about a Donald Trump connection, given that the president has repeatedly criticized Amazon as a company and Bezos as an individual. Trump has repeatedly attacked Bezos on Twitter for how his administration is covered by The Washington Post, which Bezos has owned since 2013.”

In an article last June, former counselor to Obama John Podesta offered his own conspiracy theory, saying the Post owner was emerging “at the top” of a Trump White House “enemies list.” Podesta concluded, however, that “Jeff Bezos is extremely wealthy and can defend himself.” It looks like his lust got the better of him.

The Post’s relentless attacks on Trump can now be perceived as cover for an owner who was allegedly betraying his wife and family for carnal thrills while doing business with the U.S. intelligence community. One photo shows Obama’s Secretary of Defense Ash Carter giving Bezos a tour of the Pentagon in 2016. “If big tech companies are going to turn their back on US Department of Defense, this country is going to be in trouble,” Bezos said. The FBI is also reportedly using the software on a trial basis.

We have long known that the Russia-gate probe of Trump was a case of the intelligence community using a major media organ to mislead the American people. Since Post owner Jeff Bezos does business with the CIA and the NSA, this was always a matter of utmost concern. The charges of sexual misconduct bring this matter to a level that requires more probing.  Who is using whom? Can we expect some Congressional interest from liberals and left-wingers who have said they are concerned about the rise of the surveillance state?

Bezos’ announcement of his divorce made no mention of an alleged adulterous affair. Will the Post hold him accountable for this? Will his contracts with the CIA and NSA now be examined? If the National Enquirer could uncover this damaging material, what about foreign intelligence services?


The Washington Post has a reporter, David A. Fahrenthold, whose job it is to probe every aspect of the life of President Trump, no matter how esoteric and trivial. He was awarded the Pulitzer Prize for National Reporting for his coverage of Trump in 2017. Will he be reassigned to probe his boss? Don’t bet on it.


What we do know is that a Pulitzer Prize should now go to the National Enquirer. But more investigations are needed. What about the socialist do-gooders in the House of Representatives? Will they demand answers from the owner of their favorite Trump-hating newspaper?

One hope is that Bezos wife MacKenzie Bezos gets the newspaper in the divorce settlement and turns it into a true vehicle for accuracy, balance, and fairness. Then, the “Democracy dies in darkness” slogan may finally mean something.