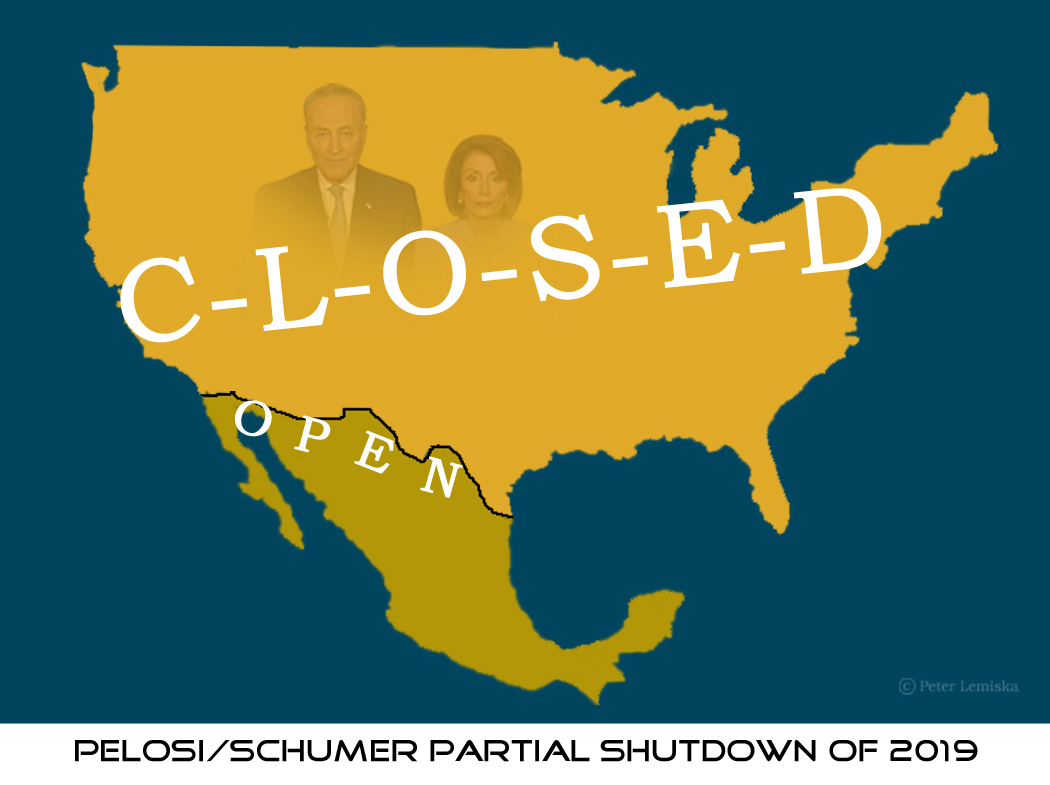 "How Pelosi won the shutdown battle." That was one of the Politico headlines following President Trump's announcement of an agreement reopening the government. But the article never mentioned that this is only a lull in the battle, a three-week suspension. Slate reported that Pelosi stood up to an “obstinate” president. It didn’t mention that she did it by being even more obstinate. But both sides are now claiming victory, and both remain undeterred. So, in three weeks it will likely all heat up again.

During his announcement, President Trump recognized the hardships suffered by the shutdown, and noted that several Democrats had quietly expressed a willingness to negotiate a real solution. He made it clear, however, that come February 15th, if Democrats still refuse reasonable funding for a border wall, either the government will shut down again, or he will fund the wall through other means.

Throughout the dispute, Nancy Pelosi remained strong and determined, emboldened not by a sense of righteousness, but by the polls. They indicate that most Americans hold the president responsible for shutting down the government. That perception began early in the controversy when President Trump recklessly took ownership of the looming shutdown in that meeting with Pelosi and Chuck Schumer. It was reinforced by the public’s natural tendency to hold the man at the top responsible when things go wrong, and it was certainly fortified by the liberal media, which routinely propagates the Democrats’ narrative.

But as Pelosi once famously noted when she was pushing Obamacare, emotion does tend to fog perception. Now, away from the fog of controversy, it’s abundantly clear who was responsible for the shutdown, who ended it, and who will be responsible if it resumes in February.

It turns out that even the president can’t compel federal employees to work without pay. That’s where the budget and Congress come in. It was that impasse between both parties that resulted in the shutdown. Either side could have ended it by capitulating to the other. With the polls on their side, Pelosi and Schumer seem determined to refuse funding for the wall no matter how long those workers may go without pay, no matter how long the government is shut down.

And while they had no shortage of tears for those furloughed federal workers, those jaunts to Hawaii and Puerto Rico, and that truncated trip to Brussels exposed an appalling indifference toward the shutdown. It was President Trump who remained in the White House, strongly suggesting to those apathetic globetrotters that the best way to resolve the problem and help those workers was to stay in Washington and negotiate a budget.

Throughout the dispute, Trump made several overtures to the Democrats, yet Pelosi and Schumer were, and apparently still are, unwilling to give an inch. Unless they can reach a negotiated compromise in three weeks, we’ll be back to square one, and voters may finally come to understand that Democrats care more about hurting President Trump than they do about border security or government shutdowns.

While President Trump sees this as a battle over our national sovereignty, Pelosi and Schumer are looking through the binoculars the wrong way. They have a much smaller view. Considering their sanctuary cities, their offers of free health care and other incentives for illegal aliens, and their unrelenting opposition to strong border security, they clearly want more illegal immigration. But they’re also fixated on embarrassing and damaging this president, denying him even one dollar for a border wall.

Maybe they believe those favorable polls are more dependable and resilient than the flimsy fencing protecting some parts of our border. But polls are just as unstable. More caravans, more illegal border crossings, and more Angel Families are inevitable, and that will only increase the demand for real border security. And if some future terrorist event is linked to an illegal border crossing, the polls will change dramatically.

Nancy Pelosi showed just how spiteful, unreasonable, and irrational she’s become when she attempted to hold the State of the Union Address hostage to her demands. That cynical, unprecedented gambit made her a hero to the left. Praising her actions during this whole ordeal, House Majority Whip Jim Clyburn (D-S.C.) said, "…I don't know what kind of nickname he (Trump) will find for Nancy, but 'Low Energy' won't be one of them." While her critics have, no doubt come up with a few nicknames of their own, the history books will likely record her as both the first woman Speaker of the House, and the most ruthless, self-serving politician to ever hold that position.

In the end, it wasn’t Nancy Pelosi’s obstinacy that brought a truce to the shutdown battle. Nor was it those endless crocodile tears she and the Democrats cried over the furloughed federal workers. It was Donald Trump’s reason and compassion that ended the stalemate. Now, if Democrats can stop gloating long enough to begin meaningful negotiations, they may be able to prevent a resumption of the shutdown or some unilateral action by the president.