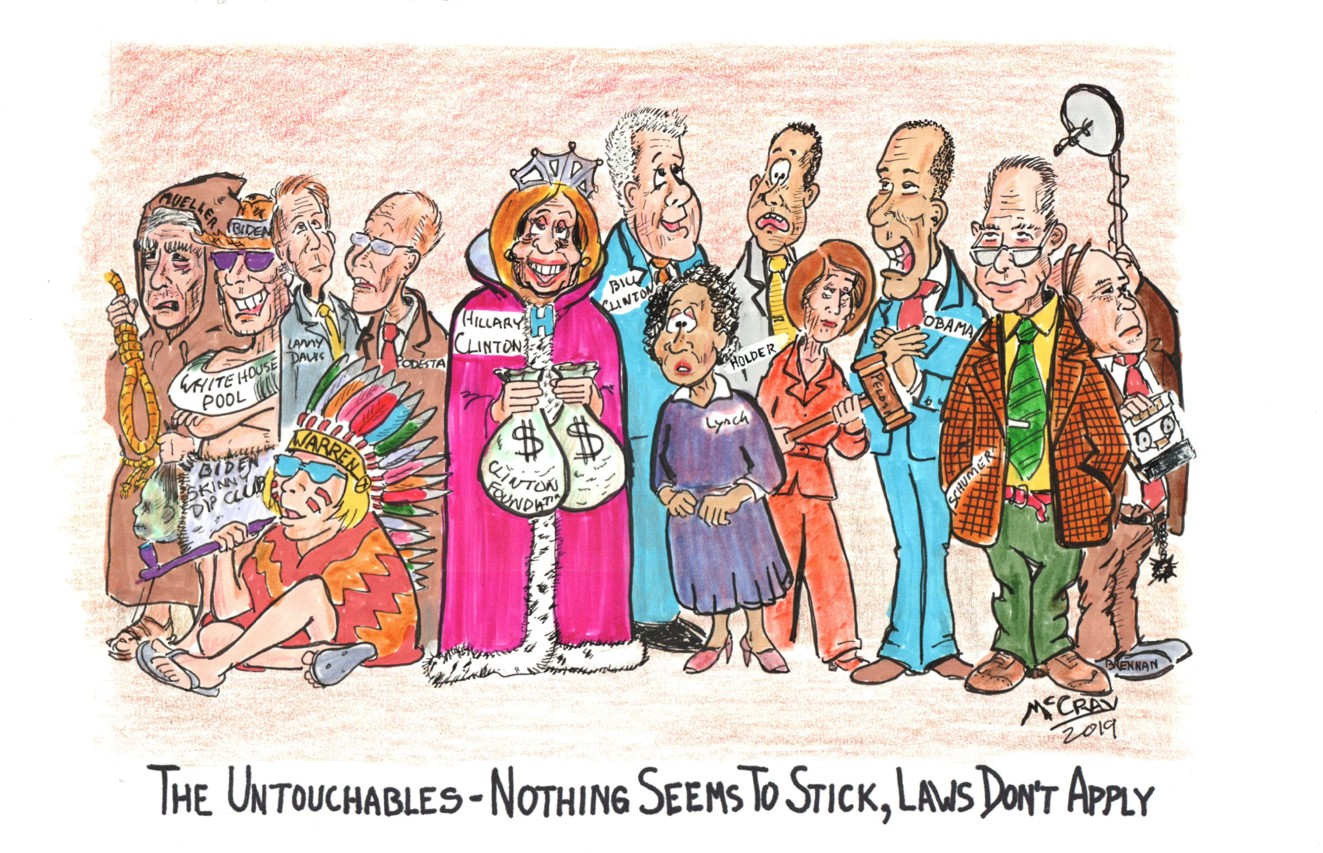 In the alternative universe that orbits around the Clintons and the establishment career political cronies of Washington, D.C., the rule of equal judicial law does not apply. Allegations of pay to play have dogged the Clintons for years, reaching its zenith during Hillary Clinton’s tenure as Secretary of State, along with numerous reports of other countries making sizable donations into the Clinton Foundation in order to receive preferential treatment with the Obama Administration. The biggest disaster from the viewpoint of national security was the Uranium One deal with the Russians, giving Russia a large portion of the United States' uranium - a deal that had to be signed off by then-President Obama and most of the Obama Administration’s state, security agencies, and justice department directors.

You would think such behavior would be front and center in the news, but it's not; the Press acts as an enabler by looking the other way or acting as a supporter. The press slobbers over all things Obama and Clinton but will snarl at anything that’s in the middle of the road or remotely to the right. The so-called Department of Justice also looks the other way, ignoring cover-ups, destruction of evidence, and has been involved in stall tactics that have stopped Republican congressional investigations in their tracks. The old crony establishment politicians from both parties are doing their best to protect each other by sweeping things under the rug. During the ongoing Russian Collusion witch hunt that is going after President Trump, the Department of Justice leadership ignored all things Clinton but aided the witch hunt to depose the establishment outsider Donald Trump.

This kind of corruption festers among career politicians whose entire focus is getting re-elected, and what’s in it for them; the only way to curtail this behavior is term limits. They come to the Congress deep in debt, owing their big donors and they leave years later as multi-millionaires. Some of these bought-and-paid-for denizens of the Washington Swamp have parked in Congress from 20-40 years, they live in the Washington D.C. area, and rarely visit the districts that they are supposed to represent. When we get a politician who is really trying to do the right thing, they are alienated, crushed, and finally spit out after a couple of terms by the establishment, good old boy politicians.

Buried underneath all of the corruption is the specter of socialism operating with the express purpose of establishing a socialist government in the U.S. Starting with former President Obama, who was raised in a family of communist revolutionaries and socialists. The former head of the C.I.A., Brennan supported communism and never should have had a security clearance. Then there is Hillary Clinton who embraced Saul Alinsky’s brand of Soviet Union Socialism as his college intern. And we can’t forget self-proclaimed socialist Senator Bernie Sanders, who is preaching socialist doctrine.

There are two camps of socialism vying for control of the U.S., those who seek international socialism that is controlled by the despots of the United Nations and those who want the single-party system of National Socialism in the U.S. They are able to operate virtually unhindered by corrupt politicians who could care less and are out to enrich themselves, enjoying all of the trappings of power that the office they squat in has to offer. The only way to stop this behavior is to inform the public of the dangers of left-wing socialism, expose and throw out the derelict and corrupt politicians, and vote in those who will honor the Constitution and the Bill of Rights.