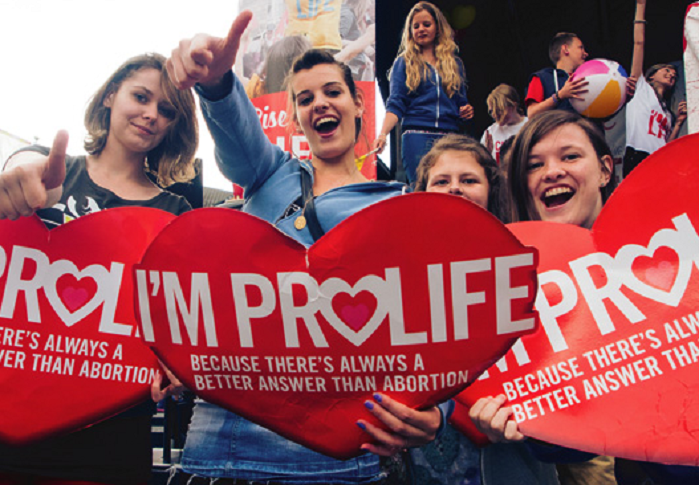 A verse in the Bible says, “They meant it for evil, but God meant it for good.” (Genesis 50:20) Who could have imagined that God would transform the following three attacks on the unborn into a blessing for the pro-life movement?

Fake news media faces a lawsuit for false reporting which caused the high-tech 'lynching' of the Covington high school students who attended the 2019 March for Life. (1) New York legislators gave a standing ovation to a law providing for killing babies on the date of birth. The governor of Virginia sought to legalize killing babies after birth. These 3 attacks have made Americans more aware of Democrats' culture of death and war on the unborn. Abortion is front and center on the international political stage.

Since the Roe v. Wade abortion on demand decision in 1973, more than 60 million babies have been killed. Pro-lifers are passionately energized to challenge Roe v. Wade. Praise God!

I was blown away that the majority of the estimated 300,000 who attended the 46th Annual March for Life were teens, pre-teens, and millennials. It was heartwarming and encouraging to see so many young people overflowing with compassion for the unborn. They were extremely excited, upbeat, and joyful about celebrating and defending babies. Many carried signs, “I am the pro-life generation.”

More pro-life than their parents, over 50% of millennials believe abortion should be illegal in all or most situations. (2)

Every time I lament that my fellow blacks insanely support Planned Parenthood which targets black babies to kill, I'm flooded with emails from whites. “Lloyd, let blacks know Planned Parenthood was founded by rabid racist Margaret Sanger to exterminate blacks.” Frustrated, I yell at my computer: “I've been telling blacks the truth about Sanger and Planned Parenthood for years to no avail!”

Unbelievably, over 20 black religious leaders gathered to ceremonially “bless” a new Planned Parenthood abortion chop-shop in Washington, D.C. (3) These supposed black shepherds are participating in the genocide of their own flocks. (4)

To stop the black on black genocide via abortion, Godly black ministers put up a billboard. “The most dangerous place for an African-American is in the womb.” Guess who had a cow and demanded that the billboard be removed? The answer is Rev. Al Sharpton, black civil rights organizations, and Democrats. (5)

Black civil rights leaders have betrayed their people and the legacy of Dr. Martin Luther King, Jr. Liberalism continues to devastate the lives of black Americans. And yet, black leaders keep preaching the destructive evil religion of Liberalism to their people. (6)

Planned Parenthood demands that women's rights include mothers killing their babies for whatever reason they deem necessary before or after birth. Here is a link to a brief video (7) of an abortion doctor explaining to Congress, in graphic detail, the procedure he used to perform second-trimester D&E abortions. Anyone not extremely disturbed by this video is spiritually ill.

President Trump, the most pro-life president in American history, signed legislation to empower states to defund Planned Parenthood. From day one of his presidency, Trump took action to defend the sanctity of life. He reinstated the Mexico City policy, stopping American foreign aid from going to organizations that promote or support abortion around the world.

In his speech to March for Life 2019, President Trump said, “Together we will work to save the lives of unborn children so that they have a chance to live and to love.” “Every child is a sacred gift from God.”

Trump signed a letter to Congress that if they send any legislation to his desk which weakens the protection of human life, he will veto it. (8)

Carrie Fischer was to be aborted in 1968, but the procedure failed. Born 6 months later, the failed abortion caused Carrie to be partially paralyzed and facially disfigured. As a little girl, 5-7 years old, Carrie had recurring dreams of a baby in a womb fighting for her life, trying to get away. Carrie said she felt the baby's pain and heard her screams.

At age 13, Carrie learned that the baby was her. A relative told Carrie her mother tried to abort her. When Carrie confronted her mom who raised her, she confessed and wept deeply. When the abortion failed, Carrie's mother said she was filled with regret and shame. Carrie and her mom are now best friends.

Remarkably, Carrie did not suffer brain damage as doctors predicted. Due to her facial disfigurement, Carrie endured horrific bullying by students and teachers. Carrie attempted suicide. Today, Carrie is happily married. She speaks around the country. Carrie said God saved her life to be a voice for the voiceless unborn. (9)

My friend, radio show host (Radio Patriot) Andrea Shea King shared her story with me. Pregnant and unwed at age 15, Andrea chose to give her son up for adoption rather than abortion. Forty-two years later, Andrea received a phone call from her son which led to a heartwarming reunion. Andrea met her daughter-in-law and her grand-kids. Her son is also a conservative like Andrea, his mom.

Andrea's story inspired me to write, perform, and record this song titled, “Hello Mom, It's Me.” Please enjoy the music video. (10)

Download the song, adding it to your playlist. Share it and encourage others to do the same, in defense of the sanctity of life. With abortion zealots outrageously seeking to legalize killing babies even after they are born, a compassionate pro-life song is needed more than ever.