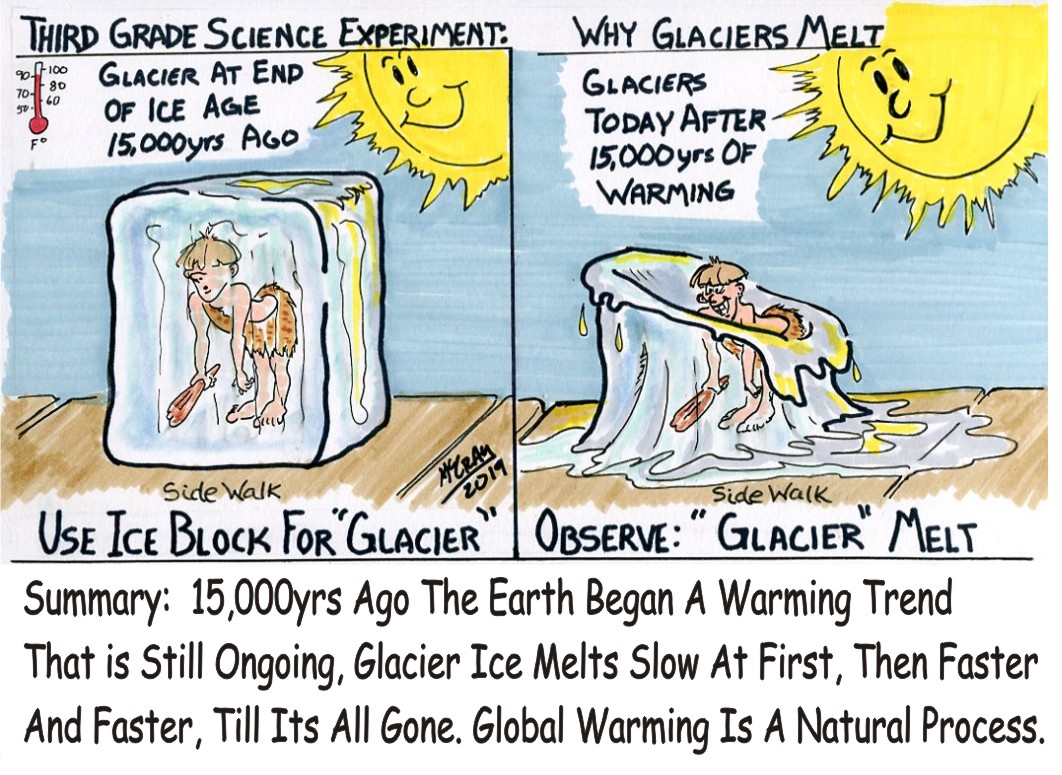 Good morning class, today we are going to discuss how the Ice Age ended. The earth entered a warming trend over 15,000 years ago which stopped the glaciers that covered most of the Northern Hemisphere, some over a mile thick, from continuing to grow. We will use a block of ice for our glacier and place it on the sidewalk on a warm day - it will not melt at first because it will be sustained by its own cold temperature. Then it will melt slowly at first, and then as the ice gets thinner it will melt faster and faster till it is gone. It is a natural cycle of the earth as it moves through its 26,000-year wobble that ended and was re-started on 12 December 2012.

At the end of the Ice Age, water levels on the earth were 400 feet lower than it is now, the water from the melting ice has caused the oceans to rise to today’s level. The release of all that water also affects the earth’s wobble, the mass of snow and ice is in the form of millions of tons of weight that is now on the move, through evaporation and runoff.  With the pressure from the weight of the ice no longer pressing down on the earth’s surface, the ground is rising as it rebounds to it pre-ice age levels. This can be seen in the Great Lakes as water levels change, causing many streams that fed the Lakes to now flow back to their source as the lake bottoms rise.

This is the class that Global-Warming Guru Al Gore and his like-minded friends skipped or are deliberately ignoring. Now, why would the great carnival barker, Al Gore and his cronies keep beating this drum? Well, it’s all about the money and power. If you control the direction of a government, you are controlling that government, those pushing Global Warming (aka Climate Change) around the world want to center that control in the hands of the socialist despots that run the United Nations.

For the countries that have signed on to the Kyoto Climate Agreement, their primary goal is to put the burden and cost on the taxpayers of the United States, while ignoring and giving a pass to world polluters like China, India, and Russia. Regardless of the fact the United States has been a world leader in clean energy, cleaning up pollution by putting scrubbing units on industrial smokestacks and CAFE standards for automobile emissions. Anyone who ever spent time in Los Angeles, Pittsburgh, and other polluted areas in the U.S. back in the 1950s to 1980s remembers the massive air pollution, the smog that existed then, where now you have cleaner air and can breathe without needing a respirator.

For years it has been the ‘SCAM’ of Global Warming, and carbon footprints were the fault of everyone and everything, but the predicted disasters failed to materialize. Though the hokey science guys decided to change the name to "Climate Change," it’s still the same big scam created by the control freaks in the United Nations in an attempt to control the United States. Their basic message was and is for the U.S. to surrender our national sovereignty to the United Nations in order to save the world.