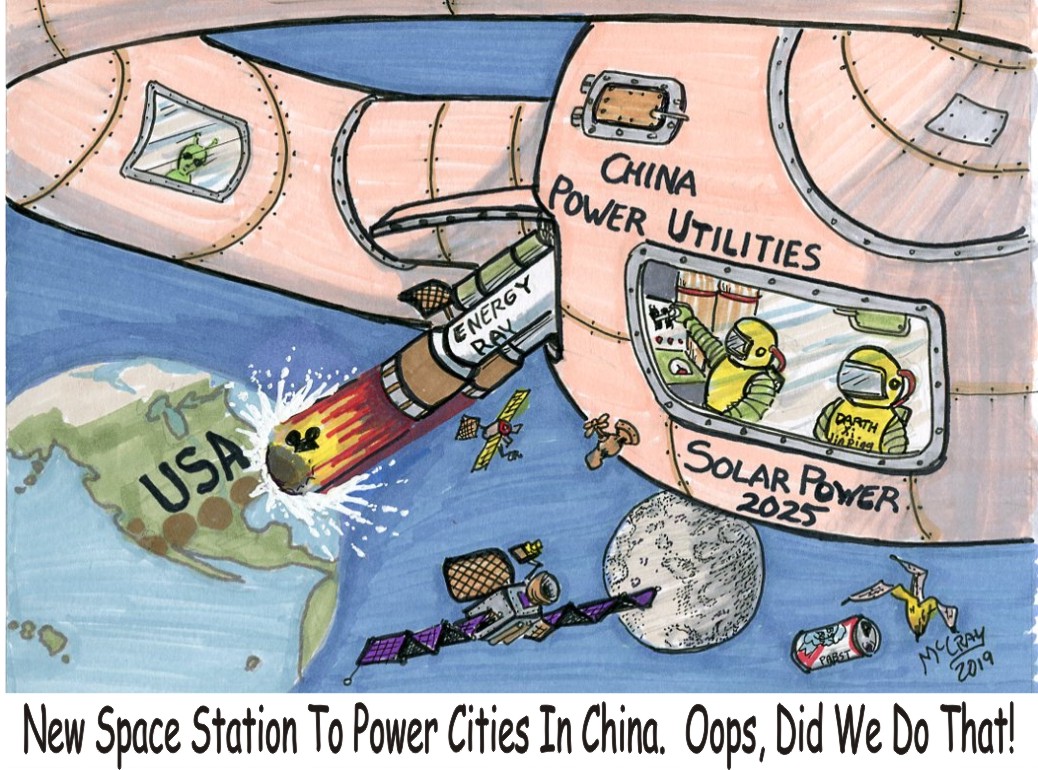 The Empire Strikes? China has announced that they are building a solar space station to provide an inexhaustible supply of power that will be beamed from space to a base station on earth. The China Academy of Space Technology Corporation spokesman, Pang Zhihao said that working test platforms are supposed to be in space by 2021 and 2025. A full-size station that is twice as heavy as the International Space Station is planned for 2030 orbiting at an altitude of 22,350 miles.

The type of energy beam has not been revealed, the station is supposed to be at the Mega-Watt level converting solar to a possible steerable radio frequency, microwave, or laser beam. This is where things get a little hairy, in each case concentrated energy has to be collimated into a beam and focused on a ground target for maximum efficiency.

An energy beam has to have enough power to punch through the particulate matter that is suspended in the atmosphere - dust, pollen, water, and ice crystals, not to mention air pollution, and still have enough energy left at a useable level.

The microwaves and RF beams are frequency radiation sources, they will produce heat in the target area, capable of cooking the human body from the inside out. Lasers work by the stimulation of electrons that produce a focused light of a single frequency, the strength of which depends on the amplitude and pulse width for the signal which is measured in watt/seconds (Joules).

The High Power Lasers that are in general use today are chemical and CO2 gas systems that can punch holes in a target. All lasers are very susceptible to atmospheric contamination that will attenuate the strength of the beam. The laser systems used in military aircraft which include the range/designators and destructive types are affected by debris in the atmosphere where the effective range is reduced as the aircraft gets closer to the ground. The higher the altitude the longer the range, in the space environment the range is almost unlimited with minimum energy loss.

Even if the intent of the Chinese Solar Station is for the public good you can bet the Chinese Military is involved due to the potential military application as a weapon. This sets up the threat of a high energy beam that can be directed against ground targets or space targets, with the capability of literally cooking an area.  Having a space-mounted weapon is the same as having the high ground in any battle configuration which forces the enemy to be the attacker who will be disadvantaged and will take the most losses. Another advantage of a space-mounted system is the efficiency of the power supplies and converters. In the cold temperatures of space, the efficiency of electronics and related systems is increased and heat exchangers are easily cooled and maintained, making such systems a realistic endeavor.

President Ronald Reagan foresaw this in the 1980s when he called for a Space Initiative that was ridiculed by opponents and in the press as "Reagan’s Star Wars." Maybe those who laughed at Reagan then aren’t laughing now.