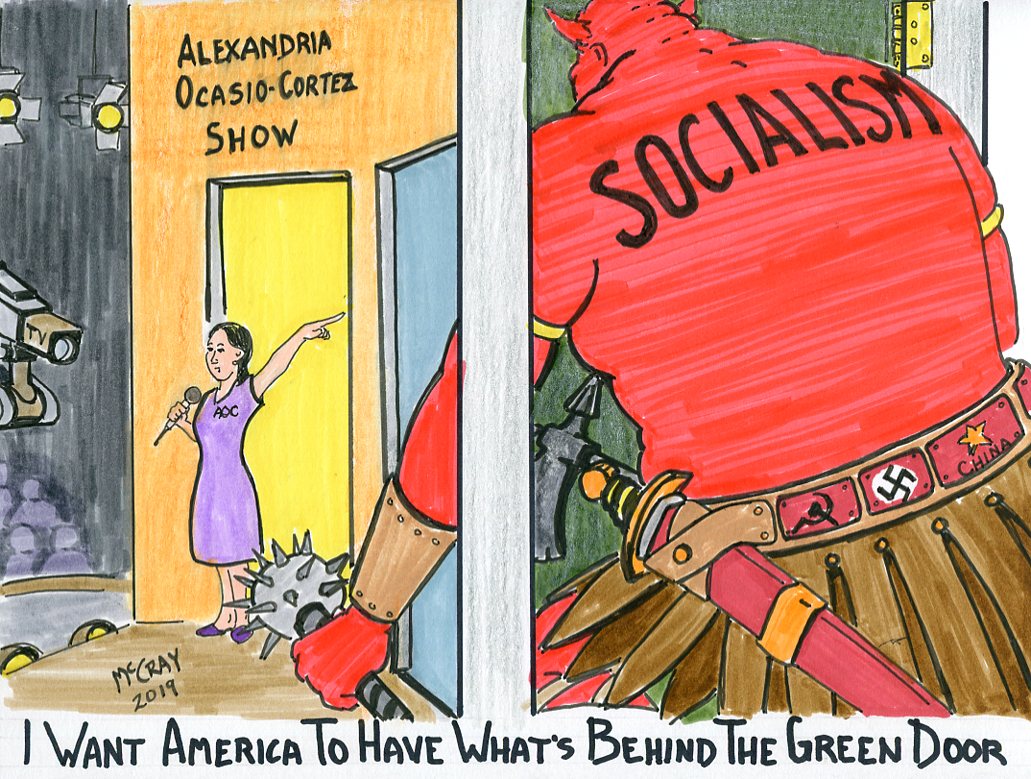 Freshly minted U.S. Congresswoman from New York City, Alexandria Ocasio-Cortez (AOC) has turned the so-called Democrat Party on its ear. Lines are being drawn and lists of enemies are being created as the old left-wing guard led by Nancy Pelosi face off with the new socialist radicals lead by Ocasio-Cortez.

A disciple of Global Warming, Guru Al Gore has been screaming for years that the world will end in 12 years if we don’t take drastic measures regarding Climate Change. To save the world we must adopt this dingbat idea from Ms. Ocasio-Cortez, called the Green New Deal; she seems to have the idea that all it takes is a snap of the fingers and poof, you have changed the greatest economic engine of the world into a rusty broken-down wreck. The far left have dusted off all their 1960s wacko ideas, banning fossil fuels, air-polluting machines, airplanes, and cars - all carbon-producing machines must be destroyed. What’s next, the return of the flower children, living in mud floor communes, fringe vests, paisley shirts, and headbands - yuk.

Today’s radicals are pushing socialism as if it is something new, and not the same old destructive socialist garbage of the past. The Union of Soviet Socialist Republic's (USSR 1917-1991) primary goal was to spread their brand of hardcore socialism worldwide. First, the intelligence service of the NKVD which was retooled later into the KGB, inserted agents into countries with Democratically-elected governments to spread their socialist ideology. They were aided and abetted by home-grown socialists like Hillary Clinton’s mentor Saul Alinsky and Barack Obama’s mentor Frank Marshall Davis.

We are seeing the results of that effort with people who are indoctrinated with socialism. The worst offenders for spreading this garbage are college professors and staff, these great bubble head intellectuals have spent most of their lives on a school campus and never worked a real job. They think all of the pie in the sky ideas are great and their opinion is the only one that counts. Now you have their students believing they are on some great crusade and will not listen to reason, and if someone disagrees they are attacked. Much of what we are seeing is a repeat of what happened in Germany in the 1920-30s as Hitler came to power as head of the National Socialist German Workers Party (NAZI Party).

For socialism to win in the United States our two-party system has to be destroyed and replaced with a massive all-controlling one-party governmental system. Those pushing for an international socialist world want the United Nations as the ruling body, and those who want the single-party socialist control of the U.S.A. are National Socialist. Both are dangerous - all the rights we have under the Constitution and the Bill of Rights would be dumped into the shredder. This is why the left is constantly trying to undermine the 2nd Amendment and criminalize gun ownership - they have to disarm the public in order to establish a police state.

The Party of Democrats no longer exists, it has been replaced by self-destructive socialists that want to destroy the form of government that gives them all of their rights and benefits. If they succeed, there will be no objections, no protest parades, no discussions or debates - such protest activities will certainly guarantee arrest and prison. If you need a modern example of socialism, take a good look at what Chavez and Maduro have done to Venezuela. They gave up their right to firearms and became a military dictatorship, now you have a collapsed economy, and people are fleeing the country in order to survive.

The only way to tamp down socialism is by educating the public, and the quickest way is public service announcements similar to the schoolhouse rock shorts that were aired during children’s TV programs years ago. It needs to be forced back into the education system, where it will be fought by the left wing in the education system. The classes of Americanism vs Communism that were purged by the left need to be re-started in some form to counter the Political Correctness and socialist slide of the past three decades.

A dumbed down population is easy to control and turn into the willing lynch mob; they are the “useful idiots” that the founder of the USSR, Vladimir Lenin, spoke of - just point them in the direction you want and then exploit the chaos. Socialism thrives in the environment of ignorance with the promises of lollipops and teddy bears, those who are educated to its inherent failures and destructiveness will not be manipulated by Socialism.