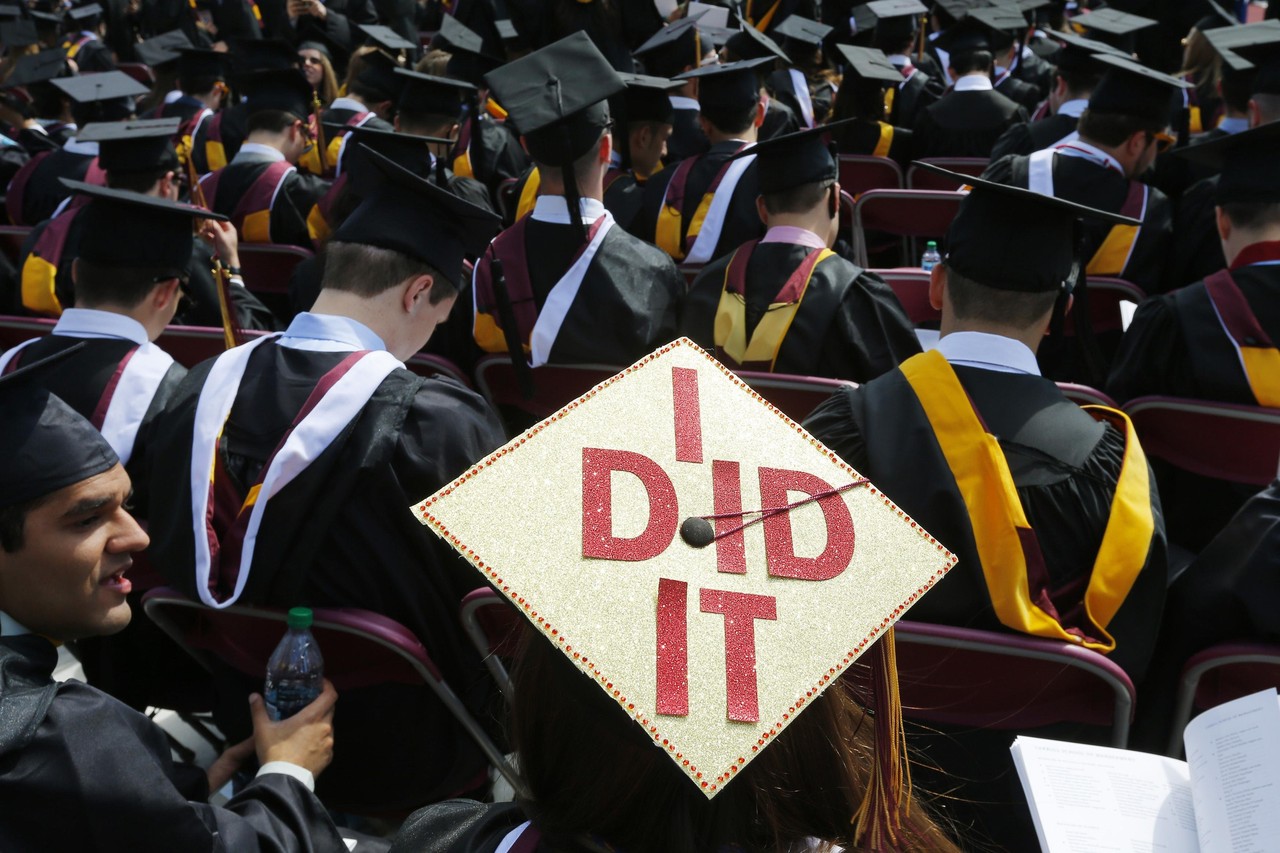 The media are all in a dither after the revelation Monday that the Justice Department has accused fifty wealthy parents (including two famous movie stars) of paying huge bribes to get lackluster children accepted at elite universities. Such parents are desperate since the average college freshman reads at a seventh-grade level. While a committed student could overcome that disadvantage, those kids interested in getting away from home, wanting their freedom, anticipating wild parties, all night beer binges, etc., have little chance of academic success in a rigorous institution. With the abominable record of secular “elite” colleges, why would any sane person bribe officials to enroll in what have become ignorance factories?

It was common when I returned home from university or seminary to have family and friends ask, “What courses are you taking this semester?” I would reply, “Abnormal Psychology” or “Western Civilization” or “New Testament Greek,” or “English Literature in the Middle Ages” and many other classes that required an enormous amount of time, thought, and tuition. When that question is asked today of young students, the answers will shock, anger, and frustrate any parent or thinking taxpayer.

It’s bad enough for students at Harvard, Duke, Princeton, and similar universities to enroll in frivolous courses at a time when college costs are alarmingly high, but another thing altogether when blatant liberal bias appears in classrooms at taxpayer-subsidized universities. Parents are paying astronomical tuition to have their kids brainwashed by leftists and some parents are bribing officials to guarantee a seat at Elite U.

Read and weep what you help finance and what some parents have paid up to $500,000 to get a kid accepted by Yale, University of California, Georgetown University, Stanford, and others. Because so many students cannot do the work, many universities have dumbed down their curriculum or eliminated challenging courses altogether. The Washington Post published an article headed, “A history degree without studying U.S. history? It’s possible at top colleges like Harvard, Yale, and Stanford.” Other institutions of “higher learning” will graduate students without a single math course! At the University of Georgia, a Ph.D. candidate in creative writing can submit poems instead of a dissertation. And at the University of Michigan, you can get a Ph.D. in literature without reading Shakespeare.

It is shocking to know that today's students have been exposed to “Buffyology” (the study of “Buffy the Vampire Slayer”), Elvish (the language of “Lord of the Rings”), “Harry Potter” and other TV shows and movies. If my children had taken such classes, I would have become apoplectic to know that some of my money was funding such piffle. Moreover, I would have stopped payment on any recently sent check to pay for such trash.

Students, not understanding that they are supposed to be preparing for their future, sit through such garbage as "How to Watch Television" at Montclair State University and "How to Get Dressed," a freshman seminar at Princeton University. What students really need are classes on how to read, spell, compute, and how to work and make a life as well as a living.

Students at Harvard University can take “Feminist Biblical Interpretation,” a class that will concentrate on "the significance of feminist Hermeneutics for contemporary theological reflection and education for ministry." Wonder how I made it in the ministry without that course.

At Carnegie Mellon University, students can study “Sex and Death,” a course that addresses the question of "whether we need to liberate death now that (maybe) we have figured sex out." Obviously, they haven’t figured English out!

Women's Studies students at Bowdoin can take “Music and Gender,” questioning if Beethoven’s Symphony 9 in D minor is a model for the process of rape! Wow, I would never have thought that was a possibility and neither would any normal person.

Students at Syracuse University can study “Gay and Lesbian Caribbean Literature” and will read "Caribbean poetry and short stories in homosexual literature."

Georgetown students can enroll in “The Bible and Horror.” The class description states that the Bible "can be a scary book" and that it "often reads more like horror than religious literature." I missed that in seminary.

Literature students at Cornell University can take “Bodies Politic: Queer Theory and Literature of the Body.”

Middlebury College offers “Images of Blackness and Whiteness in American Literature” where students will study "culturally-coded images both shape and are shaped by American attitudes about racial identity."

Students at Occidental College in California look into “The Unbearable Whiteness of Barbie: Race and Popular Culture in the United States.” They will explore “which scientific racism has been put to use in the making of Barbie [and] to an interpretation of the film The Matrix as a Marxist critique of capitalism.”

Occidental College offers a course in “Stupidity,” which compares the American presidency to Beavis and Butthead. Occidental scores again in the realm of ridiculous with “Blackness,” and they really rang the bell with “The Phallus.”

At John Hopkins University, students in the “Sex, Drugs, and Rock ‘n’ Roll in Ancient Egypt” class look at slideshows of women in ancient Egypt “vomiting on each other,” “having intercourse,” and “fixing their hair.”

Harvard University’s “Marxist Concepts of Racism” looks at “the role of capitalist development and expansion in creating racial inequality.”

Students at the University of California-Los Angeles will be taught what it means to be a lesbian. The “Psychology of the Lesbian Experience” reviews “various aspects of the lesbian experience.”

Brown University’s “Black Lavender: A Study of Black Gay & Lesbian Plays and Dramatic Construction in the American Theatre” addresses the “identities and issues of Black gay men and lesbians, and offer[s] various points of view from within and without the Black gay and lesbian artistic communities.”

Students enrolled in the University of Michigan’s “Topics in Literary Studies: Ancient Greek/Modern Gay Sexuality” will read a “wide selection of ancient Greek (and a few Roman) texts that deal with same-sex love, desire, gender dissidence, and sexual behavior.”

Students at Dartmouth College, have “Lesbian, Gay, Bisexual, and Transgender Studies: Queer Marriage, Hate Crimes, and Will and Grace” for their learning. They will study contemporary issues in LGBT studies. Dartmouth also offers, “Religion: Beyond God the Father:” an introduction to gender and religion studies helping to create a “feminist philosophy of religion.”

Then the University of California-Los Angeles’ class on “Queer Musicology” should be exciting but not as stirring as the University of Washington’s “Border Crossings, Borderlands: Transnational Feminist Perspectives on Immigration.”

The University of Florida offers “Black Hair Politics” providing an “examination of the history, sociology, psychology, and economics of Black hair. Students will explore the textures, styles, and meanings of Black hair as they relate to identity and power in society.”

The University of South Carolina offers “Ecofeminism,” a class that is “an exploration of the connections between oppression of women and oppression of nature.”

Yale University provides its Ivy League students “Transgender Cultural Production,” an introduction to trans-studies that will “focus on transfeminist cultural production in the United States and Canada.”

Montclair State University is supposed to be New Jersey’s best public university and it offers the course “Queer Identities in a Transforming World: The Trouble with Normal” as part of its “Gay, Lesbian, Bisexual, Transgender, Queer Studies (GLQS) program for 2019.

It is incredible to see the way course offerings at these prestigious schools can be so crudely and uncritically filled with the cultural assumptions and stereotypes from the left. With so much emphasis on sexism, racism, and Marxism indoctrination, I don’t see how students find time to protest everything Trump does and says, have panty raids, and attend all-night beer parties.

The above information is astounding when one realizes that 40 percent of college students need remedial work in math and English yet they are exposed to such trash! A generation has been robbed by inept, incompetent, indecent educational institutions.

That would get their attention - although most leftists are slow learners.