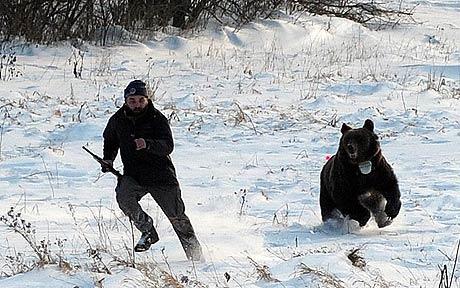 A married couple was vacationing in Yosemite Park in the United States. The wife expressed her concern about camping because of bears and said she would feel more comfortable in a motel. The husband said that he would like to camp outside in the woods. To calm her concerns, he suggested they talk to the park ranger to see what the likelihood of a bear encounter would be.

“Well, we haven’t seen any grizzlies in this area so far this year, or black bears, for that matter,” said the ranger. The wife shrieked, “There are TWO types of bears out here? How can you tell the difference? Which one is more dangerous?”

The ranger replied, “Well, that is easy. If a bear chases you up a tree and it comes up after you, it’s a black bear. If it shakes the tree until you fall out, it’s a grizzly.” The motel room was quite nice that night. I agree with the wife. Enough said.

In this case, common sense won out and they may have avoided a difficult situation. But sometimes difficult situations are hard to avoid. In that case, may I suggest what I call the Top Ten Things to Do - and Top Ten Things Not to Do - in a Difficult Situation. In other words, if a bear is shaking the tree of your life, these might just help you to get a better perspective and make better decisions.

Top Ten Things Not to Do:
10) Let fear and unbelief embrace you causing you to magnify the problem. So far, you’ve survived 100% of your worst days.
9) Lose Hope. Sometimes when you're in a dark place and you think you're buried - maybe you’ve been planted.
8) Get into self-pity and blame shifting.
7) Isolate or insulate yourself.
6) Get stuck in an emotional tar baby.
5) Self-talk yourself into losing and giving up. Be careful how you are talking to yourself because you’re listening.
4) Lose the big picture and fail to see things from God’s perspective.
3) Forget God’s promises or His word in the Bible.
2) Forget who you are and Whose you are.
1) Force God to accept your solution as final.

Top Ten Things to Do:
10) Magnify the Lord and look up.
9) Get God’s Perspective from the Bible in order to become proactive.
8) Get a team or group of friends around you to support you.
7) Get spiritual backbone– winners are ex-losers who just got mad.
6) Get some hope and faith from the Bible.
5) Remember God’s promises and God’s grace. Grace recognizes consequences but refuses abandonment.
4) Tap into God’s resources through the power of the Holy Spirit.
3) Choose to be teachable, not offended. Wisdom teeth are what you get when you bite off more than you can chew.
2) Don’t let the sound of your own wheels (emotions) drive you crazy. It’s not the load that breaks you down. It’s the way you’re carrying it.
1) Look down on the situation from an up position. David didn’t defeat Goliath because of the way he fought, he defeated his giant by the way he thought.

I hope this helps you today. As Elvis Presley once said, “When things go wrong, don’t go with them.” Besides that, you don’t want to go running around with a bear behind. I hope you caught the previous sentence. It could make your whole day.