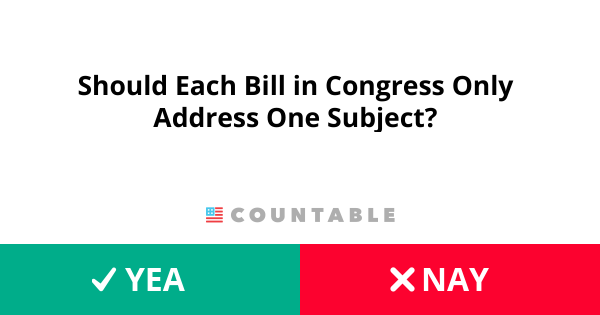 Have you ever wondered why bills written by Congress and the Senate are often so long? Many are hundreds or thousands of pages long. Most are not even read before being voted on. And even you could struggle through the length, you will need a legal interpreter to be able to understand what you just read. These bills are so cumbersome, so complicated, that they’re impossible to understand, much less vote on.

But vote on these bills they do. And it’s doubtful that the vast majority of politicians have any idea of what they are voting on and passing.

Worse, I no longer think that it even matters. The majority of Democrats and Republicans don’t care what is in any given piece of legislation as long as even a portion of it somehow advances their agenda. And it’s usually a tiny few paragraphs or so that are hidden among the mountain of pages.

The only exceptions to this statement are the few constitutional conservatives who continually hold on to the Originalist view of the rule of law. But that number is too few to have an affect on most outcomes.

Now I personally don’t know the nuts and bolts of how business is conducted in either chamber, but I think it a safe bet to guess that individual members are issued marching orders from leadership on how to vote and brief talking points as to why, if they were ever asked to explain their vote.

It may not even be that complicated. Many times, it’s all in the name.

Take for example, the “Violence Against Women Act,” (VAWA) originally passed in 1994.

Who would vote against VAWA? Especially in our 'Woke' society. If you vote no, you’re voting for violence against women. And so it passes on its name alone. Never you mind what’s in it.

What’s in it, as is usually the case with Nanny legislation, is a one-size-fits-all bill that takes no quarter and gives no one any discretion to think for themselves.

But it will most assuredly have, as mentioned above, at least one or two new programs and departments, adding to the governments already massive deficit and debt.

The VAWA already has an Office on Violence Against Women (OVW), and a national domestic violence hotline.

Now anyone in their right mind abhors domestic violence, and both these may be needed, but these matters must be left to States and localities. The federal government can never be involved in such things. Whether it sounds or feels good is immaterial. The feds have no constitutional authority to be involved.

But in Washington, a lack of constitutional authority falls on deaf ears. Those who wish to expand the footprint of the federal government simply do as they did in the early 1990s in order to pass the original VAWA.

Politicians brought forth survivors who “delivered stirring testimony to the Senate Judiciary Committee.”

It was signed into law by Bill Clinton in 1994. And once in place, it will not ever go away. No one will have the courage to demand its repeal on constitutional grounds.

Now in this current reauthorization go around, the government has seen fit to expand its reach even further. “House Democrats have added new gun control provisions to VAWA, “expanding the category of individuals who could have their Second Amendment rights infringed to include things that aren’t felonies and aren’t considered domestic violence.”

And displaying their Woke/Identity politics, “Democrats also added protections for men who identify as women, requiring shelters and prisons to house transgender inmates according to how they identify themselves, not by their biological sex. Conservatives oppose this transgender ideology, which denies biological reality and endangers actual women.” And don’t forget common sense.

Ever wonder how the federal government just keeps growing? This is how you expand the depth and breadth and reach of the centralized federal government. Just keep cramming in more crap to every bill, whether it’s germane or not.

Next up: a reparations rider to the next NASA reauthorization.