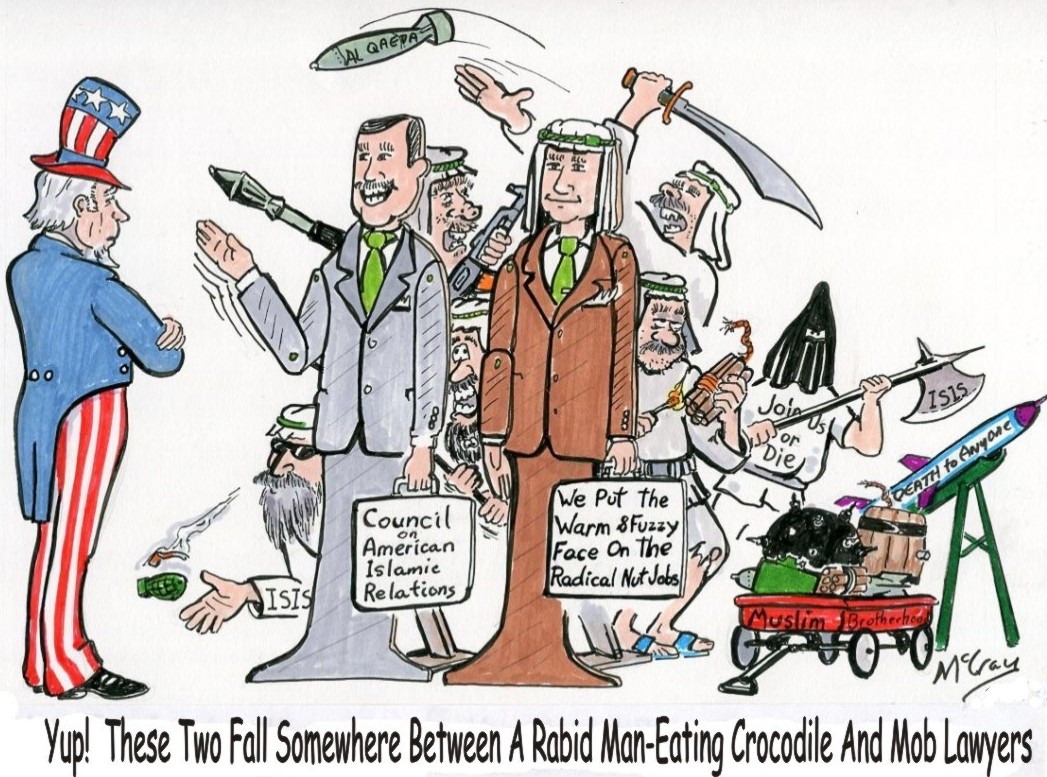 Congress Rep. Ilhan Omar (D-MN) in her speech last March, before CAIR (Council on American Islamic Relations), referred to the attack on the World Trade Center on 11 Sept. 2001, as “some people did something.” Then she made the statement that CAIR was created to deal with the backlash against Muslims after the 11 Sept 2001 attack. Sorry, Ms. Omar, CAIR has been in business since 1994, long before the 911 attack, CAIR was named as an unindicted co-conspirator in funding HAMAS in 2007 by the United States. The United Arab Emirates placed the U.S.-based CAIR group on its list of terrorist organizations in November 2014.

CAIR is nothing more than a public relations front for the terrorist organization, the Muslim Brotherhood. They put the warm and fuzzy face on a bunch of terrorists, much in the same manner as Shin Fein was a front for the Irish Republican Army that has terrorized Northern Ireland for decades. The lovely organizations of Al Qaeda and Isis are spinoffs of the Muslim Brotherhood. Ms. Omar wants to paint anyone who has a problem with Radical Jihadi butchers as a racist and a bigot; well you get the idea, she’s wanting to play the victim. For the people who rammed the planes into the World Trade Center, the Pentagon, and into the Pennsylvania countryside, they were Jihadi’s continuing a war against the west that started in 630 AD.

The origins of the radical’s Jihad is rooted in the ancient tribal raids of the Arabs over the regions of the middle-east. The actual seizure of territory for a Caliphate, a religious empire, began under the banner of the religious warlord Muhammad after capturing Mecca in 630 AD. The efforts of the Muslim’s seizure of territory began in earnest after Muhammad’s death in 632 AD, under Khalid bin al-Walid who put those who did not submit to the sword. It is a story of condescending arrogance, death, conquest, sex, pillaged wealth, and enslaving the local populations. Many who participated in these attacks were seeking riches, and slaves were afraid of going to hell, till Muhammad gave them an out with a promise that if they died while on Jihad they would go to the big bordello in the sky, where they would each receive food, drink, riches, and the carnal pleasures of 72 Houris, who are well-endowed women with special talents.

The radical Jihadi have no tolerance for anyone who does not believe as they do, they hold secular Muslims who are not interested in going on Jihad in lower esteem than the people of other religions. Their punishment is to be tortured like no other sinful human in hell. Those who don’t believe have a choice - convert to Islam, die fighting, or pay a tribute tax called dhimmis to keep their religion and property.

The flag of Isis is nothing new, it is a facsimile of the flag carried by Khalid bin al-Walid from 634 AD onward. Those of us in the west view all of these events with a big yawn, it’s ancient history. By contrast, the Muslim world views these events as current history, and most of the speeches and writings that have come from the Religious Warlords of Iran (Persia) and many other Muslim leaders will reference events and leaders of Islam’s past while discussing modern events.

Congresswoman Ms. Ilhan Omar’s (D-MN) demeaning anti-Semitic comments and statements regarding 9/11 raises the question, "Whom is she representing?" - for it doesn’t look like it’s the United States.

For those who want to know what the west is facing should read an excellent reference book by Raymond Ibrahim, titled: “Sword and Scimitar” (2018). It should be mandatory reading for all students and especially politicians, as it covers 14 centuries of war between Islam and the West.