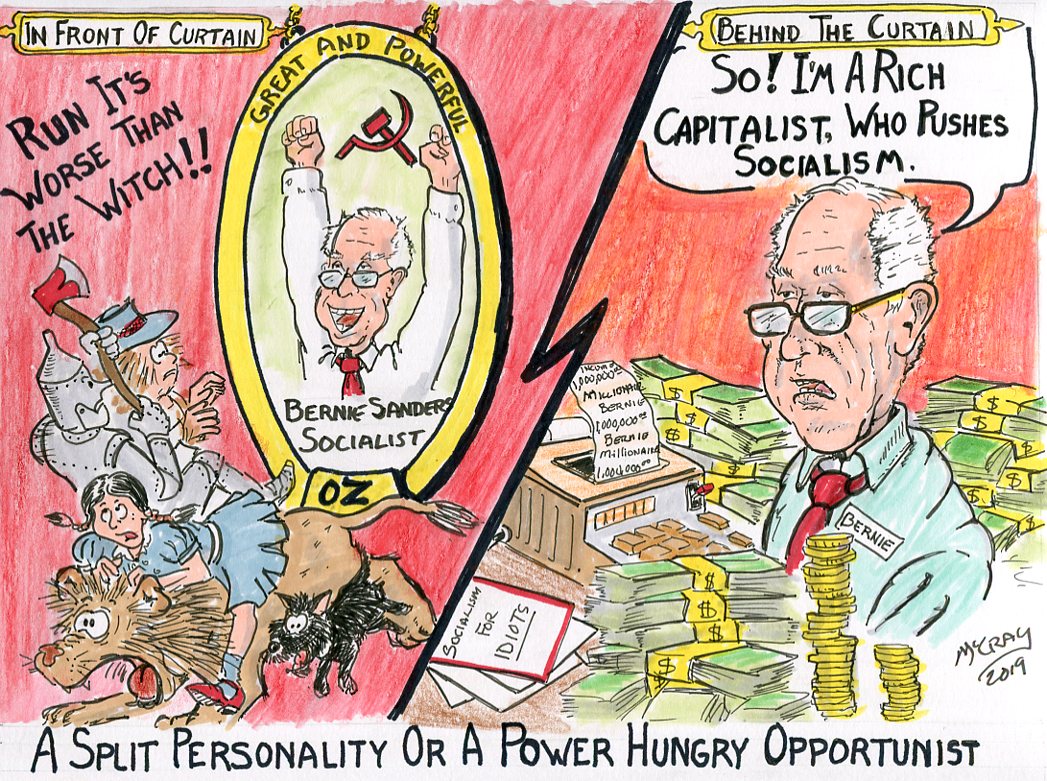 Senator Bernie Sanders, a holdover from the days of Soviet Socialist Russia indoctrination and a long time promoter of Socialism for a system of government for the United States, recently released 10 years of his tax returns and it shows that Bernie Sanders is actually a rich capitalist millionaire. But isn’t Bernie a sworn socialist, a follower of an equalitarian socialist society, where everyone is equal in all ways? The question is how can he be both - is it a case of a split personality or a greedy, power-hungry opportunist selling a bill of goods? It seems Bernie is saying "Do as I say and not as I do."

This conundrum is nothing new with promoters of socialism; in many cases, it is the cause celeb for the very wealthy who have made their fortune as a capitalist. They seem to want to shut down the very system that allowed them to make money. For some, it’s nothing more than the arrogance of their thinking they are smarter than anyone else on the planet and they will tell the stupid people how to live. For others it’s all about the power and control; socialism is a method of fooling a population into believing they will receive all kinds of free stuff by taking wealth away from others. The wealthy dictators of socialism will not give up their wealth, they will increase their wealth while they control yours and you will pay more in taxes and have no rights.

The Constitution of the United States and the Bill of Rights places the power of government in the hands of the people through the form of elected Representative Government. As long as the politicians who have been elected to their offices at the local, state and national level hold true to their oath of office, an insurmountable barrier to socialism exist. Unfortunately, many of the elected officials are working in their own interest and undermining our Representative Government by pushing for a Socialist form of government. This is leaving the back door open for bad actors, who fund these corrupt politicians and use the rights we have against our form of government.

The Socialist-run, so-called 'Democrat' Party is now fielding 20 candidates for the 2020 Presidential election, who are jumping on the bandwagon of the far left. Most are promising the great welfare state pie in the sky of everything is free and nobody works, if we all go for socialism. Free schooling, free medical care, and you will be protected by the all-powerful Big Brother Government as long as you surrender your 2nd Amendment Right - all of these promises are just for votes. As most people know, nothing is free; those paying the taxes will be paying more, and if the Socialists take away the 2nd Amendment, you can kiss the rest of your rights goodbye. Then the United States can join the long list of Socialist failures when we auger in like Venezuela and Cuba.

The people who foolishly push Socialism need to answer one question. Why have all of the people who have escaped from Socialist and Communist totalitarian countries run to the United States? Answer: They do so because the Constitution, the Bill of Rights, and our representative government have made us the freest country in the history of the world, and the escapees know that socialism is enslavement.