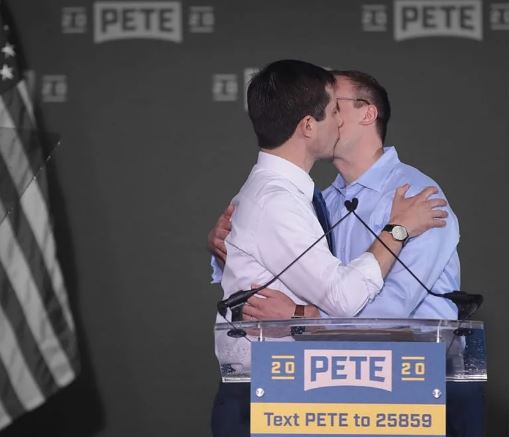 Mayor Pete Buttigieg, the media, and academia are all fouled up about what perversion is! Since the mayor is an admitted homosexual, with a “husband” no less, he obviously feels he must justify his choice of walking in the dark world of perversion. And make no mistake, homosexuality is perversion. If not, then all religions and denominations down through the ages (until recently) have been wrong.

A serious person will not try to overturn civilization’s morals, manners, and mores of thousands of years without very thoughtful consideration.

Evidently, Pete cannot be trusted to make decisions since he chose a degrading, dangerous, even deadly lifestyle. Such a person should not be in charge of the national budget, foreign policy, or have his finger on 'the button.'

People who are soft on perversion don’t know the difference between right and wrong, up and down, black and white, good and bad, or normal and abnormal. The Hebrew prophet Amos commanded us to “Hate the evil and love the good.” (We are commanded to hate evil but never persons.) However, most people relegate Amos to the ash heap and suggest that what is evil for one person may be good for another. Afraid not. While there can be some honest disagreement about some things, when God speaks about an issue that settles it. God has spoken clearly about perversion. And that settles it!

Most homosexuals, rather than deal with our objections and criticisms, resort to the embarrassing and humiliating ploy of screaming “hate,” “bigotry,” and “intolerance.” That is much easier than speaking to the real issue. Even if some “traditional marriage” proponents are haters, that does not mean homosexuality is right and good for society.

Pete has aggressively gone after Vice President Pence because Pence believes in “traditional marriage.” I wonder how he would respond if Pence said, “I believe in the biblical truth that homosexuality is perversion and is an abomination to God and man.” You see, that is exactly what Pence and others are really saying when they speak of “traditional marriage” and that is more pleasant to hear.

Pete, rather than accepting responsibility of willingly living a homosexual lifestyle, tried to blame his sexual choice on God. He said to Pence, “Your quarrel is with my Creator.”  No, it is not the Creator’s fault because Christ said in Matthew 19:4-5, “Have ye not read, that he which made them at the beginning made them male and female, And said, For this cause shall a man leave father and mother, and shall cleave to his wife: and they twain shall be one flesh?”

Obviously, Pete chose not to obey his Creator’s command and plan for the human race. The mayor has that legal right but it is folly for him to suggest that his lifestyle choice is moral or to suggest it is wrong for decent people to question his wisdom or to even bring up the issue.

Just because the mayor has desires for his “husband” does not mean he was created homosexual and because Pete reacts to that desire does not make him a homosexual. It only means he is a stupid sinner, like all of us. Practicing homosexuals are people who were born heterosexual and are rebelling against the God-ordained plan for his or her life. "Homosexual" is simply a term given to heterosexuals who rebel against God’s plan for mankind.

Absent accidental birth defects, a person is born with male or female equipment and the use of such equipment is normal, obvious, and desirable under circumstances planned by a gracious God. To use that “equipment” wrongly (which is abnormal) is detrimental to the individuals involved and a threat to God’s plan for society. However, sin-cursed mankind always seeks to get out of life what God never intended to be in it. Disobedient men take the good and make it bad.

One does not have to react to every desire. One may be naturally lazy but he still gets up each day and goes to work. One has a natural and driving desire for chocolate but he doesn’t eat a dozen Snickers each day. Even if an alcohol gene were found, it would not justify a person becoming a drunk. Nothing and no one forces a man to slip between the sheets with another man. and to do so is abnormal, aberrant, and abominable.

People change all the time so the counselors should not tell people they cannot change their sexual desires and practices. Of course, they can change. I know former practicing homosexuals who have changed and are living normal, happy, productive lives - with a houseful of children. If homosexuals cannot change then there is no hope for the pedophile. Moreover, if the pedophile is “born that way” and cannot change his behavior then how can prison be justified?

A black sports figure, Chris Broussard, announcer for ESPN, expressed a politically incorrect opinion for which he was symbolically drawn and quartered by the “tolerant” left. Chris said, "I'm a Christian. I don't agree with homosexuality. I think it's a sin, as I think all sex outside of marriage between a man and a woman is. If you're openly living in unrepentant sin...that's walking in open rebellion to God and to Jesus Christ."

All informed and honest Christians will agree with his incredibly courageous statement; however, those on the left who make decisions based on their “feelings” frothed at the mouth for Chris’ courage, commitment, and convictions. He was reprimanded by the channel and is no longer with them. I wonder why. After all, doesn’t everyone want diversity; doesn’t tolerance extend to Christian conservatives? I suppose not.

The fact that ESPN apologized for its announcer is positive proof that the mainstream media are master hypocrites when they speak of diversity, fairness, and equality. When a man like Chris expresses historic, sensible, and biblical views, his employer should proudly say, “See, we really believe in diversity. We believe everyone has a right to express his views even if some people are offended. We are proud of him for having the courage to express his views so eloquently.”

Pete and other homosexuals who come out of the closet are called “heroes,” “brave,” and “courageous” but that might be a little hyperbolic. It used to be that a hero was someone who risked his life dragging a fellow soldier out of danger at the risk of his own life or a firefighter who carries a child from a burning building. Not only is the world changing, it seems words are also changing.

The fact is that homosexuals don’t exist but there are heterosexuals who choose a life of perversion and rebellion against God. Let me make it clear: homosexuals, as a group, do not exist, but homosexuality does exist as it is a choice made by weak, warped, willful, and wicked people.

Growing Up Straight, a book recommended by the National Institute of Mental Health, reveals, “Scientific consensus holds that homosexuality is very largely conditioned by the environment and childhood and most particularly by parental influence in the home.”  No gay gene, no excuse.

Two researchers, Bearman and Bruckner, in the March 2002 American Journal of Sociology concluded, “Our results support the hypothesis that less gendered socialization in early childhood and preadolescence shapes subsequent same-sex romantic preferences.” The Yale/Columbia professors are saying that DNA does not determine same-sex preferences. It is life experience that shapes sexual preferences. No one is born gay. No one.

Bryan Fischer is quoted in ScienceDaily as saying, “No major gene for homosexuality has been found despite numerous studies searching for a genetic connection.” No one is born gay.

Dr. Lisa Diamond, a lesbian feminist psychologist who is also a highly respected member of the American Psychological Association, has spent years refuting the idea that homosexuality is innate and immutable. As stated by clinical psychologist Dr. Laura A. Haynes, through her publications, Diamond is declaring that “The battle to disprove ‘Born that way and can’t change’ is now over, and she is telling LGBT activists to stop promoting the myth.”

Whenever some Tom, Dick, or Pete comes out of the closet, everyone speaks of “celebrating diversity” and promoting toleration; however, no one celebrates me for being a white, pro-gun, conservative, young earth creationist, straight Christian. What am I? Chopped liver? Are we to be tolerant of leftist loonies but critical of those who lean toward the right?

Some naive Americans think Pete has a chance to become President of the United States, but they also might believe Taiwan will retake Red China, Pepsi will sell for a nickel again, and any day they’ll find Jimmy Hoffa, Judge Parker, and Amelia Earhart playing checkers in a Mexican bar with Elvis Presley.

Don’t bet the farm on it.